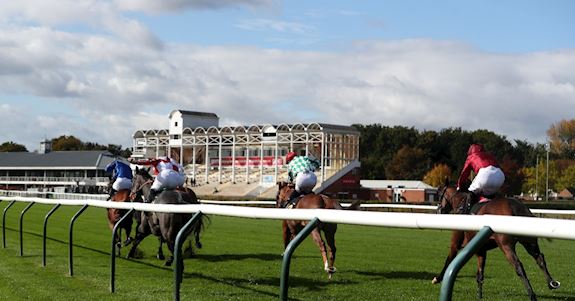 Sir Ron Priestley is reported to retain “plenty of enthusiasm” ahead of making his first start in 571 days in the MansionBet Barry Hills Further Flight Stakes at Nottingham’s first raceday of the season tomorrow (Wednesday 7th April).

The son of Australia will take to the track for the first time since filling the runner’s up spot behind Logician in the 2019 St Leger at Doncaster when attempting to give trainer Mark Johnston a record-equalling third success in the 1m 6f Listed contest.

Though five-year-old Sir Ron Priestley must overcome a lengthy absence, connections are hopeful he can develop like his half-brother, and last year’s Prix Royal-Oak hero and recent Dubai Gold Cup winner Subjectivist, and take high rank among the staying division this season.

Charlie Johnston, son and assistant trainer, said: “We are really looking forward to getting him back on track as it has been a long 18 months. He has had two separate issues, one in the spring of 2020 and another in the autumn which stopped us from getting him on track last year. This is only a starting point and it is not the be-all and end-all.

“He has never run beyond a mile and six, which this is over, but given the exploits of his half-brother (Subjectivist) and what Sir Ron Priestley did as a three-year-old hopefully he can make up into a cup horse.

“We wouldn’t have minded another couple of weeks and timing-wise something like the Sagaro or the Henry II would have fitted in better, but given the length of time, he has had off we wanted to start him over a mile and six rather than two miles.

“Hopefully this is a slightly weaker race and it ticks all the right boxes. He seems to retain all his enthusiasm and Franny (Norton, jockey) came in and sat on him a couple of weeks ago and he was pleased with him.”

Roger Charlton will rely on progressive four-year-old Win O’Clock to give him back-to-back victories in the race, having sent out Withhold to land last year’s renewal, which was re-routed to Newmarket’s July Course in August due to the coronavirus pandemic.

Charlton said: “This time last year he was rated 74 and I thought he was the sort of horse that would win a couple of races and end up 84, but not 104. He is not very big but he is a progressive horse.

“To be fair he was running in races with only two or three runners in and this is a pretty good race, so we will see how he goes.

“He has won over a mile and six, though I’m not convinced he wants that trip but there aren’t any other races for him as there are no handicaps for him and I’m not running him in the John Porter. He is fit - we will give him a run and see how he goes.”

Laafy scored on his only previous attempt over course and distance in the 2019 Colwick Cup and the Noble Mission gelding will try to fill a rare gap on the CV of trainer Sir Michael Stoute by making a winning return to action for the third season in succession.

James Horton, assistant trainer, said: “He is a solid horse that runs his race every time. Softer ground stretches his stamina over a mile and three quarters but he should be fine over the trip on good ground on Wednesday.

“It was a long time ago that he won over course and distance and he is a good few pounds higher in the handicap now. It is very tough in handicaps now for him so we are having another go at this level.

“He doesn’t do a stack at home so it is hard to gauge how he is but he seems to run well fresh and he probably saves a little bit for himself. He needs to get out and have a run and whatever he does he should come on for. He deserves to be there and he should run with credit.”

Roger Teal hopes there will be a more genuine pace on offer to help Ocean Wind resume his progression after the five-year-old had to settle for second best in a slowly run conditions contest at Kempton Park on his most recent start.

The trainer said: “It was a really muddling race at Kempton last time and they ran 27 seconds slower than standard. He just needed more pace. If we had ridden the race again we would have gone on but it just played into the hands of the winner (Rainbow Dreamer).

“It looked like he was going to finish last at one stage but when he hit top gear he was closing at the line. He has had a little break and is in good order. He never shows a lot at home - it is only when he gets to the track that he comes alive.

“It’s a nice race for us to go up and dip our toe in the water at the next level, and though it’s not a massive field it is a quality one. Mark Johnston’s horse is a quality one but I don’t know where the ceiling for Ocean Wind is.”

The six runner field is completed by the Alan King trained Raymond Tusk and Hiroshima from the yard of John Ryan.