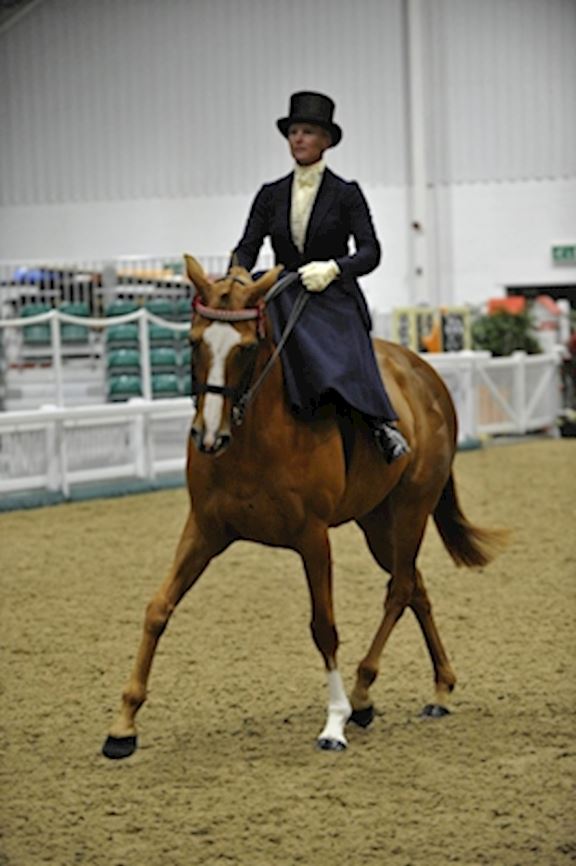 Wild West tames the judges to triumph as Supreme Champion

Six days of high quality competition at Aintree for the Retraining of Racehorses (RoR) National Championships concluded with Sunday’s Gala Evening and the crowning of the ROA and Goffs UK Supreme Champion. The coveted title went to nine-year-old gelding Wild West, ridden side-saddle by Lizzie Harris.

The final session of the ROA and Goffs UK National Showing Championships produced a memorable and emotional evening. As well as entertainment from sporting soprano Laura Wright there was a parade of champions during which it was revealed that 2016 RoR Horse of the Year, Monet’s Garden, has been retired from showing.

A son of champion sire Galileo, Wild West was initially put into training with Aidan O’Brien before moving to the yard of Jonjo O’Neill. Carrying the famous green and gold silks of JP McManus he was regularly ridden in his races by Sir Anthony McCoy, however, despite such illustrious connections, Wild West remained a maiden and was retired after seven races.

Leicestershire based Lizzie Harris took on ‘Westy’ straight out of training from Jonjo O’Neill’s yard in 2013. A former amateur jockey herself, who is now a point-to-point trainer, Lizzie began schooling and retraining Wild West in early 2014 and together they have been hunting, team chasing and eventing, but it is in showing that the pair have enjoyed most success.

Prior to the Elite Series Final, there was a parade of former racehorses who had enjoyed success both on and off the track, including big names such as Barbers Shop, Grand Crus, Peddlers Cross, Annacotty and Monet’s Garden.

The nineteen-year-old Monet’s Garden, a multiple winner at Aintree on the track, had won the RoR Veteran Class at the 2016 National Championships prior to being named RoR Horse of the Year. During the parade it was announced by Jo Richards that Monet’s Garden was retiring from competition. It is hoped he will continue to make public appearances out of competition.

Expanded this year to incorporate the RoR National Dressage Championships, 290 horses competed across the six days of competition in the Aintree International Equestrian Centre.
RoR Chief Executive, Di Arbuthnot said: “It’s been a wonderful week and the standard throughout has been very high. All the judges I spoke to commented on the improvement they are seeing from both horses and riders year-on-year.

“Sunday’s Gala Evening remains a special night. Our thanks to the ROA and Goffs UK for their sponsorship and to Laura Wright for her beautiful singing and to Chanelle McCoy for coming and judging two classes.
“We have had brilliant support and help from Aintree and special mention should be made of Carly Sage and her team and our own National Co-ordinator, Anne Walker, without whom the RoR National Championships would not be the success it has become.”