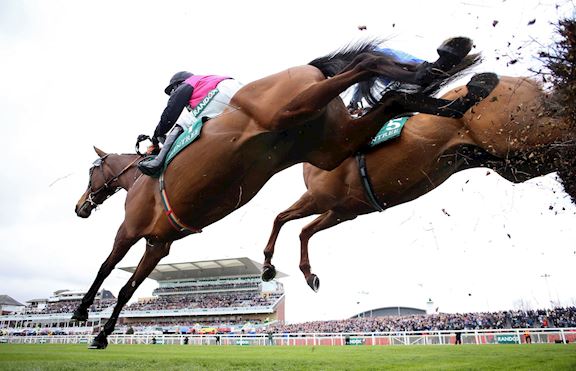 The wind and the rain weren’t going to dampen the spirits of today’s event where we welcomed racegoers back to The Randox Grand National Festival for the first time since 2019. It’s certainly been a day to remember. Here are all of our Grand Highlights from opening day.

OFF TO A GREAT START

The day kicked off with our Opening Ceremony. This year we saw the Retraining of Racehorse Parade, where we welcomed previous Grand National runners such as Highland Lodge who came 10th in 2019.

Laura Wright, Soprano singer, along with the Alder Hey choir gave a special performance as we were joined by 10,000 guests representing the NHS. It was an unmissable start to the festival.

FOR OUR REAL LIFE SUPERHEROES

Irene Axon, 64, a senior Community Fundraising Manager at Alder Hey Children’s Charity spoke about her excitement of being at Aintree today: "We've had amazing support from The Jockey Club. I've been at Alder Hey Children's Charity since 1995 and I don't ever remember a time when The Jockey Club didn't support us and then of course the past 20 years the relationship with The Jockey Club has just grown and grown. So to be here today on this glorious race day with 10,000 of my NHS colleagues, it's magical.”

We donated 10,000 tickets to the NHS and social sector in Merseyside for today’s race day, in recognition of the hard work and commitment of the dedicated NHS and professional carers who are working tirelessly for COVID-19 patients.

Crowds returned to the meeting for the first time since 2019, due to the pandemic, and Axon excitedly said she was "giddy" to attend the event with NHS colleagues.

There aren’t many seven time winners in any sport. But star mare Epatante scored at Grade One level for the seventh time in her career to land the Grand One Betway Aintree Hurdle.

Winning jockey Aidan Coleman said: “She’s a high-class mare and it’s been a great training performance by Nicky for the whole season. I didn’t ride her any differently really over the longer trip because you can ride her any way you want. She’s so good that you can do anything you want on her.”

“She’s won Grade 1s left-handed at Newcastle, right-handed at Kempton, a Champion Hurdle left-handed and undulating, and now this. Whatever you want she’ll do it. She’s just very good.”

STAR OF THE SHOW

2021 saw Latenightpass narrowly miss out on Randox Foxhunters Chase win. But a year later, and the crown belongs to him and jockey Gina Andrews. This makes Andrews only the sixth female rider to win the contest to add to her current title of the most winning Lady Point to Point Jockey

The nine year old is trained by Tom Ellis, Andrew’s husband. And the pair came home a length and a quarter clear of Cat Tiger.

Thrilled with her win and her performance, Andrew’s said:

“It’s everything (winning this) - as much work goes into a point-to-point yard as a National Hunt yard. We’ve got a great team at home and they work really hard, and I’m just glad that it has all finally paid off. This is the biggest one of all and we’ve won it.

“It’s everything I’ve ever wanted. I’ve ridden a Festival winner, which was all I ever wanted, and for a long time now I’ve said this is the race I’d love to win. Dad (Simon Andrews) won it so now I’ve got one up on him again!

“I don’t think I was born when Dad won it. It’s brilliant - I’m so pleased. It’s a real family affair - my husband Tom rode this horse’s mother in races and obviously my mother-in-law bred him; we’ve got his sister at home and two other brothers as well. It’s a fairytale, really.”