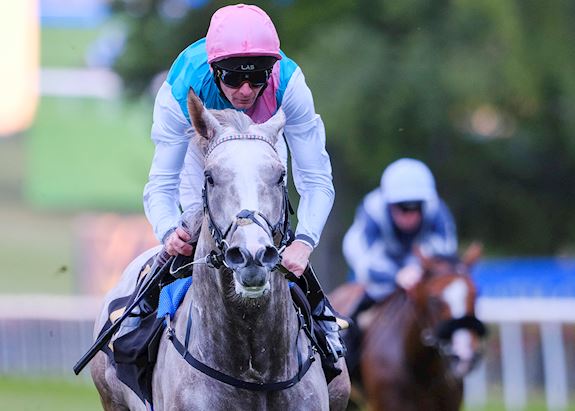 Jockey Robert Havlin is looking forward to being reunited with Logician in the Close Brothers Fred Archer Stakes at Newmarket tomorrow (Saturday 26th June) and insists the 2019 St Leger winner is still showing “great enthusiasm for the game”.

Life has not been plain sailing for the John and Thady Gosden-trained son of Frankel since his Classic success on Town Moor after he was forced to miss the early part of last season while recovering from the potentially life-threatening condition peritonitis.

After finishing an encouraging third on his seasonal return in a Group Three at Newbury last month, Logician will now attempt to build on that effort back down at Listed level on his first outing under Havlin since the pair claimed a novice contest at the July Course in June 2019.

The jockey said: “It is great to get back on him and he is a nice horse to pick up. I rode him on Wednesday and he felt in great shape and has come on since the last day.

“He is a big horse that is hard to get fit and the whole way through it has always taken a run to get him right. He seems to have come out of his race the right way.

“If there was any time that he didn’t want to race again we wouldn’t have risked it but he is showing great enthusiasm for the game again and let’s hope it continues.

“There are a few horses in there that are decent on their day but he is clear on ratings and we are hoping for a big run.”

Meanwhile Tom Marquand hopes the application of a visor can have the desired effect on the William Haggas-trained Pablo Escobarr. The five year old was last seen when failing to beat a rival on his return in the Group Two Jockey Club Stakes on the Rowley Mile at the start of May.

Marquand said: “I galloped him in headgear 10 days before Ascot and he went great in it. He feels great and I’m hoping his last run we can put a line through.

“It was his first run back and he is a big horse so he might have needed it a bit. He is a super horse and he has shown a high level of form on quite a few occasions. If he brings his best he should run well.”

Ralph Beckett believes the mile and a half contest represents a good starting point for Max Vega, who will be making his first appearance since finishing down the field in the Group Two Long Distance Cup at Ascot in October.

He said: “Any rain that falls will be a big help to him. It looks a good place to start him.

“We’ve had to be patient this year as he hasn’t quite been himself. Things of late have been different and he has definitely picked up. He does get a lot further than this but a mile and a half on the July Course to start off with will be ideal for him.”

Kinross returned to winning ways on his most recent start with victory in the Group Three John Of Gaunt Stakes over seven furlongs at Haydock Park and Classic-winning handler Beckett is confident the Kingman gelding can score again at the same level and distance in the Close Brothers Criterion Stakes.

Beckett said: “Kinross is in great shape. It is a race that he has got a penalty in but it is a race that really suits him. I’ve been very happy with him since Haydock where he looked back to his old self.

“He did it really well the last day and we will be sticking to seven furlongs with him. I think gelding him has been a significant help. Hopefully this is a stepping stone to bigger and better things.”

Richard Hannon is counting on a return to the July Course sparking a revival from Motakhayyel who is seeking a first success since landing last year’s bet365 Bunbury Cup over course and distance.

Hannon said: “He is quite high in the handicap and he would have had a lot of weight at Royal Ascot. He likes the track here and he is working well and hopefully he will run a big race. When he is in form he is hard to beat and I hope he is and he seems like it at home.”

Hannon also expects the step back up in trip to benefit Mums Tipple following his disappointing effort over six furlongs out in the Listed Cathedral Stakes at Salisbury 13 days ago.

He said: “Mums Tipple was disappointing last time but he hung a good bit that day and he never got in the race. This is a nice race for him and stepping up in trip again should help him as he looked like he was a bit flat out in the Cathedral Stakes.”

The William Haggas-trained With Thanks finished behind Kinross at Haydock Park, but Classic-winning rider Marquand feels the Camacho filly can finish a lot closer this time around if the rain arrives in time.

He said: “She ran a little bit free at Haydock but that was her first run back and she was entitled to need it. I thought she ran super and the way she went through the early part of the race hopefully it has knocked some of that gassiness out of her and puts her in a good spot.

“It was pretty desperate ground when she won her maiden and her Group Three in Ireland so a drop of rain would be ideal.”

George Boughey expects the return to a sounder surface to play to the strengths of recent Albany Stakes fifth Cachet in the Listed Maureen Brittain Memorial Empress Stakes.

He said: “It is a quick turnaround from Royal Ascot but she has come out of that race in great shape. I walked the track on Thursday and it is far quicker than at Ascot where it was an extreme of ground. It probably found her out and it was only her ability that got her home.

“She has got a great attitude and she showed that on debut when quickening away well on better ground on the Rowley Mile and the ground is closer to that here. She will improve when she goes up to seven but hopefully she can get some black type here.”

The Simon and Ed Crisford-trained Najat made a striking impression on her debut at Thirsk, and connections believe she will not look out of place when putting her unbeaten record on the line.

Ed Crisford said: “She won very well first time up at Thirsk and she is deserving of her place in a stakes race and this looked a suitable option.

“She was breezing nicely before her debut but I like the way she put the race to bed quickly at Thirsk. The way she won at Thirsk there could be a lot of upsides to her.”

Lovely Mana is anticipated to build on her debut third at Salisbury when stepping up to six furlongs for the first time, according to Andover handler Beckett.

He said: “It was a good debut effort at Salisbury and she will have learned plenty from that day. It will not be easy for her but she is a filly that we like. The form of her first run has a bit of substance to it and she should be well suited by stepping up to six furlongs.”

System filled the runner’s up spot on her racecourse bow at Salisbury 13 days ago and Classic winning trainer Hannon is optimistic the Galileo Gold filly can go one better.

He added: “I thought she had the race won at Salisbury but she took one on quite a long way out. She got to the front and appeared to have the race, but then a Shadwell horse (Alflaila) beat her. Hopefully she will run well as she will improve for that first run.”

Desert Dreamer lost her unbeaten record when tasting defeat in the Queen Mary Stakes at the Royal meeting, but trainer Stuart Williams believes a line can be put through that effort.

Williams said: “She didn’t have a hard race at Ascot as we were on the far side and the near side had gone. She is in very good form and we will try and win a Listed race with her.

“Hopefully we can put a line through her last run. She didn’t beat those on her side so I can’t say she was just unlucky for being drawn on the other side, but we got out of our ground early on as they went so fast. If she comes back to what she showed on the Rowley Mile she would have a good chance.”