Newmarket is a place like no other. This stunning, expansive landscape, the largest area of cultivated heathland in the world, is home to both the two world-class courses which comprise Newmarket racecourses and also to the oldest horseracing institution in the world, The Jockey Club. No wonder Newmarket is also affectionately known in the horseracing world as “Headquarters”.

In 2016 Newmarket Racecourses reached a very special anniversary – the 350th year since the Newmarket Town Plate race was first run in October 1666. This was by no means the first, or only, 17th century race to be run on Newmarket’s venerable turf, neither is it the oldest English horse race still in existence. However, the annual Newmarket Town Plate was the first organised race which was run to an official set of rules, rather than to ad hoc ones made up locally. The rules, or Articles, for the Town Plate were set out by King Charles II himself on 16th October in the “17th year” of his reign (1665) and this made them universally binding. Therefore, it is considered that all formal, modern horse racing dates from this time, 350 years ago.

Moreover, the Newmarket Town Plate is a race that is available to all amateur jockeys over 16 years old. This was an exceptional thing in earlier times. For example, until 1972 this was the only registered race in which female jockeys could compete. In Newmarket, the race became a town institution. People still recall how the whole town would close down for that afternoon each year and everyone would make their way to the Racecourse to watch the Newmarket Town Plate.

From the earliest times people travelled the Icknield Way across Newmarket Heath.  The fresh water sources in the area originally drew people to settle here. Stone Age, Bronze Age Iron Age peoples, Romans and Anglo-Saxons all left archaeological evidence of their occupation in the Newmarket and Exning area. It is possible that horses were raced on Newmarket Heath by the Iron Age Iceni tribe because the Romans recorded that the tribe bred, sold and sometimes exported, fine horses and dogs. Records show that the Anglo-Saxons had horseracing in their culture, although not as an organised sport. Their lasting legacy is a significant landmark, a gigantic earthwork known as ‘The Devil’s Dyke’, built circa the 6th - 7th century AD, which runs beside the July Racecourse and stretches for 7.5 miles between the villages of Reach and Woodditton. This dyke the largest of 5 such archaeological defensive structures in the wider East Anglian landscape. It was designed to fill the vulnerable gap between fen and forest.

Newmarket gained its Royal Market Charter in 1200 AD. Its twice – weekly market and the later annual fairs prospered the local community. The economy of the manor of Medieval Newmarket was based around farming and the business of refreshing and accommodating travellers. Hence, this singular place unexpectedly facilitated the later growth of the horseracing and horse breeding industries in Newmarket. Long before racegoers came to the town, there were many little one room pubs (over 40 at one time) and several larger inns, all eager to welcome the weary traveller. Brewing ale was a particularly important trade at the time as water was generally considered unsafe to drink and everyone, even children, drank ale. The medieval townsfolk rented small farms known as ‘burgage plots’ which were strips of land running off the High Street. These consisted of a small house and parcel of land on which they grew crops and kept some livestock.

The town and the Racecourse have always been interdependent, both providing for and prospering from each other. After horseracing began to be organised here the medieval burgage plots were essential for the creation of the numerous stables in Newmarket. The plots of land already had the room for the construction of both a dwelling house and stables behind it. Smaller plots could be joined together to create more space. Likewise, the expanse of heathland surrounding the town provided space and resources for the growth of more stables and the important and closely related, bloodstock breeding industry. However, the essential catalyst which enabled all this to happen was the extraordinary Royal Patronage that Newmarket and its racing have enjoyed for centuries. 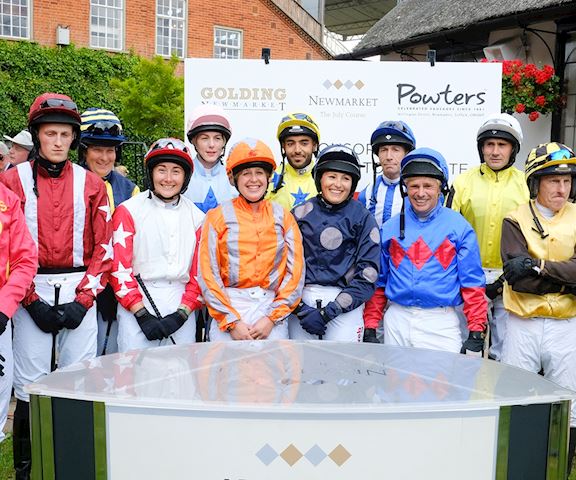 See how you can take part in this historic occasion. Become part of history!