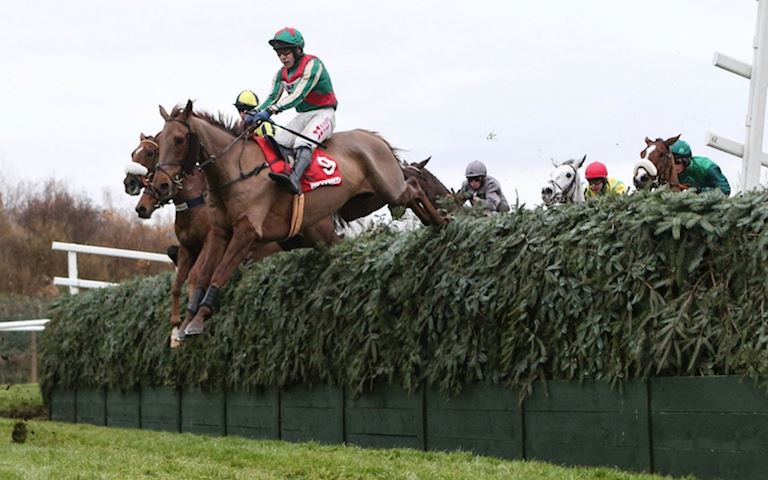 all Chase at Wetherby on November 4.

Pipe said: “Vieux Lion Rouge ran well at Wetherby and has improved for that run. Blaklion looks the one to beat and it’s a case of the softer the ground, the better for Vieux Lion Rouge.

“Touch wood, he jumps the Grand National fences better than park fences and I think we go to Aintree on Saturday with a good chance.

“The horse hasn’t got the trip in the Grand National for the past two years, although he ran well for longer this year. He is eight turning nine and hopefully that will help him come April next year.”

Nicholls said: “As De Mee goes in the Randox Health Becher Chase. I have left him in the Grand Sefton as well, just in case the ground gets very testing, but I intend to run him in the longer race.

“He has run three times over the Grand National fences, winning the Grand Sefton last year, but I am confident that he will stay the Becher Chase.

“He won over three and a quarter miles at Kelso earlier this season and I have been pleased with him. He loves the fences and the Becher looks the right race for him.

“Vicente won’t be running the Becher Chase but he could head to Aintree for the Many Clouds Chase instead. I was very pleased with him at Cheltenham and he has come out of that race well.”

The weights are headed by The Last Samuri (Kim Bailey, 11st 12lb), who was runner-up in the 2016 Grand National and third in this race last year.

Here's some of the leading contenders for the Randox Health Becher Chase:

Paul Nicholls and David Pipe will also be represented in the other race over the Grand National fences on December 9, the £70,000 188bet.co.uk Grand Sefton Handicap (3.10pm, 22 confirmations) over two miles and five furlongs.

Nicholls is responsible for ante-post favourite Sametegal (11st 5lb), who returned from a 20-month absence last time out with an encouraging to second to Guitar Pete in a Listed handicap chase at Wetherby on November 3.

The trainer said: “Sametegal missed a lot of time but ran a very good race on his reappearance at Wetherby.

“The 188bet.co.uk Grand Sefton has always been his aim – he hasn’t run over the fences but jumps well.”

Pipe’s contender Rathlin Rose (10st 7lb) will also be making his debut over the Grand National fences. He was last seen out finishing third in Southern National Handicap Chase at Fontwell Park on November 19.

Pipe said: “Rathlin Rose could run well with his low weight. He won the two military races at Sandown last season for Guy Disney and the softer the ground, the better for him as Saturday’s trip might be a bit on the short side.

“He will schooling over the two replica Grand National fences at Pond House this week and we are looking forward to running at Aintree.”

There was two millimetres of rain on Saturday. The forecast is for settled and mild conditions up to the middle of the week, with wet and windy conditions following on Thursday. Colder temperatures are predicted into the weekend.

This is a continuation of what was done on each day of the Randox Health Grand National Festival in April.

Tickets and hospitality for Becher Chase Day are available to purchase here or by calling 0344 579 3001.

If you are 18-24, you can go FREE to this fixture by signing up and purchasing a RacePass ticket online at  www.racepass18to24.co.uk.