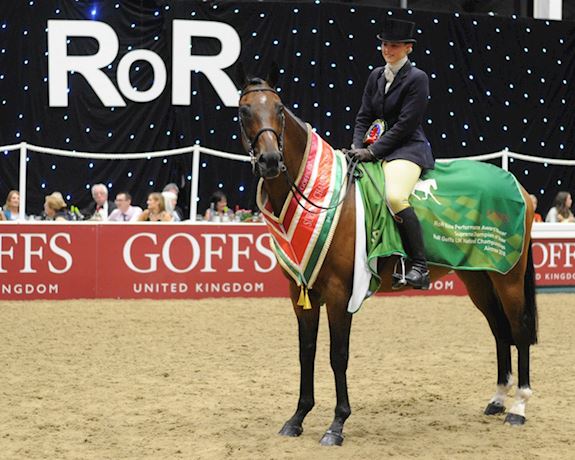 Six days of high quality competition at the RoR Goffs UK National Championships concluded on Sunday with the final evening performance under lights in the Aintree International Equestrian Centre. The ninetieth and final class saw the coveted title of Goffs UK Supreme Champion 2018, together with a first prize of £2,500, awarded to What Of It, ridden by Hannah Horton, an achievement that crowned a fantastic season for the pair.

The 15-year-old gelding, already the winner of the RoR Tattersalls Show Series Championship at Hickstead in June, was adjudged Supreme Champion by a panel of judges including jockey Nico de Boinville. What Of It and Hannah Horton beat a strong field that included three previous Supreme Champions.

During a racing career spanning eight years, What Of It won four Hunter Chases and four Point-to-Points before being retired in 2015. In the show ring the son of Tel Quel has previously qualified for Horse of the Year Show (HOYS) but victories at Hickstead and now Aintree have taken his and Hannah’s successes in the show ring to another level.

What Of It is a true family horse, he remains in the ownership of his former trainer Sarah Ward and her son Tom, who rode him to victory in three of his Hunter Chase wins and is assistant trainer to Richard Hannon. Equipped with an impeccable temperament, What Of It regularly escorts young horses out hacking and has also done some arena eventing, some cross-country and trained-up several Pony Club members.

This year was the fourth running of the RoR Goffs UK National Championships. A record number of over 300 horses competed in 90 classes at the six-day event, sponsored by leading bloodstock auctioneers Goffs UK. Highlights included the RoR Dressage Series Championships and the RoR National Showing Championships, as well as a range of classes open to all former racehorses registered with Retraining of Racehorses (RoR), British racing’s official charity for the welfare of retired racehorses.

Scooping up two of the principle prizes in the dressage championships was the 17-year-old gelding, Jimmy Hay, ridden by Jenny Bulman, a horse that epitomises the benefits of giving former racehorses a second career. In four races in 2004, Jimmy Hay only managed to beat two horses, finishing plum last on three of his four runs. Fourteen years after retiring from racing his career is at an all time high with his Aintree wins adding to his two existing RoR Elite Dressage titles presented at the RoR Awards in 2016 and 2017.

At last year’s championships, Lizzie Harris enjoyed a week to remember as she and Wild West won several classes culminating in being crowned 2017 Supreme Champion. This year she rode the 11-year-old Lough Inch to victory in four classes, including the valuable RoR Jockey Club Novice Show Horse Champion-ship. Like Wild West, Lough Inch was formerly trained by Jonjo O’Neill, however, before turning his hand to showing, Lough Inch won a remarkable nineteen Point-to-Point races and is now proving equally adept in the show ring.

As well as former Cheltenham Gold Cup winner, Don Cossack, other horses better known for their exploits on the track who were in action at Aintree included Noland, who won first prize in the Glamour Stakes, Time For Rupert and Always Waining, who both recorded several placed efforts in the show ring, and the popular chaser Monkerty Tunkerty, who together with his owner and trainer Jess Westwood, took part in and was placed in a range of classes.

Looking back over the six days, RoR Chief Executive, Di Arbuthnot, said: “It has been another wonderful week. The standard improves each year, in particular with regard to the showing, and it never ceases to warm the heart seeing the horses so wonderfully turned out and the pleasure evident among the riders from just competing at these championships.

“Our thanks to Goffs UK for their sponsorship and Aintree Racecourse for hosting the event and their wonderful all-year-round support for RoR. Special mention should be made of Carly Sage and her Equestrian Centre team and our own National Co-ordinator, Anne Walker, without whom the championships would not be the success they have become.”