A huge mural of legendary race horse Red Rum by acclaimed street artist Paul Curtis has been unveiled in Southport.

The mural covers more than 270 square metres and has been commissioned as part of Sefton’s Borough of Culture celebrations for 2020. 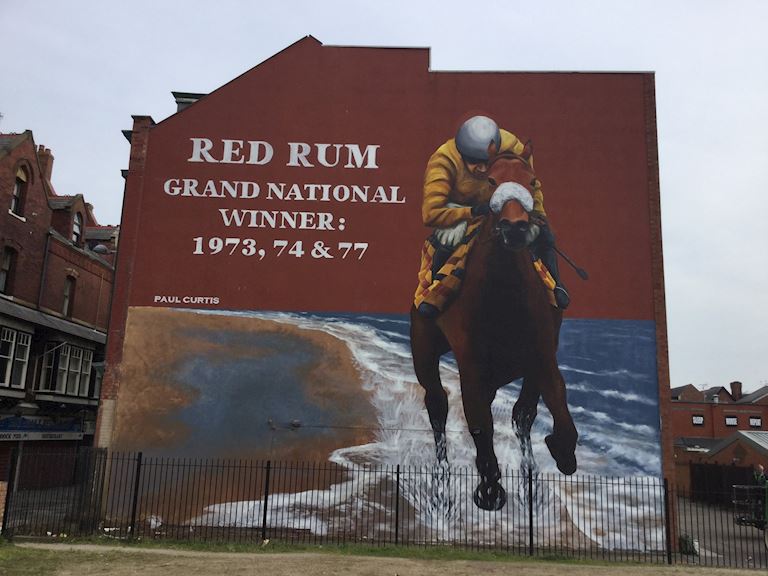 It depicts Red Rum training on Southport beach and highlights how the horse, trained by Southport’s Ginger McCain, went on to win the Aintree Grand National three times – 1973, 1974 and 1977. A feat that has never been equalled in the history of the illustrious race.

Artist Paul Curtis, who painted the iconic Liverbird wings in the Baltic Triangle in Liverpool, took just over a week to complete the amazing piece of artwork located on a gable wall at the top of Scarisbrick Avenue by the Promenade.

Liverpool based Paul Curtis said: “This is by far the biggest mural I have completed and one of the most enjoyable to do.

“A lot of planning went into the design of the artwork and I was able to capture Red Rum galloping is the sea with the Southport sands in the background.

“Red Rum is part of Southport’s and the Grand National’s heritage and it was a privilege to paint such an iconic horse as part of Sefton’s Borough of Culture celebrations in such a prime location.

“Such is the size and scale of the mural you can see it from a great distance away, and I hope it will form part of a continuing legacy of Red Rum remembering what he achieved as a race horse and his training on Southport beach.”

Mayor of Sefton, Cllr June Burns, added: “This really is a remarkable piece of artwork.

“Considering the current national situation, I hope the mural really paints a positive image for everyone as part of our Borough of Culture year.

“Thanks to Paul Curtis for creating something amazing that will form a legacy of our Borough of Culture year.”

The Borough of Culture (BoC) title is awarded by the Liverpool City Region’s Combined Authority to one of its six local authorities (Halton, Knowsley, Liverpool, Sefton, St Helens and Wirral) on a rotating, annual basis. Sefton has the prestigious honour for 2020.