Monday’s eagerly-awaited meet gives leading professionals, up-and-coming apprentices and amateur jockeys the chance to shine. And on a night of Girl Power, Spice Girl Melanie C will entertain at the annual Party In The Paddock with a special post-racing DJ set. 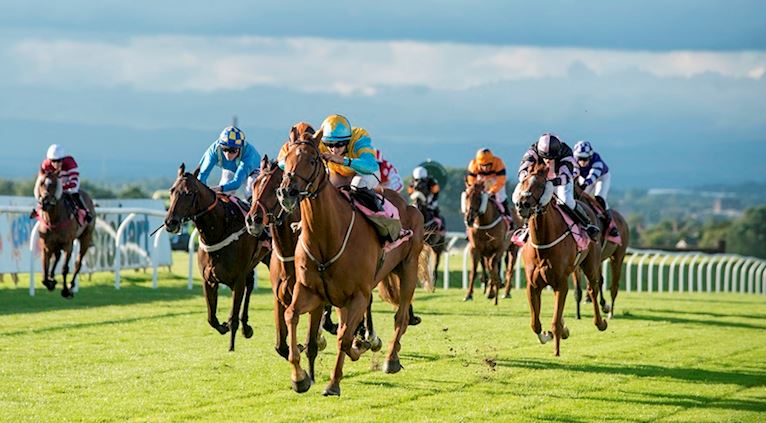 On the track, Rachel Richardson (pictured above romping home on Parole at last year's meeting) rides through Monday’s seven-race card as she looks to emulate her achievements in 2017 when she was a double winner.

The North Yorkshire-based rider will face some stiff competition from other leading female jockeys, with in-form Paula Muir also claiming seven mounts and there are six for sport great Hayley Turner.

Richardson was a winner at Musselburgh on Friday with a 4/1 shot for Tim Easterby taking her to 19 victories for the year. Last year’s successes also came on Easterby trained entries and on Monday she has Mischief Managed, Revenge and Storm Ahead from his Habton Grange stable.

Mischief Managed was twice a winner in May over seven furlongs and will be among those fancied in the Smarkets Betting Exchange Handicap over 6f.

Apprentice Paula Muir is in the form of her young career. The 23-year-old recently landed a double at Redcar to go alongside July wins at Ayr and Thirsk.

Three of Muir’s rides are for Michael Dods with Mininggold in the 5f opener likely to be among the favourites.

Turner returned to the saddle this year after retirement in 2015 and is closing in on 800 winners during an illustrious career.

The rider, who enjoyed her first winner in 2000, has three entries for Johnny Murtagh. Circling Moon in the night’s penultimate race over 2m 1f was a winner last time out at Chepstow over a slighter shorter distance and has also been victorious at Leopardstown and Gowran Park this year.

At the other end of the career spectrum, teenage sisters Abbie and Ella McCain, both apprentices and winners at last year’s Ladies Night meeting, have five rides between them.

Ella, 17, won at Carlisle in her very first race and returns on that horse, Dark Confidant, in the News & Star Amazing Lady Kerryanne Wilde Handicap over 1m 1f. Meanwhile Abbie, 18, will be looking for history to repeat when she rides Diamonds A Dancing in the evening’s final race, which the pair won last August.

Amateur jockey Catherine Walton is another previous winner at the all-female meeting and is delighted with how interest has grown each year.

Walton, a victor in 2015 on Phil Kirby’s Call It On, has four chances on Monday.

She said: “Everyone looks forward to this. I think I’ve ridden in it every year and now you can see a lot of bigger trainers are getting their horses entered, like Johnny Murtagh this year.

“It’s a brilliant initiative and so well supported. It’s always a really good evening and they have the music on as well.

“I’ve always liked riding at Carlisle, although it’s a stiff finish in those final furlongs.

She added: “There are so many female apprentices now it’s hard as an amateur to get a ride but it’s great to have a few to look forward to.”

All jockeys in the field will be competing for the Durdar Trophy, awarded to the evening’s most successful jockey.