The four-year-old is one of 13 runners in Wednesday afternoon’s top prized race, The Smarkets Handicap Stakes over 5f. 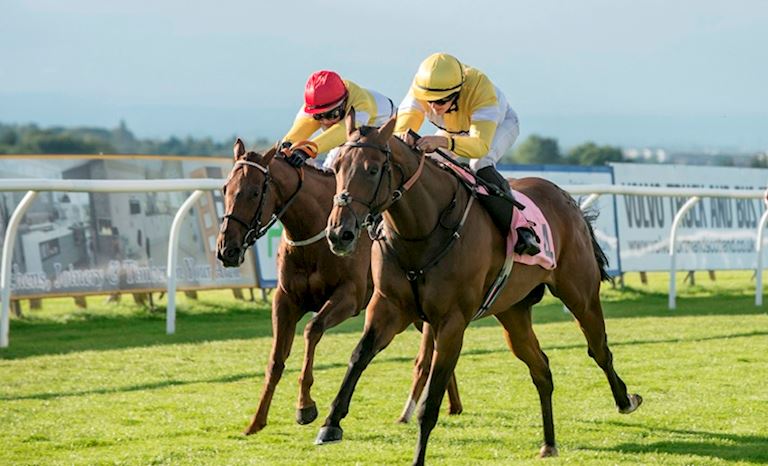 And Suitcase ‘n’ Taxi (pictured above) is among several contenders in the eight-card afternoon meeting with impressive histories at the Durdar track.

The gelding was a winner over the same distance in June, leading in Mythical Spirit by one length. And at last August’s all-female jockey meeting, he was brought home by Rachel Richardson.

There’s also been a win this year at Thirsk but a disappointing last trip out at Doncaster.

Jennie Candlish’s Show Palace is another in that race with a Carlisle success under his belt, winning over the same distance in July 2017; one of 10 flat career victories.

Ruth Carr’s Foxtrot Knight and Michael Dods’ My Name Is Rio are also likely to be well fancied.

And there’s no shortage of previous Carlisle winners on the rest of the card.

In the opening handicap stakes, Tony Coyle’s Maureb can add a fourth victory in Cumbria in as many years and Ypres for Jason Ward could add a third.

There are also plenty of opportunities for the course’s leading 2018 flat performers to add to their successes.

For the jockeys, last year’s number one, Ben Curtis, again leads the way in 2018 with seven winners. He’s booked for six rides with Bellick, in the Jockey Club Grassroots Flat Sprint Series Qualifier, and a winner last time out at Navan, likely to be a strong contender.

Sioux Frontier was a close fought winner at Hamilton in June over slightly longer distance when Hamilton was again in the saddle.

Fahey is joint leading trainer at the course this year alongside Roger Fell. In the same race, Fell has Plansina, a flat winner twice so far this year, including last time out over a mile at Thirsk.

There’s another intriguing match up in that race with last year’s one-two, Savannah Moon for Kevin Ryan and John Davies’ I’m Dapper Too, again in the running.

Davies’ seven-year-old may have been bettered that day, but he’s another with a liking for Carlisle, notching three previous wins, the last in July 2017. Savannah Moon claimed a win at Pontefract in May over 1m 2f.

Elliott has four, including Falak, a winner this month over hurdles at Kilbeggan, going in the day’s closing race over 1m 6f. Fellow County Meath-based trainer McConnell has three with Building Year in the first, Blankiedoodie in the 1m 1f handicap stakes and Bellick.

The day’s furthest traveller is set to be Hogan’s Arabic Channel in the second, travelling 292 miles from County Tipperary.

Molly Dingwall, Carlisle Racecourse’s General Manager, said: “We’re all set for another exciting afternoon of flat racing with lots of our leading trainers and jockeys looking to add to their tallies for the year.

”With eight well contested races, we’re expecting an afternoon of great entertainment for all our visitors.”