No fewer than three Grand National hopefuls are entered to run in the Veterans' Handicap Chase at Carlisle this Sunday. 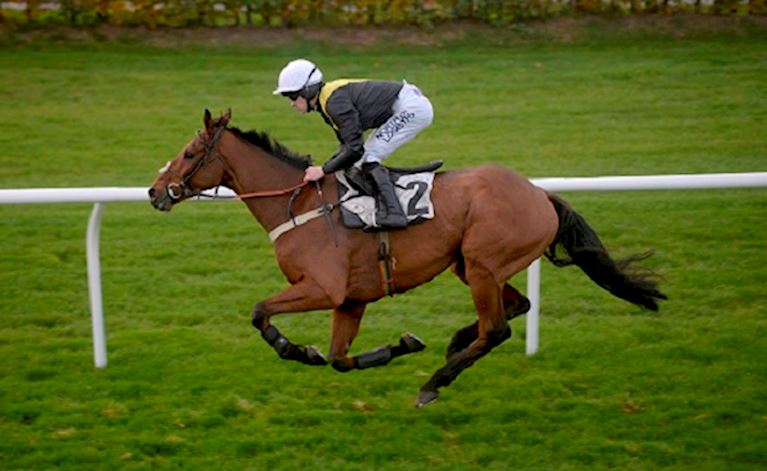 The Sandy Thomson-trained Seeyouatmidnight (pictured above) is no stranger to Carlisle where, in November 2016, he was in imperious form when winning Cumbria’s premier jumps prize – the Colin Parker Memorial Intermediate Chase – by 12 lengths.

The 10-year-old has not run since last March as he has had to overcome a suspensory ligament problem and has also undergone a wind operation.

Now back to fitness, Seeyouatmidnight must make his season debut before April 9 in order to qualify to run in the National on April 12.

Berwickshire-based trainer Thomson said: “He’s going really well. The issues he’s faced are well documented but he’s looking good so we’re looking forward to seeing him back out there over the jumps.

“We’ve done as much as we can without racing him. We had hoped to race him sooner but bad weather (and abandoned meetings) in recent weeks put pay to that. But, as I say, he’s in fine shape.

“We like Carlisle. The jumps course is a really good test, particularly for younger horses, and we’ve had a lot of success there over the years such as the Colin Parker back in 2016.”

Seeyouatmidnight looks set to be partnered with Brian Hughes who rode him to victory in the Colin Parker and is Carlisle’s leading jockey this season with seven wins.

However, the pairing will not have it all their own way in the 3m½f chase.

Houblon Des Obeaux – a two-time Gold Cup runner – finished 10th in last year’s National, behind One For Arthur. And the Venetia Williams-trained 11-year-old could again be partnered by jockey Charlie Deutsch if he gets the run at Carlisle.

Patrick Griffin-saddled Maggio finished 10th in the National in 2015 and won at Aintree a year later in the Betfred Handicap Chase. The 13-year-old has not placed in his last six outings since and will be looking to rediscover his form ahead of any Aintree bid.

“Seeyouatmidnight was a very popular winner here when he won the Colin Parker back in 2016. He’s been out for some time and it will be great to see him back racing. There are plenty of people who fancy him to do well in the National.

“Over the years many owners and trainers have used Carlisle as an important stepping stone towards Aintree and Cheltenham.

“Benie Des Dieux and Mister Whitaker, who both won here at Carlisle before Christmas, triumphed at Cheltenham on Tuesday in the Mares Hurdle and Novices Handicap respectively.

“And, of course, on Friday, Definitly Red and Saphir Du Rheu, who have also both won at Carlisle in recent years, go for glory in the Gold Cup.

“Sunday should be a cracking meeting here at Carlisle. We have six races and some really strong entries. And, as this is our first weekend meeting of the year, we are hoping for a big crowd and some nice weather. It should be a great day.”