Rising star Lostintranslation produced a jumping masterclass to win Carlisle’s most prestigious race of the season. 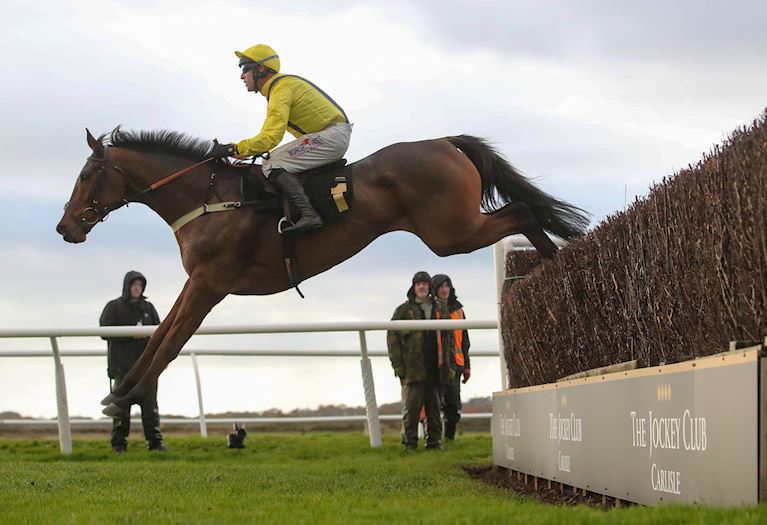 In doing so he not only emulated such racing greats as Many Clouds, by winning this coveted Class One race, but he also cemented his place as a genuine Gold Cup contender.

Lostintranslation is now rated as short as 7/1 for Cheltenham’s blue ribband steeplechase.

He was saddled to victory by Tizzard’s son and assistant Joe who told a packed winner’s enclosure that this special gelding is “our next big thing”.

Joe said: “He’s a great looking horse and he’s got a huge engine. We had this race in mind from the end of last season as it’s a perfect stepping-stone for bigger things.

“We’ve held him in such high regard all the way through (his career) and we’ve probably put ourselves under pressure by doing so but we think he’s our next big thing.

“He’s a big lad and has a lot of power, but he’s also a clever horse who makes it look effortless. We’re delighted he ticked all the boxes today.”

Sent off at odds-on favourite, Lostintranslation was never troubled in the 2m 4f race. After dominating all the way he was eased down by jockey Robbie Power to beat Nigel Twiston-Davies’ Count Meribel by two-and-a-quarter lengths.

He will next race at Haydock Park and then the King George VI chase, in December, before the Gold Cup in March.

Molly Dingwall, General Manager at Carlisle Racecourse, said: “That was quite simply one of the best jumping displays I’ve ever seen. We’ve witnessed an undoubted star of the future here today and this race will live long in the memory.

“The Colin Parker is a very special race for Carlisle. It’s named after the beloved former jockey and trainer and has featured some really big names in racing down the years.

“Today we’ve seen another star and we cannot wait to see what this special horse does next. After his performance here who would bet against him for the Gold Cup?”

Cumbrian trainers enjoyed a great afternoon in the day’s other six races.

Glenduff, trained at Nicky Richards’ Greystoke yard, made a superb hurdling debut. The five-year-old, partnered by jockey Brian Hughes, held off the challenge of hot favourite Faustinovick to land the day’s opening race.

Dianne Sayer’s Frightened Rabbit then won his third race of the season. The Penrith-trained seven-year-old powered up the home straight to beat Jonjo O’Neill’s Maypole Class by two and a half lengths.

And Maurice Barnes was all smiles as his eight-year-old chaser Bafana Blue romped home by six lengths to win the day’s endurance test – the 3m 2f Cumberland Handicap Steeplechase.

Two For Gold was always in control as he won the The Gordon Richards Steeplechase with I’m To Blame second and Richards-trained Chapel Stile finishing well in third.

Carlisle’s next race meeting is on Monday November 11. Tickets for the Remembrance Day meeting are priced at  £15 for adults (in advance) or £18 (on the day). Under-18s free entry when accompanied by an adult. Members of the Armed Forces, both serving personnel and veterans, can get in free on the day.

For full details go to carlisle.thejockeyclub.co.uk