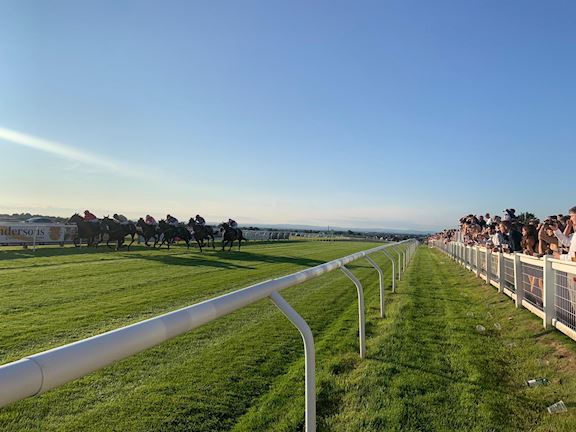 There was a bumper turnout at Carlisle on Monday evening for its hugely popular VL Aesthetics Ladies Night – which consisted of eight races exclusively for female riders. The fixture also celebrated people who have gone above and beyond to serve the community, with each race on the night named after them.

This racing game is easy!

The story of the evening came in the second race on the card, the VL Aesthetics Honours Shona Cunningham Handicap, which saw the 25-1 chance Lord P cause a huge shock for the Fergal O’Brien team.

Seeing O’Brien in the winners’ enclosure at a Flat racecourse is a story in itself, but that paled in comparison compared to the story in the saddle – as it saw 16 year old Fern O’Brien pick up her first winner from her first ever ride.

O’Brien looked like a seasoned professional when steering her dad’s charge to a three and a quarter length success and the youngster – who collects her GCSE results in 13 days – could not hide her delight.

She said: “It was a bit of a steering job to be honest! He’s very good and it was just very easy, I didn’t need to do much more than push the button.

“When the entries came out and I saw the jockeys I was up against I was so daunted – in pony racing it’s amateurs against amateurs but I was facing the pros here. I can’t put it into words, but I’m so lucky and so grateful.”

Meanwhile, an ecstatic Fergal O’Brien added: I can’t really put this into words without crying! It’s amazing to see the little girl who started out riding ponies do this and it’s unbelievable, this has been her dream and every day I’m watching her fulfilling it.

“Tonight has been unbelievable. For her to come up her on her first ride on a horse that wasn’t very fancied and to give him the ride she did – to stay cool and collected – was fantastic and I’m just unbelievably proud of her.”

The action got underway with the five-furlong VL Aesthetics Honours Lesley Maxwell Handicap which went the way of 4-1 chance Yukon Mission.

A four year old daughter of Kodiac, Yukon Mission was winning at the 19th attempt but has more than paid her way by finishing second or third on 15 occasions.

Josephine Gordon delivered her challenge perfectly up the rail on the John Quinn-trained filly to take the VL Aesthetics Honours Lesley Maxwell Handicap by three-quarters of a length from 7-2 favourite Wade’s Magic.

Gordon said: “She has been very unlucky on her last few runs and has been second or third and always in the placings

“She is a decent filly and I thought we got the run of the race really. The stiff track helped and she is probably better at six furlongs but she has done it nicely. John Quinn’s horses are in good order and he did she would run a big race.

“I’ve only been here once, three years ago. It is always busy and good for the girls.”

Pearson has a tonne in her sights

Leading apprentice Laura Pearson hit an important career milestone when riding her 50th winner at Newcastle on 29th July and she wasted little time picking up winner number 51, when handing a well-timed ride to the Amanda Perratt-trained Chinese Spirit.

The seven year old came fast and late to justify 7-4 favouritism and Pearson was pleased to get back in the winners’ enclosure. She said: “It panned out perfectly for us, they set a good gallop which he needed and I was told he can be a bit of a monkey so getting him to hit the front on the line is the key to him.

“It’s my first time at this evening and it’s brilliant. It gives the amateurs and the girls who aren’t riding as much the opportunity to ride a bit more and it’s just a good thing so hopefully it can continue.

“That’s 51 winners for me now – it’s been a really exciting year so far and hopefully it can continue.”

It’s proven to be something of a breakthrough campaign so far for Joanna Mason and the jockey picked up the 23rd winner of her fine season with a power-packed ride on the Linda Stubbs-trained Old News (7-2).

The four year old found plenty to see off the late challenge of Gemma Tutty and Tangled in the closing stages and speaking after the race, Mason revealed that she was pleased to pick up a winner on a night she has supported for many years.

She said: “I’m thrilled. I was probably a bit out-paced at times but they’ve come to me at the bottom of the straight and he’s got that nice turn of foot.

“Gemma has come to me (on Tanlged) but he’s battled well and I think I got back up. It means everything because he’s been second in two photo finishes and it means a lot to the yard.

“This night is brilliant, it gets all the girls out and unlike at normal meetings there’s plenty of opportunities for the amateur riders, so it’s brilliant and long may it continue.”

The Tuttys strike at Carlisle once again

It seems as though Karen Tutty and her daughter Gemma have a winner at every Flat meeting held at Carlisle and the pair enhanced their fine record at the track with Strawman (5-1), who was a game winner of the VL Aesthetics Honours Ann Ford Handicap.

Tutty showed plenty of patience on board the four year old, who took quite a while to get his affairs in order but stayed on well to prevail by a short head.

And the winning rider was delighted to complete a double on Strawman. She said: “He’s been really well at home and settled better today – maybe he was a bit fresh last time. He didn’t feel as smooth today and he had to work hard for it in a much better race today but he stuck his head down when it mattered and I was pleased with his attitude.

“Last time it happened so easily for him that you never really know how genuine they’ll be when push comes to shove but I was happy with that.

“It’s always been a well-supported night and all the girls genuinely love coming here. It’s just nice that it’s been that popular that they’ve managed to make it an annual fixture and it doesn’t look like it’s going anywhere anytime soon.”