NEXT weekend’s Armstrong Aggregates Temple Stakes at Haydock Park could be the next stop for local wonder horse Mabs Cross. 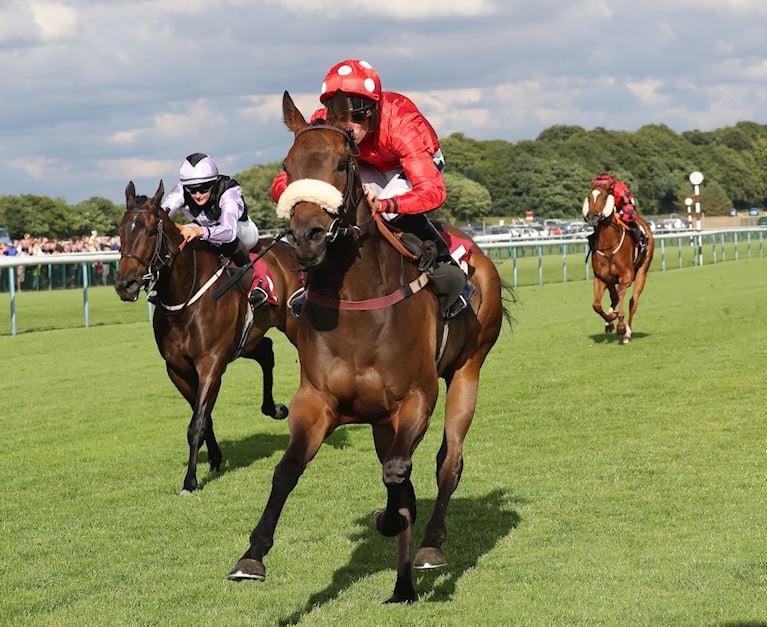 The brilliant five-year-old was crowned champion European sprinter after powering her way to glory in the Prix de I’ Abbeye at Longchamp.

Weeks earlier she was beaten by a nose in the prestigious Nunthorpe Stakes at York.

But the good times have kept rolling for Mabs Cross this year. The jet-heeled sprinter brushed aside a seven-pound penalty to defend her Palace House Stakes crown at Newmarket on 2,000 Guineas Day.

And her owners, David and Emma Armstrong who bred Mabs Cross at Coppull’s Highfield Farm, would love to see their pride and joy claim the Temple Stakes crown - the race they sponsor every year at Haydock Park.

“Mabs Cross’ win at Newmarket a fortnight ago was an extraordinary effort,” said co-owner David Armstrong.

“We’ve always had an iron belief in her.

“She has such a big heart and never stops trying.

“I definitely thought there would be more improvement in her this season - and she proved that in the Palace House Stakes.”

He added: “Breeding horses is my passion in life and to have a horse like her is a dream.

“Haydock Park is my local track, the course I first went to watch racing with a friend, and I caught the racing bug.

“I enjoy going there and it would be lovely to see Mabs Cross race there again.”

The Armstrong’s have already bred July Cup winner Mayson, who raced in their colours, as did Prix Maurice De Gheest winner Garswood.

The Temple Stakes is set to attract a stellar line-up with speedball Kachy, Nunthorpe victor Alpha Delphini and Battaash all in the reckoning for the Group Two five-furlongs dash.

Battaash recovered from a slow start twelve months ago to get up and deny Aidan O’Brien’s Washington DC with Kachy in third and Mabs Cross in fourth.

Charlie Hills, trainer of Battaash, said: “Last year, although he won a couple of nice Group 2 races, the Temple Stakes and King George Quatar Stakes at Goodwood, we were never really happy with the way he looked.

“But this season year he looks fantastic, his work’s been good and he’s a picture of health.

“He’ll go back to Haydock next week, then Ascot.”