The famous two-mile contest is the richest on an outstanding eight-race mix of Jump and Flat racing at Haydock Park that offers £270,500 in prize money.

Warwickshire-based Olly Murphy, who commenced training half-way through 2017 and has made a tremendous start to his career, runs Fiesole (David England, 11st), who was very impressive when winning the Sussex Champion Handicap Hurdle at Plumpton by seven lengths on April 21. The seven-year-old joined Murphy this season, having previously been trained in Ireland.

“He won nicely at Plumpton and has a real good each-way chance up at Haydock.

“I am just hoping that they don’t get too much rain as the faster the ground, the better for him in terms of his chances in the race.

“Fiesole has gone up 12lb (in the ratings) and has won a nice pot now, but it would be nice to think there is more improvement to come and that he is capable of another big performance.”

Fellow Warwickshire-based trainer Dan Skelton has already saddled four winners in the 2019/20 campaign, having sent out an amazing 205 winners last season. He is represented tomorrow by Sofia’s Rock (Harry Skelton, 11st 4lb), a winner of two of his three starts in novice company, who is tackling a handicap for the first time.

Evan Williams is seeking an unprecedented fifth victory in the Pertemps Network Swinton Handicap Hurdle, having sent out the winner four times in the last six runnings.

The Vale Of Glamorgan handler is represented by his impressive 2017 winner John Constable (Adam Wedge, 10st 10lb), who has dropped 24lb in the handicap to a rating of 132 since finishing seventh behind stablemate Silver Streak in this race 12 months ago.

John Constable, now an eight-year-old, has not raced since coming seventh in a handicap hurdle at Cheltenham on January 26, after which he underwent a wind operation.

Williams explained today: “John Constable seems all right, but he was badly out of form when we last saw him.

“I tried to make him into a chaser in the autumn [finished fifth at Southwell and third at Worcester] and I don’t think it did him any favours to be honest - he was not himself after that.

“We have given him a wind operation and we will just have to see if that helps him or not.”

Asked about possibly becoming the winning-most trainer in the Pertemps Network Swinton Handicap Hurdle (he is currently tied with Martin Pipe on four winners), Williams added: “I think we are a long way away from that!

“The horse I wanted to get in was Court Royale, but he just missed the cut unfortunately.

“I can’t tell you anything about John Constable other than that he is fresh after a good holiday, but he needs to recapture a lot before you would be confident of breaking any records.” 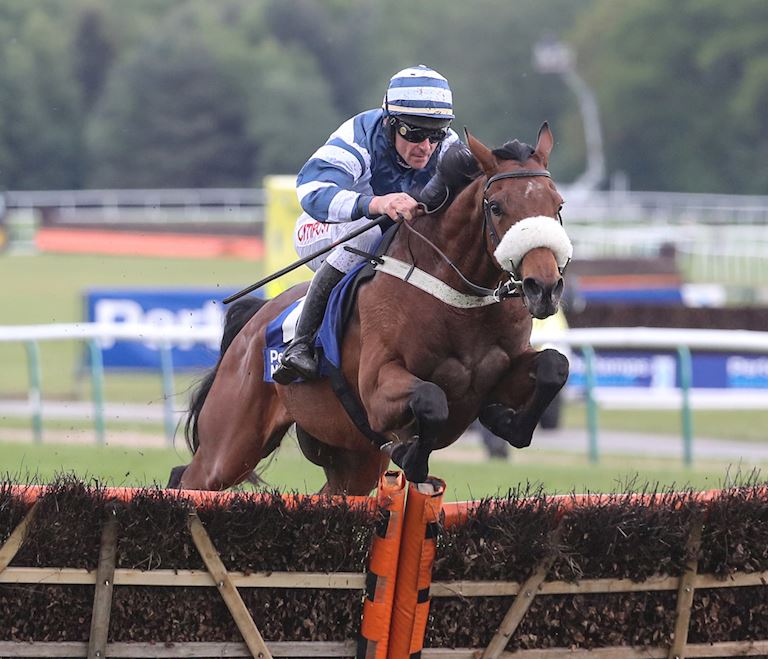 Heading the weights is Le Patriote (Dr Richard Newland/Sam Twiston-Davies, 11st 12lb). The seven-year-old returned from a 165-day break to win a competitive handicap hurdle at Cheltenham on April 17, having landed the Scottish Champion Hurdle Trial Handicap Hurdle at Ayr in November.

The Pertemps Network Swinton Handicap Hurdle is one of the few races in the calendar to have eluded 11-time champion Jump trainer Paul Nicholls, who this year relies on progressive four-year-old Christopher Wood (Harry Cobden, 11st 2lb), who won his first two starts over hurdles before finishing third in the G1 Doom Bar Anniversary 4-Y-O Juvenile Hurdle at the Randox Heath Grand National Festival at Aintree on April 4.

Nietzsche (Brian Ellison/Danny McMenamin (7), 10st 13lb) was successful in the G3 Unibet Greatwood Handicap Hurdle at Cheltenham in November and showed signs of a return to form when on the Flat at Doncaster on April 27, while Champagne City (Tom George/Jonathan Burke, 11st 3lb) put together some good placed efforts in competitive company last season.

Also set to line up are Flying Tiger (Nick Williams/Chester Williams (5), 10st 9lb), winless since taking the Fred Winter Juvenile Handicap Hurdle at the 2017 Cheltenham Festival, and Project Bluebook (John Quinn/Jonjo O’Neill Jr (3)), who has not troubled the judge since scoring in G2 company at Fairyhouse in April, 2017.

The field is completed by Kingofthecotswolds (Nigel Twiston-Davies/Jordan Nailor (7), 10st 8lb) and Thistimenextyear (Richard Spencer/Darragh O’Keeffe (7), 10st 5lb), who was runner-up in the Pinsent Masons Handicap Hurdle at Aintree on Grand National Day.

The Flat highlight tomorrow is the £37,000 Listed Pertemps Network Spring Trophy Stakes (4.20pm, eight runners) over seven furlongs. The field is head by the 115-rated Suedois (David O’Meara/David Nolan), who captured the G1 Shadwell Turf Mile at Keeneland, USA, in 2017.

Light showers are forecast today, while tomorrow is predicted to be dry with temperatures of up to 14 degrees Celsius.

*This year sees the 41st running of the Pertemps Network Swinton Handicap Hurdle. Always a very competitive handicap hurdle, the Pertemps Network Handicap Hurdle carries prize money of £100,000 and is the joint-richest handicap hurdle staged at Haydock Park. Previous winners have gone on to be leading performers at the very highest level. The safety limit is currently 17 runners.

*The 1979 race went to the Bob Turnell-trained Beacon Light, who earlier in 1979 finished third to Monksfield and Sea Pigeon in the Champion Hurdle at the Cheltenham Festival.

*Rimell gained his second victory in the space of four years when Gaye Chance entered the winner’s enclosure in 1981. Three years later, after Mercy Rimell had taken over the reins from her late husband, Gaye Chance won at the Cheltenham Festival, taking the Stayers’ Hurdle, while his full-brother Gaye Brief captured the 1983 Champion Hurdle.

*Past Glories (1988) was another winner to be placed in the Champion Hurdle. He was only beaten three and three-quarter lengths into third by Kribensis, despite his 150/1 starting price in the 1990 Cheltenham showpiece.

* Martin Pipe had the first of his four successes with Corporal Clinger in 1985. The master of Nicholashayne also struck with Tragic Hero (1996), Rainbow Frontier (1998) and Acambo (2006).

*In 2018, Evan Williams joined Pipe as the most successful trainer in the race’s history when saddling the winner Silver Streak, who went on to be third in the 2019 Champion Hurdle. Williams was previously successful with Barizan (2013), Ballyglasheen (2014) and John Constable (2017).

*Intersky Falcon was victorious in 2002 for trainer Jonjo O’Neill, who also won the Haydock hurdle as a jockey on the Peter Easterby-trained No Bombs in 1980. Intersky Falcon went on to win a number of top prizes including two G1 Christmas Hurdles at Kempton and also came third to Hardy Eustace in the 2004 Champion Hurdle.

*Andy Turnell is the other successful jockey to have gone on to train the winner of the race. Turnell rode Beacon Light (1979) and Secret Ballot (1982) to victory and saddled Blue Bajan (2008) to success.

*Four jockeys have ridden two winners of the contest. Three of these (Andy Turnell, David Bridgwater & Paul Moloney) are now retired, while Graham Lee has switched to the Flat.

*Macs Joy became the third and latest Irish winner in 2004, coming home two and a half lengths clear of Dancing Bay to justify favouritism. The Jessica Harrington-trained gelding went on to win the G1 Irish Champion Hurdle in 2005 and was runner-up to Brave Inca in the 2006 Champion Hurdle at Cheltenham. The two previous Irish-trained winners were Bitofabanter (1992) and She’s Our Mare (1999).

*It is a relatively poor race for favourites, with only six (15 per cent) successful in the 40 runnings to date.

*Pertemps Network has been the sponsor since 2012. Previous sponsors were Betfred, the Tote, Crowther and Merewood Homes, Swinton Insurance and Royal Doulton.

1983     abandoned due to waterlogged ground

Hosted across ten of the UK's leading racecourses it encompasses the top British racing festivals, including the QIPCO Guineas Festival at Newmarket, the Investec Derby Festival at Epsom, Royal Ascot, the Moët & Chandon Newmarket July Festival, The Qatar Goodwood Festival, the Welcome to Yorkshire Ebor Festival at York and the William Hill St Leger Festival at Doncaster.