Advertise (Martyn Meade/Frankie Dettori) is the 11/4 favourite with Betfair following a fine run of form that has seen him capture the G1 Commonwealth Cup at Royal Ascot and the G1 Prix Maurice de Gheest on his latest start at Deauville, France, on August 4. In between, he lost nothing in defeat when second to a revitalised Ten Sovereigns (Aidan O’Brien/Ryan Moore, 7/2 with Betfair) in the G1 Darley July Cup at Newmarket in July.

The Charlie Hills-trained Khaadem (Jim Crowley, 5/1) finished seventh behind Advertise at Royal Ascot, but has since marked himself down as a top-class sprinter in the making with a dominant success in the Stewards’ Cup Heritage Handicap at Goodwood on August 3. Hills nearly pulled off the same double in 2015 with Magical Memory, who was beaten three parts of a length by Twilight Son at Haydock Park.

G1 Diamond Jubilee Stakes runner-up Dream Of Dreams (Danny Tudhope) is an 8/1 chance with Betfair, as trainer Sir Michael Stoute chases a third Betfair Sprint Cup triumph, having last won the contest with Ajdal in 1987. Dream Of Dreams is aiming to put a disappointing run behind him having finished 10th in the G1 Darley July Cup. 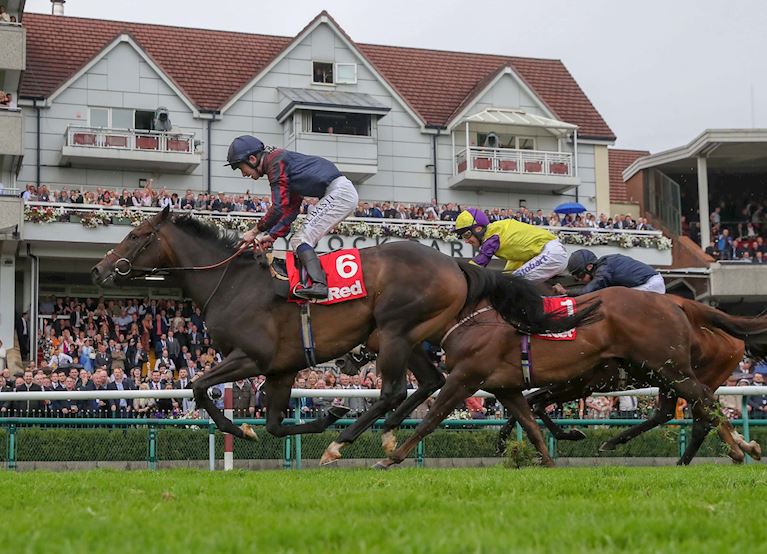 The Tin Man (James Fanshawe/Oisin Murphy, 14/1) and Brando (Kevin Ryan/Tom Eaves, 14/1), who fought out the finish to last year’s Sprint Cup, both line up again. The Tin Man would become only the second horse after Be Friendly (1966 & 1967) to win back-to-back runnings of the G1 highlight.

The Irish challenge also includes Forever In Dreams (Aidan Fogarty/Billy Lee, 33/1), who has not raced since finishing second behind Advertise at Royal Ascot. Prior to that, the daughter of 2011 Sprint Cup hero Dream Ahead landed the six-furlong Listed Cecil Frail Stakes at Haydock Park in May.

German raider Waldpfad (Dominik Moser/Andrea Atzeni, 14/1) is no stranger to success in Britain, having captured the G3 Hackwood Stakes at Newbury on July 20, a race in which Khaadem and The Tin Man finished second and seventh respectively. Waldpfad has since finished second in the G2 Goldene Peitsche at Baden-Baden on August 25.

Dominik Moser reported this morning: “Waldpfad is in good form and we have been delighted with his preparation.

“He has already started the journey over, he left this morning and will arrive in Britain this afternoon.

“We have been happy with him since his run at Baden-Baden. He came out of it very well and this has been the plan since.

“He was unlucky at Baden-Baden as he got a bump coming out of the stalls and the ground was very quick.

“He took on a talented British horse [Royal Intervention] who got first run and we were unable to make up the ground.

“I have heard that they have had rain at Haydock and soft conditions will suit him. Softer ground is a benefit and I think that will see him to good effect.

“It is a little bit of a dream to have a runner in a G1 event at Haydock. We have already won a G3 in England this year and we are looking forward to the opportunity to compete in England again.

“I think six furlongs is his ideal trip, but he stays seven furlongs. It should be a stiff six-furlong test at Haydock and that will suit Waldpfad."

The 13 runners are completed by Invincible Army (James Tate/PJ McDonald, 16/1), successful this season in the G2 Duke of York Stakes in May and the G3 Chipchase Stakes at Newcastle the following month.

Betfair spokesman, Barry Orr, commented today: “Yesterday all market indications were pointing to Ten Sovereigns being a non-runner, so he drifted out to 6/1 but with his participation now confirmed we have cut him back into 7/2 and knocked the favourite Advertise out to 11/4 from 2/1.”

Stars of the future could be on show in the £25,500 Listed Read Ryan Moore Exclusively At betfair.com Ascendant Stakes (3.00pm, eight runners) over a mile for two-year-olds. He’s A Keeper (Tom Dascombe/Richard Kingscote) proved himself over the course and distance with a four-length novice race victory on August 9. Others to note include Subjectivist (Mark Johnston/Franny Norton) and Shared Belief (Archie Watson/Danny Tudhope), both placed at this level last time out, as well as novice race scorers Tammani (William Haggas/James Doyle) and Sound Of Cannons (Brian Meehan/Oisin Murphy).

The action gets underway at 1.50pm with the £100,000 Better Odds On The Betfair Exchange Handicap (12 runners), staged over a mile and six furlongs for three-year-olds. Sir Michael Stoute landed the prize in 2018 with Mekong and the Newmarket trainer is represented by The Queen’s Calculation (Ryan Moore, 8st 12lb), a son of Gold Cup heroine Estimate who has won his last three starts. Melrose Handicap runner-up First In Line (John Gosden/Frankie Dettori, 9st 7lb) and the prolific Moon King (Ralph Beckett/Harry Bentley, 8st 11lb) also feature.

Tickets for Betfair Sprint Day and all other fixtures at Haydock Park are available to purchase online and racegoers should head to https://www.thejockeyclub.co.uk/haydock/ to purchase.

The going at Haydock Park is currently Soft, Good to Soft in places. Today is expected to be largely dry, with showers forecast for tomorrow and Saturday.

About the Betfair Sprint Cup

The Betfair Sprint Cup is the highlight of the Flat season at Haydock Park and the G1 contest over six furlongs is run for the 53rd time on Saturday, September 7, 2019.

The race regularly attracts the very best horses from across Europe and is often a major factor in deciding each year's champion sprinter.

The inaugural running was held on November 5, 1966, and fell to Be Friendly, trained in Epsom by Cyril Mitchell and owned by the BBC's "Voice of Racing" – Sir Peter O'Sullevan. Be Friendly was victorious once again in 1967 and remains the only dual victor to date. He was cruelly denied a chance to score three times by fog in 1968.

Legendary Irish trainer Vincent O'Brien sent out the first overseas-trained winner in 1972 in the shape of Abergwaun, owned by Charles St George and ridden by Lester Piggott, while in 1975 the filly Lianga, trained in France by Argentinian Angel Penna, become the first Gallic scorer, coming home in the famous blue silks of Daniel Wildenstein. Lianga was the first ever French-trained runner at Haydock Park.

The race was switched from the final day of the season to the first Saturday in September in 1979 when Double Form, trained by Fulke Johnson Houghton, was successful. Double Form became the first horse to win three of Europe's premier sprints - the King's Stand Stakes at Royal Ascot, the Prix de l'Abbaye at Longchamp, France, and the Haydock Park contest - all in the same season.

Moorestyle in 1980 was another outstanding winner - subsequently being crowned Horse of the Year by the Racegoers Club - the first sprinter to achieve this accolade.

Flying filly Habibti, trained by John Dunlop and ridden by Willie Carson, was another impressive winner in 1983 - also being named as Horse of the Year.

Carson was also successful on Boldboy (1977) and Dayjur (1990), making him one of the jockeys who have enjoyed three successes - the others are Lester Piggott, Bruce Raymond and the late Pat Eddery.

A unique feature of the contest had been that it was held on a round course. However, a straight six-furlong course was opened at Haydock Park in 1986 and this has been used ever since.

Dowsing, owned by Khalid Abdulla, trained by Jeremy Tree and ridden by Pat Eddery, became the first winner of the race when it was upgraded to G1 status in 1988. A year later the same owner, trainer and jockey teamed up for success again with Danehill, who went on to terrific success as a stallion both in Europe and Australasia.

Dayjur was another outstanding winner in 1990 and went on to be crowned European Champion Sprinter that season. After his Haydock Park success, he was unlucky to be narrowly defeated in the Breeders' Cup Sprint on dirt at Belmont Park, USA, after jumping a shadow in the closing stages.

Polar Falcon gave French trainer John Hammond the first of his three successes in 1991 - Hammond enjoyed further victories with Cherokee Rose in 1995 and Nuclear Debate in 2001.

Sheikh Albadou in 1992 improved on Dayjur's effort when he landed both the Sprint and the Breeders' Cup Sprint at Churchill Downs.

Four trainers have enjoyed multiple success in the prestigious contest this century.

The late John Dunlop scored with Lavinia Fontana (1995) and Invincible Spirit (2002), Yorkshireman Tim Easterby triumphed with Pipalong (2000) and Somnus (2003), while Roger Charlton has also enjoyed two victories with Tamarisk (1998) and Tante Rose (2004). Henry Candy saddled Markab (2010) and Twilight Son (2015) to success, while James Fanshawe is the most recent trainer to have saddled two winners, scoring with Society Rock (2012) and The Tin Man (2018).

Dunlop, who passed away in 2018, won a total of four Sprint Cups - the Arundel handler's other winners were Runnett (1981) and Habibti - and he is the race's most successful trainer.

Sheikh Mohammed is the most successful owner in the Betfair Sprint, having seen his colours carried to success by Ajdal (1987), Wolfhound (1993), Cherokee Rose (1995) and Goodricke (2005). To that list could also be added Diktat (1999) and Harry Angel (2017), who won in the royal blue silks of Sheikh Mohammed’s Godolphin.