Bryony Frost, who landed a sponsorship deal with Jockey Club Racecourses ahead of tomorrow’s Betfair Chase, has told her rivals: ‘Write off Frodon at your peril.’

Frodon conjured up one of the most thrilling moments of the 2018-19 jumps campaign when claiming the Ryanair Chase under Frost at Cheltenham. 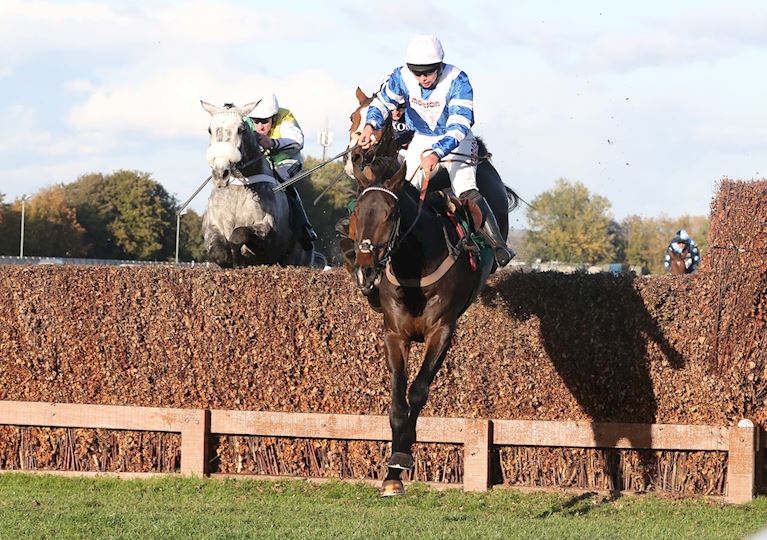 Bryony said: “Frodon is in good heart and, if he jumps as well as we know he can, and everything goes for him, I wouldn’t swap him for any other horse in the Betfair Chase.

“You get the top horses coming to Haydock Park and competing – they’re big guns – but it’s exciting as a jockey to go into these races with a horse like Frodon.

“Haydock Park is a renowned track for its jumping and I’m looking forward to getting out there.”

Frost is making headlines every time she rides these days and her big race wins are stacking up faster than Paul Nicholls’ silverware haul.

The Jockey Club deal means she will wear the logo of Britain’s largest racecourse operator on her breeches for the first time in tomorrow’s Betfair duel.

And a special behind the scenes film will chart her heroic deeds on the track for the next year.

“I know that I’m incredibly lucky to do what I do for a living, so it’s important to me to be able to let people into my world too.

“Horseracing is a sport but it’s also a way of life.”

Frost, who is based with champion Jumps Trainer Nicholls in Somerset, added: “I live for riding horses and the Jockey Club is just as passionate about getting that connection across as I am.”

Jockey Club Racecourses Chief Executive Paul Fisher said: “Bryony Frost is one of the most popular jockeys in recent history.

“There are not many who are able to perform to the level she does, then immediately articulate what she and her horse have achieved in a race and explain what it means to her.”

All eyes will be on Bristol De Mai tomorrow when Nigel Twiston-Davies’ champion will attempt to complete a hat-trick of wins in the Betfair Chase.