Five runners will to go to post for the 16th running of the G1 Betfair Chase at Haydock Park on Saturday, 21 November.

Heading the 2020 field for the extended three miles and one-furlong contest is last year’s winner Lostintranslation (Colin Tizzard/Robbie Power). The eight-year-old powered to length and a half success over Bristol de Mai (Nigel Twiston-Davies/Daryl Jacob), the winner in 2017 and 2018, 12 months ago. 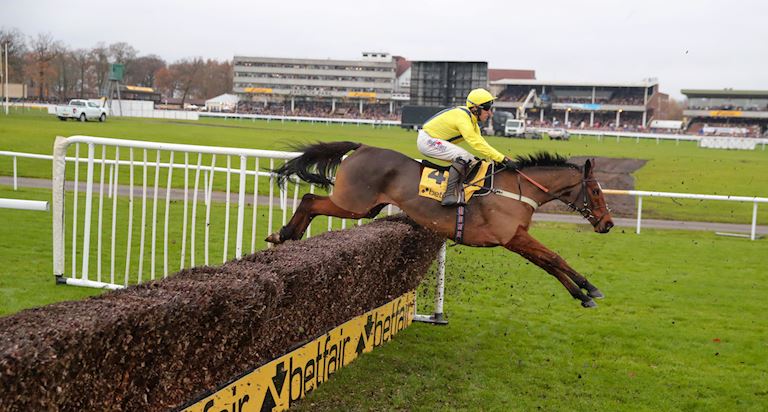 Lostintranslation made two subsequent appearances after his Haydock Park success – he disappointed when pulling up in the G1 King George VI Chase at Kempton Park on Boxing Day but ended the season strongly with a staying-on third in the G1 Magners Cheltenham Gold Cup.

Trainer Colin Tizzard said: “Lostintranslation is in great form and we are looking forward to getting his season started.

“He went for an away day and we were really happy with the way he galloped. He also schooled last Wednesday morning and I was delighted with what I saw.

“Lostintranslation is of course the defending champion and we are looking forward to going back and hopefully winning the race again.

“I really couldn’t be happier with him at home. That racecourse gallop will have done him the world of good and the Betfair Chase can’t come soon enough.

“He is a lovely horse to have in the yard and we are looking forward to another good season with him."

Paul Nicholls is the most successful trainer in the history of the Betfair Chase, with six successes. He is represented this year by Clan des Obeaux (Sam Twiston-Davies), who has won the last two runnings of the G1 King George VI Chase at Kempton Park. He ran in the Betfair Chase two years ago, finishing fourth.

Also going to post is five-time G1 winner Bellshill (Sandy Thomson/Ryan Mania), who won the G1 Irish Gold Cup in 2019 for his former trainer Willie Mullins. He will be making his first appearance for his new handler, Scottish-based Sandy Thomson on Saturday.

Thomson, who is based at Lambden, Berwickshire, said today: “Bellshill is in fine form and we are looking forward to running in the Betfair Chase.

“He has been in great form since he came to me and enjoyed a racecourse gallop at Carlisle recently.

“We were delighted with that and he would not be going to Haydock unless we thought he was going to do himself justice.

“We’ll find out how he can get on against the likes of Lostintranslation, Bristol de Mai and Clan des Obeaux.

“These good horses need to start somewhere and it is great to have a horse like him in the yard."

Completing the line-up is Keeper Hill (Warren Greatrex/Adrian Heskin), winner of a graduation chase on Betfair Chase Day in 2019 and fourth on his seasonal return behind Cyrname in the G2 Charlie Hall Chase at Wetherby last month.

Betfair Spokesman Barry Orr commented today: “All five have stood their ground and it is no surprise to see last year’s winner Lostintranslation holding firm at the head of the betting at 5/4. He the only horse to have attracted strong ante-post support and it is conceivable that he could go off odds-on come Saturday.

“The flip side of a strong market check for Lostintranslation is the relatively weakness of dual Betfair Chase winner Bristol de Mai, who is out to 15/8. Stable confidence is an obvious concern for punters there.

“Clan des Obeaux has been nibbled at in the betting, 5/2 from 3/1, and appears to be the one horse which punters are siding with to upset the favourite.”

The supporting action on Saturday’s seven-race card, which is sponsored entirely by Betfair, is headed by the G3 Betfair Exchange Stayers' Handicap Hurdle (2.25pm, 3m 58y), for which a maximum field of 17 lines up.

Jointly-heading the market at 5/1 with Betfair are Imperial Alcazar (Fergal O’Brien/Paddy Brennan), a very promising novice last season but not seen out since January, and Relegate (Colm Murphy/Robbie Power), winner of the G1 Weatherbys Champion Bumper at Cheltenham in 2018 when trained by Willie Mullins and a promising fourth on her first start of the current campaign in a G2 contest at Navan on 8 November.

Barry Orr added: “The Betfair Stayers’ Hurdle is shaping up to the one of the races of the weekend with only half a point splitting the first three in the betting. Imperial Alcazar and Relegate head the betting but recent Troytown winner, The Jam Man, reverting to hurdles is sure to be a popular choice for an in-form stable.”

The forecast is for mild, wet and breezy conditions, with around five millimetres of rain set to fall daily and maximum temperatures of 14 degrees Celsius.