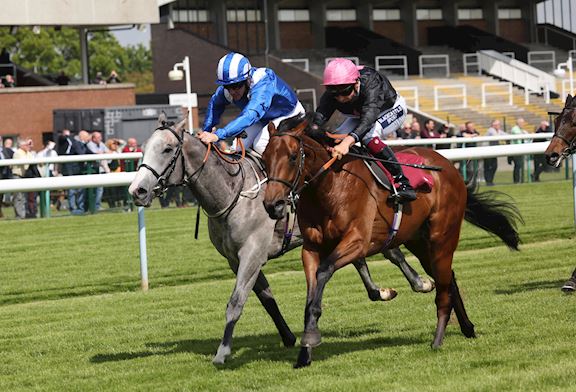 It proved to be a lovely day under the sun on Merseyside on Thursday 27th May and those in attendance at Haydock Park were treated to an interesting seven-race card.

There were some exciting finishes on the day and we sent Nick Seddon to speak to the winning connections.

Olympic Theatre is on a roll

The opening race was the Leigh Handicap over a mile and three and a half furlongs and the five-strong contest contained a couple of last time out winners in the Ed Dunlop-trained Amazing Red and Michael Bell’s Olympic Theatre.

The latter had taken the step up to this trip in his stride when opening his account at the ninth attempt at Windsor earlier this month and he certainly seems to have clicked into place, with the son of Mayson notching up a quick-fire double here to justify 2-1 favouritism.

He seems to be going the right way and winning jockey Dylan Hogan is hopeful that he hasn’t stopped improving just yet. He said: “It was a good performance. He travelled through the race really well and when he gets in front he can have a bit of a look around but he did it well and hopefully there’s some more improvement in him yet.

Hansen notches up a quick-fire double

It proved to be a productive afternoon of work for jockey Thore Hammer Hansen, who notched up a quick-fire 59-1 double in the second and third races of the day.

The first of those came on board the Richard Hannon-trained Tacarib Bay (14-1) in the British Stallion Studs EBF Maiden Stakes, who showed plenty of professionalism to make a winning debut.

And Hansen feels that the son of Night Of Thunder could have a nice future. He said: “He’s a very professional type. He travelled away and hit a flat spot about three out. He was very green once I set into him but he’s a lovely horse with loads of scope, he’d appreciate further in time and he’s got a nice future.”

Hansen then followed up that success with victory on board Raging (3-1) in the Seven Sisters Novice Stakes, which was also for Hannon. The Holy Roman Emperor colt showed a good turn of foot to deny the 4-9 favourite Jadhlaan and Hansen is hopeful that he can built on that yet.

He said: “He’s probably one who wants six furlongs in time and he needed a bit of encouragement four and a half out but he jumped back on the bridle. Jim (Crowley) kicked clear by a couple of lengths but I always felt as though I was going to stay on and to be fair he rallied home. He just hung left under pressure but he’ll grow out of that. It’s a good day for me!”

Mecca is on the right path

One of the quirkier race names at Haydock Park during the season is certainly the George Formby Birthday Handicap, but Formby is something of a cultural icon in these parts due to being Wigan-born and it looked like we saw an above average winner in the form of the Michael Dods-trained Havagomecca (5-2 favourite).

The three year old has been in good heart so far this term, winning on return at Newcastle in April, and she was well supported in the betting here when sweeping to the front inside the final furlong under Connor Beasley.

The daughter of Havana Gold seems to be going the right way and Beasley is hopeful that there’s more improvement in her yet. He said: “She travelled very well through the race and she’s a nice filly going forward.

“It was probably softer than ideal last time but here today the drying ground suited and she’s coped with it well. I couldn’t fault her and she did it nicely, she’s a filly on the up and hopefully we can have a good campaign with her.”

Floyd makes the trip over worthwhile

The presence of the Irish-trained Pretty Boy Floyd certainly drew an eye or two in the Lowton Handicap and he started an 11-10 favourite for the five furlong contest after finishing a fine second in a competitive race at the Curragh last week.

The six year old was due to go up 7lb for that effort, meaning a quick turnaround made plenty of sense for the son of Footstepsinthesand, but making a 534-mile round trip from Sarah Dowson’s base in Northern Ireland is certainly no mean feat in the middle of a pandemic.

With former champion jockey Jim Crowley booked, Pretty Boy Floyd travelled well into the race and duly sealed a one and three quarter length success to seal a successful raid over the Irish Sea.

And the winning jockey was pleased with what he saw. He said: “He ran very well last time and was due to go up. I’d never ridden him before and he was a little bit workmanlike but he won well in the end and the long journey has paid off for him.”

Bringsty is going the right way

It may pay to keep an eye on the David Simcock-trained Bringsty, who was a taking winner of the Edge Green Novice Stakes.

The more experienced Lexington Knight was a particularly warm order in the betting after a string of good efforts, but the 4-9 favourite was having to work hard from a long way out and the eye was very quickly drawn to Bringsty.

The son of Muhaarar (4-1) breezed into the race, to the point that Callum Shepherd was checking for dangers at the three furlong pole and although Lexington Knight stayed on strongly in the closing stages, the ship had already sailed.

And Shepherd feels that there could be more to come from him yet. He said: “He relaxed very well with the first time hood and at times he was on and off the bridle, which might sound strange because he won so easily. I managed to get up to the two horses in front of me and I had a look round and I was surprised to see the favourite a fair way behind but he looked like he was going to run on so I had to let him down and he’s gone through the line well. It happens in the hood that you don’t want to be in front for too long and that was in my mind and he’s a progressive horse and he should make a mark after this.”