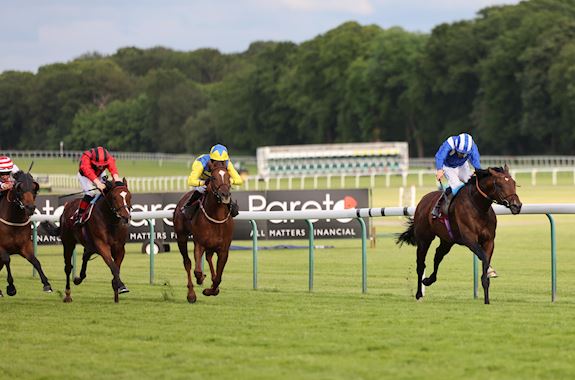 FIVE THINGS WE LEARNED ON A POIGNANT NIGHT AT HAYDOCK PARK

Haydock Park welcomed back owners and racegoers for another seven race card on Thursday evening, and much like the action 24 hours earlier it provided plenty of talking points.

Not only did one local trainer finish up with an extraordinary 544-1 treble, but there was a poignant success for Her Majesty the Queen.

POIGNANT ROYAL VICTORY ON WHAT WOULD HAVE BEEN A LANDMARK BIRTHDAY

The purple, scarlet and gold colours of Her Majesty The Queen are almost certainly the most famous in racing and they were carried to victory in emotional circumstances in the penultimate contest, the Windle Handicap, by the William Haggas-trained Wink Of An Eye.

The three year old was a strongly supported 4-6 favourite after shaping well in his two starts so far this campaign and there was never a moment’s doubt for the son of Dubawi, who cruised into contention and opened his account at the sixth attempt with a comfortable two and three quarter length success.

It provided the Queen with a poignant winner on what would have been the Duke of Edinburgh’s 100th birthday and it was one that Tudhope was honoured to provide.

He said: “You always feel honoured to ride for Her Majesty and to win for her on what would have been the Duke of Edinburgh’s 100th birthday is especially poignant.

“The Queen is a fantastic supporter of horseracing and to wear the royal silks is always very special - it’s great to get another winner for her.”

While there was no doubt about the most significant winner of the evening for reasons off the track, there was none more notable on it than Sam Maximus.

Tom Dascombe’s colt showed plenty of plenty of professionalism to make a winning debut in the Broad Oak Novice Stakes after being backed into a starting price of 10-1 from as big as 22-1 in the morning.

He showed plenty of professionalism to hold off the sustained challenge of the 11-8 favourite King Of Gold in a photo finish.

Next stop now could be the Moet & Chandon July Festival at Newmarket and, speaking after the race, Dascombe said: “We’ve liked him and if our horses win first time out they’re usually pretty good.

“Things just haven’t evolved fast enough for him for Royal Ascot but you’d have to think that maybe we’ve got a potential July Stakes horse there.”

DASCOMBE IN LOVE WITH HIS HAPPY HAYDOCK HUNTING GROUND

Tom Dascombe was grinning like the proverbial cat from Cheshire (where the trainer is based) after celebrating a sensational 544-1 treble on the night.

Both Devious Angel and Fools Rush In joined Sam Maximus in the winners’ enclosure and speaking after Fools Rush In’s victory in the finale - the Watch Irish Racing On Racing TV Handicap - Dascombe could barely contain his excitement or his love for his local track.

He said: “I just adore Haydock and luckily for me so do my horses. It’s just such a great place and we’re just so lucky to have a great racecourse on our doorstep.

“Fools Rush In is just a tough, honest and genuine individual. He’s given his best and he does every time – and the only thing I’m struggling with is why I couldn’t win with him for the first three runs of his life! But he’s a lovely horse.”

When asked about Devious Angel’s success in the racingtv.com EBF Restricted Novice Stakes, he added: “I’m thrilled. This filly really epitomises what racing is for us, which is a good day out for a relatively cheaply-priced horse that’s won two out of five and is just genuine and does her best.”

STOTT LIKES WHAT HE SEES FROM IMPRESSIVE THIBAAN

When Thibaan finished a close second at Newcastle last month it was always going to be a case of when, not if, he would go one better.

As it turns out his supporters weren’t waiting very long and his victory in the Lyme Wood Handicap over a mile was impressive for the Sir Michael Stoute team.

The four year old was raised 5lbs by the handicapper for his last run but that didn’t seem to bother him as he built up a comfortable lead before holding off the attentions of the Tim Easterby-trained Poet’s Dawn late on.

That win means it’s now two victories from nine starts for the lightly-raced son of War Front and winning jockey Kevin Stott certainly liked what he saw. He said: “He only just got caught over a mile at Newcastle, so Michael said to keep it quite simple.

“He was a little bit keen but he’s hit the line good and loved the ground, so I couldn’t fault him. He’s a nice horse and I’ll let his connections decide where next.”

SPEEDSTER CANYON HAS A BALL OUT IN FRONT

Ed Walker’s Tenaya Canyon was able to return to winning ways with a front-running success in the second race on the card, the Join Racing TV Now Handicap over five furlongs.

The three year old had endured a couple of rather luckless outings on her two most recent outings on the all-weather, but she benefited from more pressing tactics here and winning jockey Ed Greatrex felt that there could be plenty more to come from the filly now that she’s heading the right way.

He said: “She’s a progressive filly now that she’s got the hang of it. We came to the conclusion that she didn’t really like being hassled and she’s quite claustrophobic, so we went out on our own and stepped back in trip, which was perfect.

“She’s got loads of speed and she’s a filly to look forward to.”