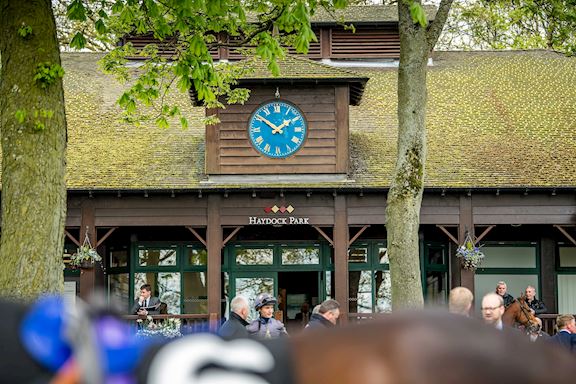 The 10 year old was an excellent second behind Royal Pagaille in last month’s Peter Marsh Handicap Chase over four furlongs shorter, going down by half a length in the closing stages.

Sam Brown was third in the Grade Two Many Clouds Chase at Aintree prior to that and his trainer is hopeful that he can pick up a deserved success in a valuable race like this after a string of solid performances.

He said: “He’s come out of that run well and we’ve done very little with him. It’s not been often that we’ve had him looking and feeling as well as he has been this season, so hopefully he’ll hold good for Saturday.

“I was really gutted not to win last time as was Aidan (Coleman), because the prep was really good and everything went right. We just bumped into a good horse in Royal Pagaille and it was nice to see him run well again at Newbury last week.”

Sam Brown was handed a weight of 10st 6lbs for the Randox Grand National itself – which guarantees him a run – and Honeyball sees no reason why he wouldn’t take to the race in April.

He said: “He’s a good candidate for the race and has a nice weight. We’re guaranteed a run and we can see now if he gets the kind of ground he wants.

“There’d be a window of ground he’d be effective on and he seems to enjoy his jumping. He’s very economic and sensible with his jumping, which would be good around Aintree.

“I suspect the stamina is there and you’d expect him to be in the mix on Saturday. If he can run well, you’d be going to Aintree with plenty of confidence.”

The 11-strong field on Saturday is an excellent one and includes the 2020 Welsh Grand National winner Secret Reprieve, who just missed out on a run in the Aintree National last April as a reserve.

Evan Williams’ charge returned with a solid effort to finish fifth in the same race at Chepstow in December and his trainer is hopeful of a good run at the weekend. He said: “We’re all grand and it probably was a good run a Chepstow considering how soft the ground was and the demands that race places on horses.

“It’s a great race on Saturday and there’s very strong competition. It’ll be a real test on the ground and very tough. He’s got a good racing weight and that’s where we’re going.

“I’m not sure we’ll get in (the Grand National), but we thought if we’re not in it we’ve got not chance. We entered because of Easter falling late and all of the big handicap races being so close together. If it’s ever going to cut up, it could be this year.”

Several runners in the race have an excellent record at Haydock Park, including the Dan Skelton-trained Blaklion, who finished best of the British-trained runners when sixth in last year’s Randox Grand National and has won two staying chases at Haydock Park already this season.

The latest of those came in similarly testing conditions in The Last Fling Chase over course and distance in December and his owner Darren Yates has been delighted with what he’s seen this term from the 13 year old.

He said: “We got to the National as number 40 and he ran a blinder to finish sixth. If it wasn’t for Rachael Blackmore I’d think he’d have got a bit more credit as he was the first British runner home and he was a 12 year old!

“After the National I said to Dan that if he’s still got the enthusiasm there’s no way he won’t be a better horse this season. We had a really good summer and to do what he’s done in the last two Haydock runs is pretty incredible really.”

Another horse in the race with a fantastic record at Haydock Park is the three-time Grade One Betfair Chase winner Bristol De Mai. The 11 year old will have to concede 9lbs to the field at the weekend, but it’s a task which doesn’t worry his jockey Sam Twiston-Davies too much.

He said: “It was a really good run at Lingfield last month and I suppose if you were going to invent a race for Bristol De Mai it would be a three and a half mile chase on heavy ground around Haydock.

“Obviously, the handicap part makes things a little more difficult but he seems in fantastic nick at home, his schooling is good and his work has been pleasing since Lingfield so we’ll hope for the best.

“He’s won a handicap here before (the 2017 Peter Marsh Handicap Chase) and he’s put up a big weight-carrying performance. With the size and scope of him the weight isn’t the problem, it’s the opposition and if somebody has a few pounds in hand you’re going to see it over three and a half miles. We’re really happy with him though and go there with plenty of belief.”

Twiston-Davies is stepping in for Bristol De Mai’s regular partner Daryl Jacob as he continues his return from a hip injury, though he explained that he is well aware of what the grey can do having seen him at home.

He said: “He’s a great character at home and he’s just a very likeable horse. He gets plenty of cards still now sent to the yard and it’s a pleasure to be associated with him.

“The conditions are in his favour and they’ve seen them to his best in the past and hopefully he can do it again. Not only have I finished behind him, I’ve lost my voice cheering for him when I’ve been at other meetings!

“He’s been fantastic for all of our family and for Simon (Munir) and Isaac (Souede). He’s been a pleasure for my dad to train and it’s great he goes with a great chance on Saturday.

“There’s so much in his favour this weekend that we’ll get a true picture of where we are with him. At the end of the day the opposition is always going to be decent because it’s the Grand National Trial, they put a lot of prize money on and they deserve a good field.”

Twiston-Davies is also due to ride stablemate Wholestone in the same colours on the card in the Grade Two William Hill Rendlesham Hurdle and he commented: “He’s coming back from an injury and we’re really happy with him. He’s still showing loads of his old spark and it’s a nice race to see where we’re at with him and work out where we go from there.”

Meanwhile, Clerk of the Course Kirkland Tellwright has provided a positive update on the going ahead of Saturday’s card – revealing he was hopeful that the racecourse would withstand the force of Storm Eunice. The ground at Haydock Park is currently heavy.

He said: “The main concern around this stormy weather has been the wind, which would be a problem on a raceday but shouldn’t be an issue the day before.

“I think when Saturday comes it’ll be blustery, but having walked the course a couple of times I’m pretty optimistic that we’ll get through.

“It’s very heavy at one or two fences so we might be bypassing them – I’ve taken the second fence out in the back straight as a precaution so it gives us more options.”