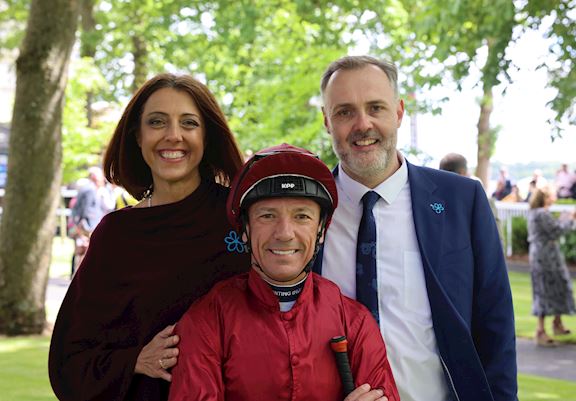 Racegoers had the opportunity to gain some key advice on the signs and symptoms of dementia at Haydock Park on Saturday (28th May), as part of The Jockey Club’s involvement in Dementia Action Week (16-22 May).

Set up by Alzheimer’s Society, the week is designed to raise awareness of dementia and encourage people to seek a diagnosis if they are experiencing symptoms.

A team of volunteers were on hand on Saturday, at one of Haydock’s biggest race days of the year, to both raise funds and awareness of the condition, which 900,000 people are living with in the United Kingdom and is the biggest killer outside of the Covid-19 pandemic.

To show their support, presenters, staff and people attending were encouraged to wear a blue ‘Forget Me Not’ badge, to raise awareness and support people affected by the condition – and the charity has been delighted by the response.

“We want people to know that consistent memory loss is not getting old, it’s getting ill. Fifty percent of people in the UK think that losing your memory is an inevitable part of ageing and we’re saying that’s not the case and you should seek support if it’s affecting your daily life.

“The whole reason we’re here at Haydock is to raise awareness about signs and symptoms. We want people to come to Alzheimer’s Society if they’re struggling with their memory - generally in the UK people leave it an average of two years before seeking a diagnosis - we want people to come forward sooner and earlier.

“Major sporting events like this can help us reach thousands more people affected by dementia. Through our pioneering Sport United Against Dementia campaign, we have partnered with leaders from across the world of professional sport to tackle dementia as a team. We’re delighted that Nevin Truesdale, The Jockey Club’s CEO, is a key part of this campaign and hope together, we can reach thousands of racegoers with an offer of support.

Dickon White, Regional Director for The Jockey Club, added: “We were delighted to welcome Kate and all of the team from Alzheimer’s Society at Haydock Park on Saturday afternoon, on their mission to raise awareness and funds for such a worthwhile cause.

“Alzheimer’s Society is an official charity partner of ours, which came about after we surveyed our own employees for suggestions, so it is very much a cause that is a particularly close to our hearts. As part of this, we took part in a Dementia Friends training session ahead of Saturday to make sure everyone was more aware of the condition.

“We’ve had the opportunity over the past few years to see close up just how vital the charity’s work is to the community and hopefully it’s a partnership which can continue for many years to come.

“Awareness is absolutely key and if just one racegoer reaches out on the back of this, the event will have been an unreserved success.”