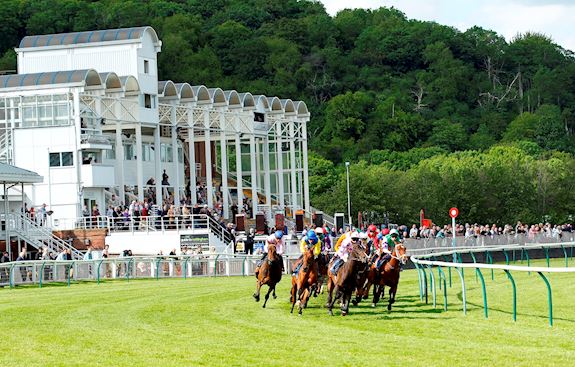 They have been racing in Nottingham for the best part of 300 years – more than a century over the furlongs at Colwick Park.

The original track was laid out around The Forest in 1689 and the sport of kings attracted thousands of punters, including members of the aristocracy. In July 1763 the race programme, which also included cock-fighting, attracted the Duke of York, the Dukes of Rutland and Kingston, the Marquis of Granby and Lords Byron, Sutton and Strange.

It came to an end in 1890 and a year later the Nottingham and Colwick Park Racecourse and Sports Company was floated on the stock market. And racing moved to the present site of nearly 300 acres at Colwick Park - formerly part of the Colwick Hall Estate.

An Edwardian postcard showing the main stand at Colwick Racecourse. It survived until 1986 when it was destroyed by fire.

It was back in 1965 that the seeds of the current set-up were sown and the future of the Racecourse secured. It was bought by Nottingham City Council and an ongoing lease agreed with Racecourse Holdings Trust (the predecessors of Jockey Club Racecourses).

Until 1996 Nottingham was a dual purpose racecourse which has regularly made sporting headlines.

In October 1933 Gordon Richards rode the first of a world record 12 consecutive winners – the remaining 11 came over the following two days at Chepstow. And in 1935, three brothers, Arthur, Sam and Harry Wragg, took the first three places in a race.

In 1971 on a horse called Ouzo in a Novices Chase, Stan Mellor became the first National Hunt Jockey to ride 1,000 winners.

Shortly before the executive decided to make the course flat only the most successful jump jockey of all time, AP McCoy put a Nottingham winner on his CV, booting home The Boiler White to land a 3 mile 3 furlong Handicap Chase for trainer Tim Thomson Jones in March 1995.

Lester Piggott on Wind from the West at Nottingham Racecourse in 1985. It was his 'last ride before retirement'. The race was won by Willie Carson on Gurteen Boy.

The last ever jump race, a Handicap Hurdle, was won by a young Apprentice jockey named Timmy Murphy who went on to win the Grand National.

In 1974 Nottingham staged the first race for men and women and then in 1981 Paul Cook made history by riding three winners at three different courses on the same day, the first coming at Nottingham.

It was in October 1985 that the Long Fellow Lester Piggott announced his retirement, riding his last winner Full Choke at Nottingham, but after a spell in prison for tax evasion, he returned to the track to ride more winners, the last coming in 1995.

Lester Piggott being led in at Nottingham Racecourse on Wind from the West.

In 1986 a mystery fire gutted the Tattersalls grandstand. Since then, two new stands have been opened. Champion jockey Jonjo O’Neill officiated in 1987 and famed mount Desert Orchid in 1992.