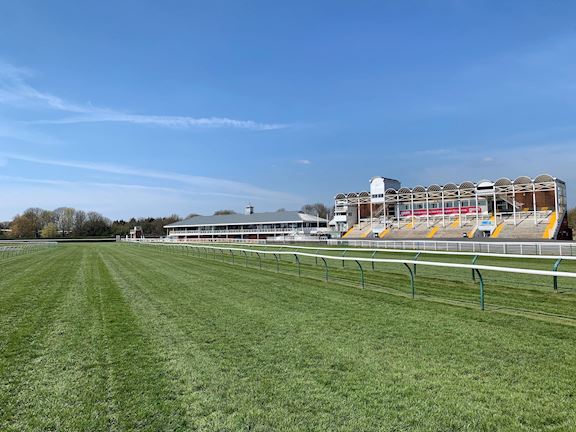 The six year old daughter of Declaration Of War, who is in foal to dual Group One winner Nathaniel, will take on a field of seven rivals in the mile and a quarter feature in what will be just one of a handful of appearances she is set to make this campaign.

After finding soft ground working against her in a Group Three at Newmarket on her final start of last season, Black Lotus had previously finished second in a Listed contest at Yarmouth, form which Wall believes a reproduction of will put her right in the shake-up.

The Newmarket-based trainer said: “Black Lotus has recently tested positive to being in foal to Nathaniel so we have only got limited time with her this year.

“Although she hasn’t won first time out before, on the whole she doesn’t run too badly fresh. As we don’t have long with her she is quite advanced in her training and on her best form she should run well.

“She had been on the go quite a long time on her last run at Newmarket while she didn’t handle the soft ground at all.

“Her second in the John Musker at Yarmouth was her best run and any reproduction of that effort tomorrow will certainly put her in the mix. It would be great to get a Listed win from her.”

George Boughey believes Apricot Moon has a good each-way chance on her stable debut with quick conditions expected to be in her favour.

The daughter of Bated Breath, who finished seventh in last year’s Irish 1000 Guineas, has joined the Newmarket handler from Andrew Oliver after being picked up at last year’s Tattersalls December Mares Sale for 50,000 Guineas.

He said: “She has had wind surgery since joining us. She has been training well but I would expect her to improve for the run. Looking at the entry stage it looked a good race to pick up some black type for her family. Her work suggests she will be a pretty versatile filly to run between a mile and a mile and a quarter.

“We could have gone to Goodwood this weekend but this looked a good spot for her. She will love the ground as she wants fast ground and a large proportion of the opposition want it soft.

“After winning her maiden she made her first start last year in the Irish 1000 Guineas and if you go through her races she was unlucky with her draws as she was drawn wide in big fields and you don’t really stand a chance.

“She has been training well and she should have an each-way chance.”

Freyja is already a winner at Listed level having claimed the James Seymour Stakes at Newmarket on her penultimate outing in October last season and though the Mark Johnston-trained four year old has a 3lb penalty to shoulder for that success, connections remain optimistic of a bold performance.

Charlie Johnston, son and assistant trainer, said: “She was treading water in the middle of last summer and she looked like she was totally exposed in the mid to high 80s. She had a little break then took off in the autumn. Whether that was down to her handling testing conditions or maturing I don’t know.

“I’m not too concerned about the ground as she has won on quicker ground before. There was the temptation to have a shot at the (Group Two) Dahlia Stakes at Newmarket on Sunday but this has been ringed in the calendar since she came back in training and it should be an ideal starting point before we roll the dice in better company.

“She has a 3lb penalty for that Listed win but even taking that into account she is clear at the ratings. She has done two pieces of work and Ben Curtis came in to sit on her 10 days ago. It looks like she has wintered very well and appears to be a bigger strong filly.”