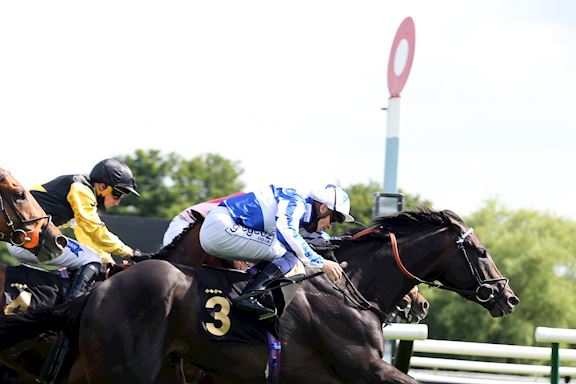 Lots to look forward to following informative afternoon at Nottingham

Nottingham’s fixture on Friday 16th July proved to be a most informative affair, with several winners on the afternoon now likely to head for valuable prizes later in the season.

Clive Cox is still to finalise his team for the Qatar Goodwood Festival later this month but it could include Wings Of War following his impressive front running success. After filling the runner-up spot on his debut at Leicester 45 days ago the son of Dark Angel went one better in taking fashion when making light of his rivals in the MansionBet Proud To Support British Racing EBF Maiden over six furlongs.

Sent straight into the lead by Hector Crouch the well supported Evens favourite barely had to come out of second gear on his first start over six furlongs before passing the post two and a half lengths clear of Sovereign Prince.

Cox, speaking away from the track, said: “That was great and I’m really pleased. He is a super colt and he ran in a good maiden first time out and that was a good step forward today stepping up to the six furlongs. I’m delighted for Sheikh Isa (owner).

“Hector comes in and rides a lot of work and he did a super job there but he knows the horse well. It was a pleasing step forward and now we can look at something better.

“I don’t see why we would go back to five having done that so nicely over six. We have been waiting for the fast ground so we will enjoy the summer with him.

“We will see how he comes out of this and take a view but Goodwood is a possibility. We will talk with Sheikh Isa and discuss a plan.”

Roger Varian will consider giving Greatgadian an entry in the bet365 Cambridgeshire at Newmarket later in the year after he opened his account for the campaign. The King Power Racing-owned Siyouni colt gained a deserved change of luck when showing a smart turn of foot dropped down to the extended mile in the MansionBet Extra Places Handicap.

Having finished in the frame on his first three starts this year the 7-4 favourite finally added to his victory at Wolverhampton last September when powering past his rivals late on before defeating Far Hope by a length and a quarter under Andrea Atzeni.

Varian speaking away from the track said: “He ran well on Derby Day and was just touched off over 10 furlongs. He is a horse we have always liked and he looked to win nicely today in what was a competitive race.

“Hopefully the horse will go on from here and I should probably put him in the Cambridgeshire but we will see where we go from here.

“I don’t know whether we will stay at this trip or go back up to 10 furlongs but he is probably quite versatile. He has been knocking on the door and his owners have been patient but he is a horse that is going to improve as he gets a bit older and stronger.”

APPLEBY LOOKING FOR ANOTHER GREY DAY AT NEWMARKET

All roads will now lead back to another outing in the MansionBet Grey Horse Handicap at Newmarket next month for Case Key who made his 60th career start a triumphant one.

Having gone 10 races since scoring at Leicester in August 2019 the Mick Appleby-trained eight year old ended a recent spell in the doldrums with a clear cut three and a quarter length success in the six-furlong MansionBet Watch And Bet Handicap.

Appleby said of the 11-1 winner: “The ground was better for him today as it was a bit quicker than last time. He was only a pound higher than his last win and Freddie (Larson) took seven pounds off so I suppose he was well in and he has done it well.

“He will probably go back for the grey horse handicap at Newmarket now and he should get in it as he needed to go up a few pounds. He has won it twice (2017 & 2019) before and it would be nice if he could win it again.”

MAN COULD POSSIBLY BE SEEN OVER FURTHER

Possible Man demonstrated the best of his battling abilities to open his account on turf in the MansionBet Best Odds Guaranteed Handicap.

After becoming embroiled in a late battle with long-time leader and 7-4 favourite State Of Bliss, the 9-4 chance stuck his neck out where it mattered most to prevail by a short head in the mile and a quarter contest.

James Savage, assistant to winning trainer Sir Michael Stoute, said: “Credit to him as the Mark Johnston horses are hard to pass. He travelled into the race really well.

“He looks progressive and is a nice home bred horse of King Power’s. He is still strengthening up so he will be around a while yet.

“He had enough speed to win over 10 furlongs there but I think he will improve when he goes up to a mile and a half.”

NOTTINGHAMSHIRE SUCCESS IN THE LAST

Cliffcake (9-1) bounced back to winning ways to give Edwinstowe-based trainer Roy Bowring his first winner at the track in 1871 days when getting up close home to take the concluding Follow @mansionbet Handicap by a head.

Lewis Edmunds, winning jockey, who was registering his first winner at the course in 1064 days, said: “He is a horse that takes a bit of knowing. The race didn’t pan out for him last time as he didn’t get the cover and he was out on the wing.

“He jumped out well today and I probably got there a touch too early today as he is a horse that needs to be produced late.”