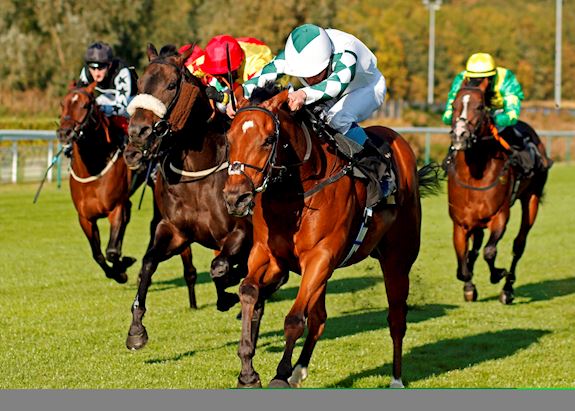 The son of Sea The Moon will attempt to secure the most valuable victory of his career in the six-furlong event by following his first success at Chepstow 20 days ago.

Vince Lombardi was given a seven pound hike in the weights for his last time victory but Leech, who operates as assistant to his wife Sophie, feels believes the two year old has plenty more progression to come.

Leech said: “He is by Sea The Moon so he is bred to stay a lot further than this. Really he should be running over a mile and he was actually purchased to be a hurdler, which we still hope he will be.

“He has shown lots of pace in his races, more so than at home. This is another big step forward but he qualified for this when he finished third at Sandown.

“He won very easily last time but it wasn’t much of a race and he just sneaked in but it’s done his confidence the world of good.

“He is up in class again but he just progressed with each run and he ran pretty well over course and distance on his third start. I think he has got a favourite’s chance. I think the series is a great initiative with great prize money for this level of racing.”

The Jockey Club Grassroots Flat Series is an initiative aimed at offering enhanced prize money to horses who tend to do their racing at a notch or two below Group or Listed level. It consists of four divisions - Sprint, Middle Distance, Stayers and Nursery – for which there were qualifiers across Jockey Club Racecourses throughout the summer. The initiative culminates with Grassroots Finals Day at Nottingham tomorrow, when there is a prize fund of £70,000 on offer across the four races.

Newmarket trainer James Ferguson believes course and distance scorer Aristobulus can leave his defeat at York behind and bounce back to winning ways if conditions are in his favour.

Ferguson said: “I’d like it to rain a bit as the horse likes soft ground. The horse has had a bit of a break since we ran him back quick at York.

“You can put a line through that run as the ground was too quick and we ran him too soon after the race before.

“He is in great nick and if he runs similar to how he ran at Nottingham before he will be competitive. The track suits him and if there is a bit of dig in the ground he will be back to best.

Meanwhile Grant Tuer feels the track and trip should suit Lezardrieux, who will bid to follow up wins at Catterick and Haydock Park by completing a hat-trick of victories for the campaign in The Jockey Club Grassroots Series Final Sprint Handicap over six furlongs.

Tuer said: “He should go alright even though he has gone up four pounds for his Haydock Park win.

“A straight six furlongs at Nottingham should suit him just as well and he won’t mind a little bit of cut in the ground but it wouldn’t be ideal if it turns really soft. He is a great little horse that wears his heart on his sleeve and tries hard. I expect him to run pretty well.

“We claimed seven off him last time but we are only claiming five this time so effectively he is six pounds higher and you have to take that into effect and that may be his ceiling but sprinters on a roll tend to keep going.

“He took a bit of time to come to hand this year and a few things went wrong but it has all come together on his last couple of runs.

Prince Of Bel Lir has failed to score in four starts since making a triumphant return over course and distance in April, but his trainer Joseph Parr is hopeful the Prince Of Lir gelding can get his head back in front under James Doyle.

Parr said: “He has always been a good horse but I don’t think he has fulfilled his potential yet as I still think he is better than his mark.

“We have run on ground that turned out to be too quick once at York and then last time at Haydock when it was like a road so you can forget that run. He needs give in the ground.

“We hope if he gets his ground he should have a good chance. We have James Doyle on board who I think is one of the best in the weighing room.”

Classic-winning rider Tom Marquand expects the return to six furlongs to prove no problem to the Amy Murphy-trained Ehrmann, who he steered to glory at Pontefract in July.

He said: “It was a funny race the day I rode him at Pontefract as I came up the stands’ rail with a couple of others and the rest took the more traditional route.

“While he is in good form at home is another that would appreciate a bit of dig ground. He has been beaten twice but if he returns to the sort of form he was at Pontefract he could be competitive from his draw.

“Nottingham is a sharp six and I don’t think it will be too dissimilar to run over five on soft ground at Pontefract.”

Wink Of An Eye came up short in his bid for a five-timer at York last time out, but Marquand is confident the William Haggas-trained Dubawi gelding, homebred by The Queen, can show his true colours in the Jockey Club Grassroots Series Middle Distance Final Handicap over 10 furlongs.

The Newmarket trainer said: “He has been really progressive this season. At York, things probably didn’t pan out 100 per cent for him as the ground would have been a bit sharp for him that day.

“He is lumping a fair weight but I’d like to think he has still got a bit more progression to come out and that he can show it here.

“It took a little while to work out how to ride him and things like that but the penny has really seemed to drop. Cut in the ground is no issue for him.

“We are coming back in trip from a mile and a half but it is an open galloping track and he should run his race.”

Epsom trainer Jim Boyle believes dual course and distance scorer Bad Company still has plenty more to offer after getting off the mark for the season on his most recent appearance.

He said: “We are reliant on the rain arriving as he is a very good horse on soft ground and the softer it is the better it is for him but he is in good order.

“He likes the track up there and everything is perfect for him as long as the rain comes as he is in great order.

“The rain arrived just in time at Sandown as it rained an hour and a half before the race but it really got into the ground.

“His mark has crept up but I think in his conditions he can still be competitive.”

Harry Dunlop is pleased to have secured the services of Jim Crowley, who will attempt to repeat his course and distance victory aboard Gentleman At Arms two starts ago in The Jockey Club Grassroots Series Stayers’ Final Handicap which takes place over a mile and three-quarters.

He said: “He has got top weight but we thought we would have another go at Nottingham again with him as he has already won there.

“Jim (Crowley) gave him a good ride from the front when he won there before. Jim gets on well with the horse and luckily we have him again.

“He likes easy ground and a mile six is his trip as over two miles he is not quite as good. The surface rode quite deep at Kempton last time but I think it was the trip that beat him.”

The Hughie Morrison-trained Sulochana, who will be partnered by Group One-winning jockey Marquand for the first time is another chasing a second course and distance victory this year.

Marquand said: “He ran well last time over a mile six on soft ground and he is also a course and distance winner on those same conditions which is a plus.

“Hughie is very good with progressive stayers, so hopefully he can continue going the right way here.”