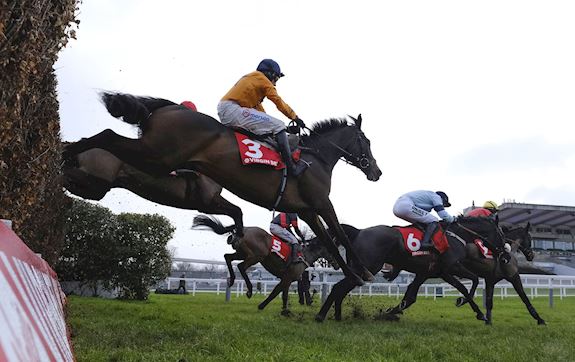 Paul Nicholls is optimistic that Pic D’Orhy can successfully pass his sternest test to date over fences by securing the first Grade One victory of his career in the Virgin Bet Scilly Isles Novices’ Chase at Sandown Park on Saturday.

The talented seven year old will bid to make it three wins over fences this season on his first start at the highest level since November 2019.

Having failed to score over the larger obstacles last term Pic D’Orhy has proven something of a revelation over them during this campaign and goes into this two and a half mile contest as a 2-1 chance with the race sponsors Virgin Bet after victories at Ffos Las and in the Grade Two Noel Novices’ Chase at Ascot.

The Johnny de la Hey-owned gelding’s jumping will come under real scrutiny at the weekend but Nicholls believes he can put in a clear round and provide the Ditcheat trainer with his fifth success in the race.

“I think having spent the first part of last season over fences has helped him as a second season novice this season.

“He is always going to take a few chances as that is the way he is. He jumped well around Ascot the last day and won well and he should have won at Newbury as well until he fell.

“He has obviously got a huge amount of ability but we have just got to get that jumping a bit more solid and get him to respect the fences a bit more.

“He is rated just below Bravemansgame, who is the highest rated novice chaser we have in the yard. He is a good horse and it would be nice for him to show that once again at Sandown.”

Sponsor Virgin Bet offer 40-1 that Pic D’Orhy can win Saturday’s Scilly Isles Chase AND the Grade One Turners Novices’ Chase at the Cheltenham Festival next month.

Virgin Bet spokesman Bobby Keyes said: “L'Homme Presse heads the market at the entry stage for the Virgin Bet Scilly Isles Novices' Chase. While in the past he has had the tendency to sometimes jump left, he looks to be a proper chaser this season. His 10 length win at Cheltenham on New Year’s Day was a visually impressive spectacle and he should be hard to beat if he reproduces that level of form.

“He won't get it all his own way however, as the Paul Nicholls trained Pic D'Orhy is highly capable of making the running himself. Elsewhere, Pic D'Orhy is officially rated 1lb better than L'Homme Presse and comfortably beat Faivoir, a nice horse in his own right, last time out at Ascot. The race currently looks to have plenty of pace and tactics are likely to be a key factor to winning here.”