Grand National winning double act Lucinda Russell and Derek Fox head to Carlisle today (Thursday) with three shots at success on what promises to be another cracking day at Cumbria’s premier jumps course. 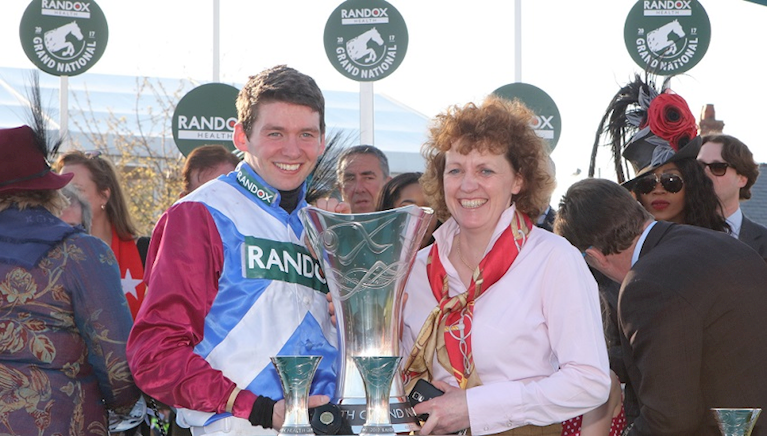 Fox brilliantly rode the Russell-trained One For Arthur to victory in this year’s Randox Health Grand National.

It was a something of a fairy tale for Fox who returned from a broken collarbone to race at Carlisle just three days before his and Russell’s famous Aintree triumph.

Fox has three rides on Russell-saddled entries at Carlisle today, the pick of those being Mumgos Debut in the 2.50 2m4f Racing UK Available In HD Handicap Chase.

The nine-year-old, who has five career wins to date, was victorious last time out at Carlisle back in April and was a winner at Perth on September 28 with Fox again on board.

Russell and Fox’s other hopes are Rossamilan, another Perth winner this year, and Itstimeforapint who will be taking his season bow 18 months after his last win came on heavy ground at Hexham.

Another jockey and trainer pairing with hopes of following up recent wins will be Will Kennedy and Donald McCain.

Kennedy romped home at last week’s Red Rum Day meeting at Carlisle on the McCain-saddled Derintother Yank in one of the day’s most impressive performances.

Kennedy has two rides for McCain on Thursday, including Dark Sunset, who is looking to make it three wins in a row having claimed victories at Bangor-on-Dee in August and Uttoxeter in July.

McCain and Kennedy follow this up with Cousin Oscar in the 3.55 Bet At racinguk.com Intermediate Handicap Hurdle who goes head-to-head with Barry’s Jack, another impressive winner on Red Rum Day.

The seven-year-old is again partnered with Kaine Wood who led him to victory at Carlisle just three weeks after an impressive three-length win at Perth. Trainer Brian Ellison will be hoping it is three from three for Barry’s Jack over the two-mile distance.

Cumbrian trainer James Moffatt has two entries. They are Munsaab, who although making his Carlisle debut has two victories to his name at his home course of Cartmel, and Idder who impressively won over the hurdles at Carlisle back in May.

Micky Hammond’s promising five-year-old Applaus will be widely fancied in the 3.20 Visit The All New racinguk.com Beginners' Chase. Henry Brooke takes the reins of a horse who clearly loves life in the north having won at Hexham and Newcastle in 2017.

Geraldine McKay, Carlisle Racecourse’s General Manager, said: “It was great to see Derek Fox make his return to racing here at Carlisle earlier this year and then to go on and win at Aintree. It’s fair to say we do like to play our part in Grand National successes stories here!

“Lucinda Russell is a regular at Carlisle and we are delighted she is bringing three horses here on Thursday for our second jumps meeting of the season.

“Once again there are some fine in-form horses such as Donald McCain’s Dark Sunset. I’m sure he and Will Kennedy will be looking to follow up their cracking win last week on Derintother Yank, who led from start to finish, by chalking up another Carlisle win.”