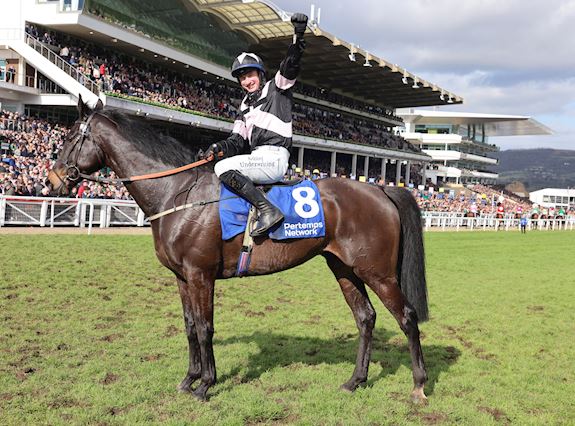 It is a second Festival success for trainer Hugh Morrison – 20 years on from his first with Frenchman’s Creek in what is now the Ultima Handicap Chase.

Jockey Tom O’Brien was also enjoying his second Festival victory. He previously scored on Silk Affair in the 2009 running of what is now the Boodles Juvenile Handicap Hurdle.

“I watched the head on on the screen and it was six of one and half a dozen of another. We came here really relaxed for a day out. We couldn’t win off this mark two years ago.

“The ground was perfect for him as it was genuine soft ground. Haydock was bottomless the other day and he can’t handle that. On his day he is a very good horse. He is a cracking horse.

“He is a great home bred. Ann Plummer bred the dam and grand dam and her daughter Mouse Hamilton-Fairley bred him.

“Rather like Frenchman’s Creek, we didn’t come here expecting anything. He has been up there and won a Grade Two. He was fourth of the same mark two years ago. He is a very good horse on his day. These are his conditions soft ground and when they go a good gallop.

“He ran a very nice trial the time before Haydock at Warwick and he was entitled to beat Alaphilippe and Sire Du Berlais as he been dropped a bit more since then.

“We were lucky it rained. Tom rode a spectacular race. We said jump off positively but he was right at the back and Sire Du Berlais was also out the back there. Tom took the brave route and he came there but he thought he was always going to get there. He said he won easy. h

“The thing about him when he hits the front he doesn’t do a lot. I think we were the winner on merit. The ground was perfect today and Tom rode a fantastic race.”

“It’s all part of the job [the stewards’ inquiry]. You’d do anything to fight… you try your best not to bend the rules, but there are other times you feel you bend them more than I did today. I was confident that the horse would hold the race; if I bent the rules I would take my punishment, but to get the win is what it’s all about.

“I’m very excited about Thyme Hill [in the Stayers’ Hurdle] and I can’t wait to get going. Soft ground should be fine; he didn’t like the heavy and gluey ground at Auteuil but he ran well to be second to Paisley Park at Ascot on ground that was described as heavy - that was wet heavy, as opposed to gluey, so soft should be still fine. It’s still wet ground here.”

Ann Plummer, mother of winning owner-breeder Mouse Hamilton-Fairley, who is based in Odiham, Hampshire, said:

“It was agony. Tom said he barely touched so why they took so long I don’t know. I nearly died! He stays forever but he is not very fast so the others get tired and he keeps going. He doesn’t do much.

“To have a winner at the Festival is unbelievable as I’ve been coming here for years. I had pneumonia two years ago so I wasn’t well enough to come here when he finished fourth.

“To come today and see him do this is wonderful. I bred the dam and the grand dam and it makes it much more special.”

“The best horse won on the day, so we’ll take our defeat. We couldn’t ask any more of Paddy (Brennan) or the horse, both of them left nothing out there. You could run that race 10 times and you’d get five apiece going either way. I thought he’d win from jumping the back of the last so I’m pretty gutted at the minute but the lads have been so supportive and this has been the plan for some time. It nearly came off.”

“Fergal’s done everything he possibly could and at the end of the day we’ve just come up against one that just pipped us. That’s horseracing, you get the joy and the sadness but I can’t thank this man enough for everything he’s done - it’s still been a brilliant day.”

“He ran a great race. It’s great fun and he’s a home bred, so we’re thrilled with him. It’s just a pity that the race took place on the far side of the track, we were this side and he won his race but he didn’t realise there was another race going on!”

“We’re happy with the run, his jumping let him down but he’s a great horse going forward.”