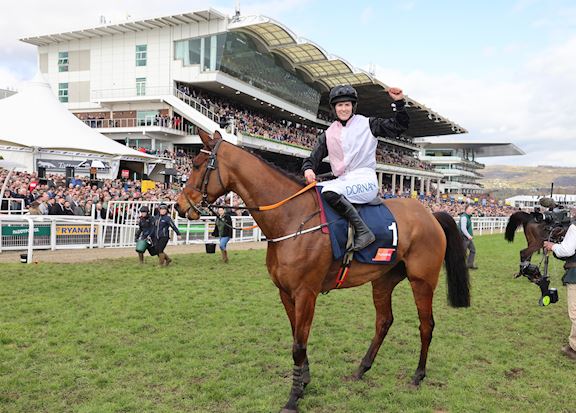 The winner was left home 40 lengths clear of Busselton with another 28 lengths back to El Barra in third.

Bob Olinger was winning for the second time at The Festival, having taken the Grade One Ballymore Novices’ Hurdle in 2021.

“We looked well beaten, obviously. I was surprised to see him off the bridle as early as he was. I thought he jumped reasonably well; he got into one at the top of the hill, I think the fourth-last,  he just put down at that and walloped that, but was ok and came back on the bridle. We still have to work on the jumping. But I thought on the first circuit he jumped really well. But I didn’t think I’d ever see a horse have him look like that, I have ever to say. I never thought I’d see a horse do that to Bob. And obviously, we all want to win but we don’t like to win like that, but it’s great to win, of course. It’s all work in progress - it’s only his third race over fences, and he’s won a Grade Three, a Grade One… it’s fantastic, but you don’t like to win a race like that.

“It was disappointing [the way he ran]. But, interestingly, Rachael said she wasn’t happy with him at all, so we’re going to get him looked into, which we would have had to do anyway if Galopin Des Champs had stood up. We need to go and dig and see what is wrong with him, because he definitely didn’t look right.

“I’d feel silly saying anything about whether he might be a Gold Cup horse or a Ryanair Chase horse after that run now, so let’s see. We need to work out what has happened, but prior to today we’d always felt he was Ryanair, Gold Cup, whatever - we don’t really mind, but today has put me back in my box. It sounds terrible when we won, but there we gho.

“Fair play to Galopin, that was some performance he put in. You lose races like that as well; it just happens. It was ironic that it was our jumping that was questionable - but this game is just mental, isn’t it? Always expect the unexpected.”

“It is fantastic to win but nobody likes winning in those circumstances. It is brilliant to see Paul (Townend) and Galopin Des Champs are both okay and that is the main thing.

“I was happy with him throughout the race. He made one or two little errors but I thought on the whole he jumped well enough. There is definitely room for improvement there. His jumping is improving the whole time.

“To be honest four out I wasn’t delighted with him and I thought I would be travelling better. I don’t know if it was the true Bob Olinger today in some ways.

“Even when I galloped up the hill he didn’t do it in the fashion he did last year. I was never going to catch Paul if he stood up. It is strange emotions but it is unbelievable to get a winner. This is one of the best horses Henry has in his yard.

“I wouldn’t be too disheartened in the manner that he finished because I know that wasn’t the true Bob Olinger today for whatever reason but look he is a fair horse and we are very lucky to have him. It is beautiful jumping ground out there. I wouldn’t like to put that (ground) as an excuse as he is a very good horse and it was heavy at Punchestown the last day.

“I was beaten today before my speed was going to come into it. He might have jumped a bit better if the ground was quicker. In summary it is fantastic to get a win.”

“We’re delighted with the run. We were in the race to try and pick up some prize money and obviously it was very unfortunate with Galopin Des Champs but we’re delighted with our run. He’ll go again this season, but there are no firm plans as to where.”

“It was a good performance from him, and we’ve picked up a lot of prize money but you’ve got to feel for Paul. Henry’s having a great week so well done to him and fair play to Joseph for having a go. We’re delighted to be taking home a nice amount.”

“I think we made the right choice running here and looking at that I think we could go back to two miles if we wanted to. We just have to smarten up his jumping in the early part of the race and I think over the shorter trip he’d have horses to accompany him. He was out on his own there today and idling in front.

“What happened at the end is just one of those things. He’d done everything right through the race.

“Paul (Townend, jockey) said he landed properly and just slipped after landing, so just one of those things. It was unbelievable up to the last, and when you consider how much ground he was losing and what effort he had put in over the first four or five fences - ballooning fences like that takes a huge amount out of a horse and I didn’t believe he’d have anything left to fight off Rachael if she’d come to him coming down the hill.

“I’m very pleased with the performance and I suppose I’m getting used to horses falling at the last round here, between first of all Adamant Approach, then Annie Power and Benie des Dieux. We are getting used to it.

“It’s disappointing, but we’ve got a sound jockey and a sound horse and we live to fight another day. And we’ve been on the other end too, getting presented with a race when another horse falls. We’ll move on now, but we have a very special horse on our hands. We can do anything we want with him now and maybe go back to two miles or two and a quarter.”