Racing returns to Carlisle on Monday – with a Grand National winning double act singing the praises of Cumbria’s premier racecourse.

Trainer Lucinda Russell and jockey Derek Fox teamed up in April to land a famous victory as One For Arthur romped home to win the world’s most famous steeplechase. 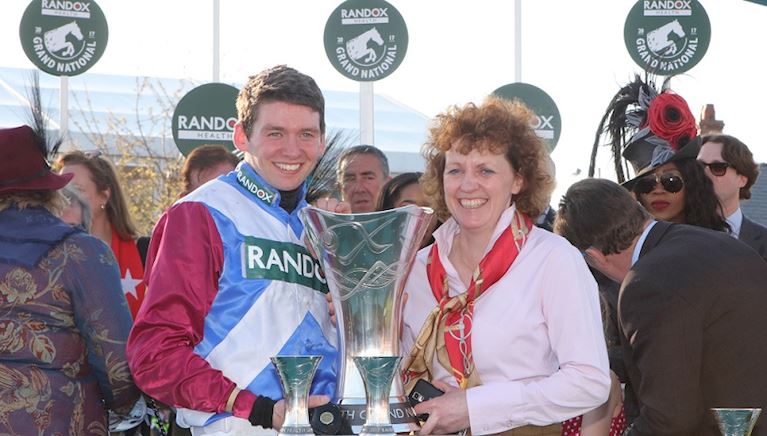 Both are regulars at Carlisle and Kinross-based trainer Russell has two runners in Monday’s Graduation Chase meeting as she looks to add to her five winners in the last fortnight.

Looking ahead to the meeting Russell said: “We’re very lucky to have tracks like Carlisle that have the backing of the Jockey Club and put on good prizes.

“They look after the ground immaculately. I don’t know how they manage to do it, but they always provide us with great ground.

“I always think when you stand in the paddock at Carlisle and look at the type of horses, they are all big strong chasers or hurdlers and the races are normally won by good horses. The course is ideal for the long distance staying chasers which we love and that we’ve always done very well with.”

Jockey Fox – who on Monday rides the Russell-saddled Argentix and Vino's Choice - has experienced the extremes of his sport at Carlisle.

As an 18-year-old apprentice it was the scene of his first jumps success. Six years later his Grand National dream almost ended in Cumbria after a heavy fall just a month before this year’s Aintree spectacular.

Fox’s mount Ryalex hit the first fence in a handicap chase – sending the jockey crashing to the ground, breaking wrist and collarbone.

It was touch and go whether the Sligo-born jockey would recover in time to take his seat at Aintree. But he made it with just days to spare, returning to action at Carlisle to prove his fitness. The rest, as they say, is history!

It had been at Carlisle in February 2011 when riding for his fellow countryman Noel Kelly that Fox bagged his first win on a British track with Jammia.

He said: “As an apprentice it was great to get that first win under my belt over hurdles and in Britain. I turned professional soon after that.”

Carlisle is also likely to feature quite heavily in Fox’s near future. He’s now stable jockey with Russell, who has a string of horses already qualified for the inaugural Northern Lights Series finals on December 3.

The series aims to promote the sport through offering more opportunities for mid-tier horses. It climaxes at Carlisle when qualifiers will compete in five £25,000 finals.

One of Russell’s qualifiers, Forest des Aigles, was ridden to the winning post by Fox at Hexham in October. He reckons the second season chaser is one to watch in the middle-distance final.

He said: “He’s a horse to look for now and in the future, he’s progressing. He handles well, jumps well and is straight forward with a nice attitude.”

Another from the Milnathort yard likely to be in the running at Carlisle is Alizee de Janeiro, a recent third over two miles at Kelso.

Fox, 25, who despite his Aintree triumph modestly describes himself as a “standard jockey”, says he loves riding in Cumbria.

He said: “For Carlisle, you want a horse that’s tough. There’s always going to be some cut in the ground and it’s the stiffest of finishes with that three-and-a-half-miles which is all uphill.

“It’s a nice track at the same time. The fences at Carlisle are very nice, they ride very well.

“There’s nowhere I’d prefer to ride a horse for the first time. You can get into a really good rhythm of jumping with the fences there.”