The Northern Lights are coming into view at Carlisle with trainers and owners looking for prize-winners to brighten the autumn days.

The Cumbrian racecourse is hosting the finals of the Northern Lights Series on Sunday December 2 with its highest ever payday of £212,000. There’s £35,000 for each of the five finals plus 30,000 for the listed Houghton Mares' Chase. 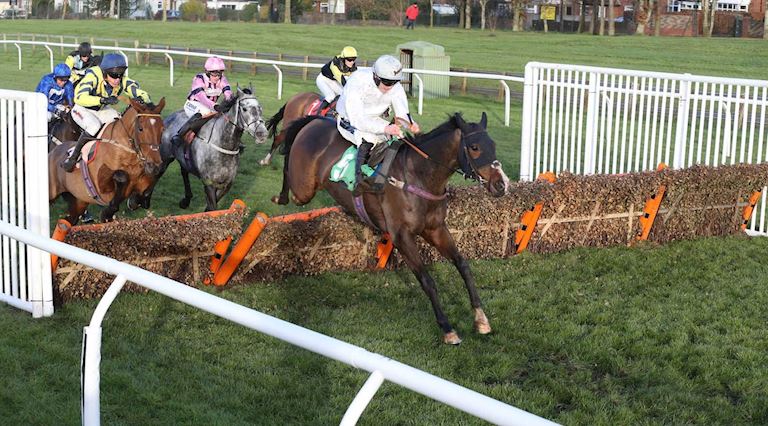 It’s the second running of the finals at Carlisle. Northumberland trainer Rose Dobbin was a winner in the series’ inaugural year with 10-1 shot Monfass (pictured above) in the two-mile handicap hurdle.

She said: “It was just brilliant. A bunch of my friends own Monfass with me. For a horse of his sort of level to be able to win like that is exactly what the whole series was aiming to do.

“I’m sure it will be really competitive this year, and it is a great opportunity for us and him to win a good race. It was just so exciting when it came off.

“We did think it was winnable on the day and he’s qualified again this year so, who knows? Of course, my friends absolutely love him. He’s been a great servant for us.”

Dobbin also has Attention Please for the 3m handicap chase.

She said: “I think it’s a brilliant idea because those kind of middle ground horses just don’t get the chance to ride for that kind of money.”

Another trainer who’s had her eye on the qualifiers throughout the year is Durham-based Rebecca Menzies.

She said: “The one we looked at as soon as the race conditions came out was Champagne To Go.

“She won recently on good ground at Sedgefield and for her handicap that should give her a lovely weight in the mares race. A big galloping track like Carlisle will suit her.

“Nortonthorpelegend was second in the three-mile race final last year when he was beaten by a neck. Last year that was his target and this year it’s been the same, but we’ve not had the most straight-forward prep with him.

“He’s pulled up his last two runs but he does really like it round Carlisle. He’s won and been placed and he goes on any ground.”

Xpo Universel was a 70-race maiden until he won at Cartmel in the summer and is a qualifier for the two-mile hurdle.

Menzies said: “We did wonder if he’d ever win but Aaron (Anderson, amateur jockey in Menzies’ yard) got a great tune out of him.

“I think two miles at Carlisle will really suit him and he goes on any ground too, so we won’t be worried if it goes bottomless.

“This was his target since the middle of the summer and there’s a lot of prize money at stake for a horse like him. He could run a big race.

“You can’t knock the money that’s being put up. We like to think there’s a bit of a plan for every horse in our yard and there has been some quite strict planning that’s gone into this. We’ve swerved other winnable races to make sure they were nice and fresh going into December.

“It should be a good day. This year people have had a little more knowledge and time to plan and you see that in the field sizes and the qualifiers. Year by year it should keep getting better and better.”

There are some intriguing names for the Class 1 Houghton Mares’ Chase with last year’s winning trainer Willie Mullins entered with Camelia de Cotte. The six-year-old is a triple winner already this year, including another listed race, the TA Morris Memorial Irish EBF Mares Chase this month.

Warren Greatrex’s La Bague Au Roi was a chase winner at Newbury earlier in the month and Donald McCain’s Lastbutnotleast will be looking to build on three 2017 wins, including over similar distance at Carlisle back in February.

Cumbrian trainer James Moffatt has Bon Chic, a 25-1 winner at Ayr this month, and Cartmell back in the summer.