The Mick Channon-trained six year-old charged away from the field at the last fence to claim the prestigious Colin Parker Memorial Intermediate Chase. 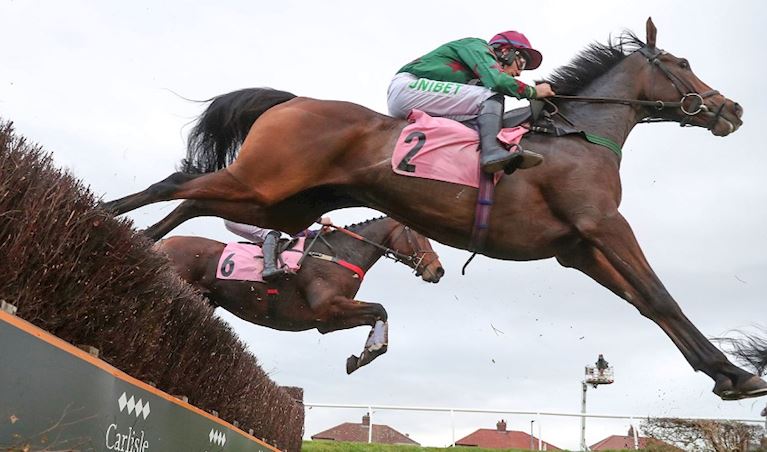 Mister Whitaker, who hit the headlines after winning Cheltenham Festival’s Listed Novices' Handicap Chase in March, is no stranger to Carlisle having won at the very same meeting last year.

But winning the Colin Parker – a listed race which has been won by the likes of Many Clouds and Waiting Patiently in recent years – is a huge statement of intent for the Irish gelding.

“After his best hurdles win last year at Cheltenham, which was a great day for him, he’s come out and is proving his class again.

“We went out at a good gallop, he was a bit fresh early on and it took a bit of time to get him settled,

“Mr Whitaker’s form was rock solid last year, he won here the same day last year on only his second run over the fences. There is room for improvement, but he is already proving what a good horse he is.”

After a close fought contest in the early stages, the race exploded into life up the home straight. Mister Whitaker stormed away at the last and was able to hold off the late charge of Happy Diva to triumph by two and a quarter lengths.

“Colin was such a popular figure in Cumbria, who sadly died at such a young age. We were delighted to welcome Colin’s wife Janet and his family here again to present to the winners.

“Congratulations to Mick Channon and Adrian Heskin. Mister Whitaker looks a top top horse. He won here last year, followed it up with a great win at Cheltenham, and we will be watching his progress with great interest.”

Elsewhere on the day, Nigel Twiston-Davies continued his fantastic early season form at Carlisle as One For Rosie charged home to victory in the opening race – The Watch Racing UK On The Go Novices Hurdle – with son Sam on board.

The Twiston-Davies double act, who landed a treble at Carlisle’s opening jumps meeting, were celebrating again as Count Meribel impressively won the second race by two and a half lengths from Jammin Master under Richard Johnson.

Elsewhere, there were wins for Jonjo O’Neill who saddled Aspden Colorado to victory in the 2m 4f Handicap Hurdle, with Aidan Coleman on board, while Jamie Hamilton led Mark Walford’s Take a Break to victory over the hurdles in the Northern Lights qualifier.

A brilliant day’s racing was brought to a close with the Keith Dalgleish-saddled Alright Sunshine winning the final race with Brian Hughes on board.

The next race meeting at Carlisle is on Monday November 12. Tickets are £15 for adults (in advance) or £18 (on the day). Under-18s free entry when accompanied by an adult. For full details go to carlisle.thejockeyclub.co.uk