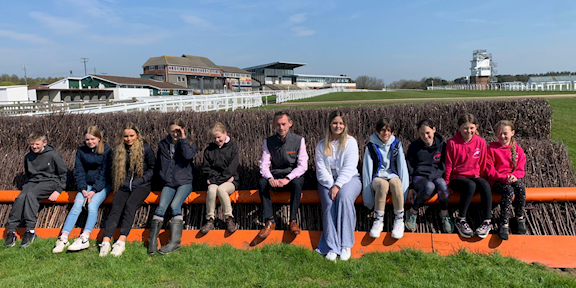 Exeter Racecourse were delighted to welcome 18 pupils from Little Margate Equestrian Centre, onto Haldon Hill on this, a warm sunny day on Haldon Hill! The pupils are all taking on a 12 week course into the racing industry, supported by The Pony Club.

The pupils, who were on their Easter holidays, were treated to a half day behind the scenes tour of Exeter Racecourse, starting with the famous Dessert Orchid restaurant where everyone learnt about the background of The Jockey Club, and how Exeter Racecourse is a bustling racecourse 365 days of the year! It was glorious, looking over the racecourse, watching the track staff put it to bed for the summer having run our last fixture of the season, some season it was!

Having learnt about the importance of C&E, Catering, and Racedays at Exeter, the pupils visited the stable yard, where every detail of the horse’s journey on a raceday was explained, what time they eat, what bedding they have, and where the horses go to prepare for the big race! Pupils were then showed the new veterinary treatment room at Exeter, which was still glimmering from its recent refurbishment. The pupils even got to learn about the British Horseracing Authority Role on a raceday including sampling, stewarding and veterinary treatment.

Onto the weighing room and the pupils were all weighing in, weighed in, and our Clerk of the Course did his best to explain the weight for age structure, and handicap system! Quickly moving on to the going descriptions and raceday routine, we treated everyone to the Jockey Club #GetYourHeartJumping video on the Steward television, with pupils then eager to see the final fence on Haldon Hill, to learn about the skill and intricacy involved in fence building. “Will we get to see a fence” one pupil asked, “Wow, they’re huge” another said.

Having won the race to the winning line, we visited the Owners’ and Trainers’ bar which took the attention of one or two of the thirsty parents “Free food and drinks all day, I want to be an owner!” -

We concluded with tea, biscuits and squash in the 1769 bar, which has a terrific timeline of the UK’s racing history painted onto the walls. The questions were coming in thick and fast, and having learnt many of the pupils were already in racing jobs for local horse trainers, we posed to them the career question! Four pupils were going to become champion Jockeys. Nobody wanted to be a Clerk of the Course, Chef or Operations Executive, and everyone wanted to be an owner! In all seriousness, Exeter Racecourse was looking at its finest in the sunshine, and having held a successful season, were delighted to inspire the next generation of racing staff, jockeys and fans!

For details about the Equestrian centre visit https://www.littlemargateequestrian.com/