The Lambourn handler is pleased with the preparation of the four-year-old son of Dark Angel, who was given a rating of 123 in the 2017 LONGINES World's Best Racehorse Rankings, making him the top five-furlong horse anywhere in the world last year.

Battaash was successful on four of his five starts during 2017. He captured the Listed Scurry Stakes in June and the G3 Coral Charge in July, both run over five furlongs at Sandown Park, and then produced an imperious display to win the G2 King George Stakes at Glorious Goodwood in early August, when coming home clear of G1 winners Profitable and Marsha.

There was a below-par fourth in the G1 Nunthorpe Stakes later in August at York, but Battaash ended the season with his best performance to date as he made all to land Europe’s premier five-furlong race, the G1 Prix de l'Abbaye, by four lengths at Chantilly, France, in October. He has not run since then.

Battaash races in the famous blue and white silks of Hamdan Al Maktoum. The owner has already tasted success in the Temple Stakes with another outstanding sprinter as Dayjur, trained by Dick Hern and partnered by Willie Carson, took the spoils in 1990 when the race was run at Sandown Park prior to a campaign that saw him land three G1 sprints and finish an unlucky second in the G1 Breeders’ Cup Sprint at Belmont Park, USA.

Hamdan Al Maktoum was also on the Temple Stakes roll of Honour in 1999 with Tipsy Creek, trained by Ben Hanbury and ridden by Richard Hills. The race transferred from Sandown Park to Haydock Park in 2008.

Dane O’Neill, Hamdan Al Maktoum’s second jockey, is lined up to ride Battaash on Saturday at Haydock Park, with the owner’s number one jockey Jim Crowley heading to the Curragh for the Irish 2,000 Guineas. O’Neill knows Battaash well, having ridden the horse four times, including to his first two victories of 2017. 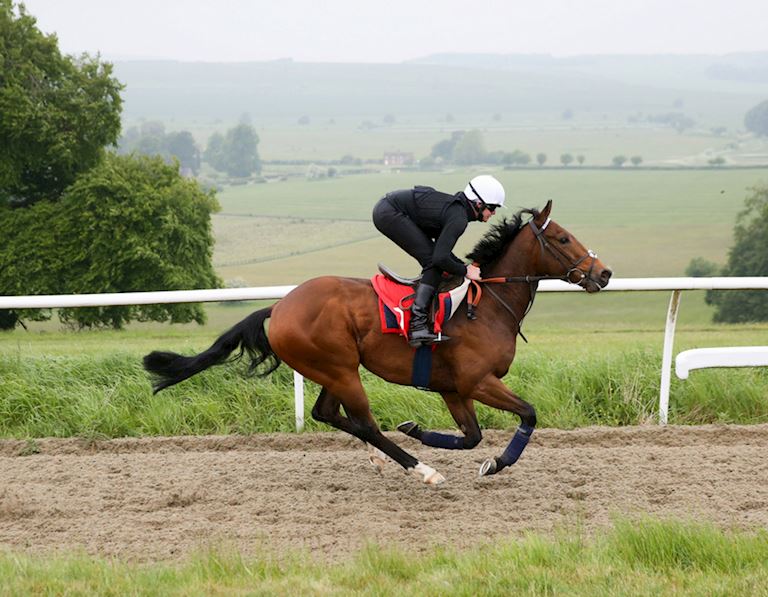 Charlie Hills said today at his Faringdon Place Stables: “We are looking forward to Saturday. We have had no hold-ups with Battaash, who is a fairly easy and straightforward horse to train.

“I am happy with his weight and mindset. I am looking forward to getting him on the racecourse now.

“We have had plenty of time to think about it [where to start off]. I just like the timeframe between the Temple Stakes and Royal Ascot, which is obviously the main target.

“He is quite a fresh and forward-going horse, so it is important that we give him a run before the King’s Stand Stakes (5f, G1, Tuesday, June 19, Royal Ascot) – the Temple looks the ideal race.

“He was so impressive in France last season and the time of the Prix de l'Abbaye tells you that as well.

“He wasn’t stopping either and galloped through the line really strong. There is no reason to say he won’t get six furlongs in time.

“Muhaarar (a four-time G1 winner over six furlongs in 2015 when champion European sprinter for trainer and owner) was a very special horse and you would never think you would have something like that again.

“Then to have Battaash a few years later is unbelievable really. It is a very exciting year for us all at Faringdon Place.

“We have all had to put up with the bad weather [earlier in the year]. It was the same for everybody across the country.

“It is amazing how quickly it changes and the horses all look so well, especially the two-year-olds who look even better than three-year-olds at the moment.

“Haydock is a beautiful, flat track and I think Battaash should really enjoy it. We can saddle him up in the stables there and it is a good lead up for him.

“He has had a couple of issues with the stalls in the past. We have had Gary and Craig Witheford down the last couple of weeks and Battaash has been as good as gold and not put a foot wrong.

“He can put his game face on and at York it obviously got to him, but he has not shown any signs of that this year.

“I think Dane [O’Neill] has probably ridden him more than Jim [Crowley] actually. Dane won on him twice last year, both times at Sandown, and obviously gets on with him well.

“He came down to ride Battaash work last Saturday and was happy. Dane is a very good jockey and I am sure he won’t do anything wrong with him.

“We have obviously got a penalty and there are some very fast horses in the race. Take Cover is a very quick horse, as are a few others. It is not going to be straightforward, but it will be nice to get Battaash back on the racecourse.”

Kirkland Tellwright, Clerk of the Course at Haydock Park, was also present at Faringdon Place today.

He commented: “Hosting the Temple Stakes and Sandy Lane Stakes on the same day has worked out well for us, but it took an amount of goodwill from others.

“Sandown Park had the Temple Stakes before us, so we will always appreciate the fact that they gave the race up for us.

“For some reason, the Temple Stakes landed on its feet for us – in our first running of the race (2008), the first six home broke the track record. Putting the Sandy Lane on the same card has reinforced the day and it is now an important day for us.

“Having horses like Battaash running in the Temple Stakes is what you dream of achieving with these G2 races, while the Sandy Lane has had a tremendous run because we have produced the last two winners of the G1 Commonwealth Cup - Harry Angel and Quiet Reflection.

“It has barely rained since our last meeting, so we are watering away this week and getting stuck in. There is a hint of a light shower on Friday morning, but nothing of note so we have rolled our sleeves up and are watering every day.

“You want a headline name like Battaash and it’s even better if he has some serious opponents. It’s the dream and we look as though we might achieve it.”

The going at Haydock Park is currently Good to Firm (watering). Eight millimetres was applied to the track on Sunday, Monday and Tuesday. A further eight millimetres will be applied today. The outlook is for warm and dry conditions, with the chance of a light shower on Friday.

Battaash was one of 15 confirmations for the £100,000 Armstrong Aggregates Temple Stakes, revealed on Monday.

Also going forward are the Tom Dascombe-trained pair of Kachy and Doctor Sardonicus. Kachy, who finished second in the 2016 G1 Commonwealth Cup over six furlongs at Royal Ascot, is on a career-high rating of 113 following a nine-length demolition of his rivals in a five-furlong conditions race at Chester on May 11.

Doctor Sardonicus joined Dascombe from David Simcock earlier this year and made the perfect start for the stable when taking a five-furlong conditions event by two lengths on Tapeta at Wolverhampton on April 9.

Godolphin could bid for its first victory in the Armstrong Aggregates Temple Stakes with the unbeaten Dreamfield (John Gosden). The four-year-old Oasis Dream colt missed the whole of last season after winning both of his juvenile starts, but made a stylish winning return in a six-furlong handicap at Ascot on May 11. He has yet to race over five furlongs.

Four-year-old filly Mabs Cross, owned by the race sponsor Chairman and CEO David Armstrong, looks another potentially top-class sprinter in the making for Co Durham handler Michael Dods. She had Havana Grey (Karl Burke) and Encore d’Or (Robert Cowell) in fifth and sixth when winning the G3 Palace House Stakes over five furlongs at Newmarket on May 5.

The confirmations also include seasoned campaigners Muthmir (William Haggas) and Take Cover (David Griffiths), who are eight and 11 respectively, plus Washington DC – one of four possible runners for Aidan O’Brien, reigning champion trainer in Britain and Ireland.

Royal Ascot-winning fillies Heartache (Clive Cox) and Different League (Aidan O’Brien IRE) are among 11 entries for the Armstrong Aggregates Sandy Lane Stakes. Since obtaining G2 status in 2015, the three-year-old contest has been won by champion sprinters Quiet Reflection (2016) and Harry Angel (2017 – the world’s best on 125 over six furlongs last year).

The excellent entries also feature Barraquero (Brian Meehan), James Garfield (George Scott) and Sands Of Mali (Richard Fahey), who were all successful in G2 company over this distance as two-year-olds.

Unfortunately (Karl Burke) captured the G1 Prix Morny at Deauville in August, but disappointed next time out when ninth in the G1 Middle Park Stakes at Newmarket.

Further quality is added by Invincible Army (James Tate), successful on his comeback in the G3 Pavilion Stakes at Ascot on May 2, and unexposed Yarmouth victor Emblazoned (John Gosden).

The action at Haydock Park on Saturday also includes the £80,000 Amix Silver Bowl Handicap (2.50pm, 31 entries) over a mile and the £47,000 Listed British Stallion Studs Cecil Frail (Sponsored By Armstrong Aggregates, 4.35pm, 17 entries) over six furlongs for fillies and mares.