Q&A with the Red Devils

Find out what the Red Devils had to say when we caught up with them earlier this week... 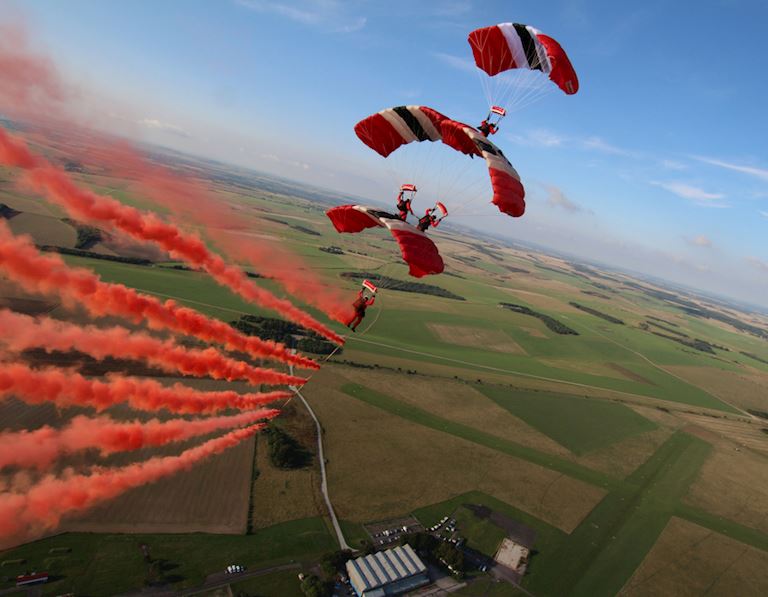 1.   Tell us about the Red Devils - a brief history of the team?

The Red Devils were formed in 1964 and became the official Parachute Display Team of the Parachute Regiment & British Army in 1979.

2.  What are the main responsibilities of the Red Devils?

The team is made up of 14 full-time soldiers from across the 3 Regular Battalions, 1 Captain Officer and 2 Reservists from the 4th Battalion of The Parachute Regiment.

Firstly you must join The Parachute Regiment and serve a minimum of 2 years in Battalion to become eligible. At this point you must attend and pass the Red Devils selection cadre. If successful you will then be welcomed into the team to progress further in your new role.

Pre-jump rituals would involve analysing the reece report, a final kit check and then lastly a quick "shake & bake" before exiting the aircraft.

We have previously conducted a maximum of 4 displays in a single day however during training we often achieve up to 10 per day depending on weather conditions, type of aircraft and location.

Our most memorable in 2018 would be our most recent display at IWM Duxford using an original WW2 Dakota which had served on operations during D-Day & Arnhem. Special guests on the day included WW2 veterans who had previously conducted operational parachute drops from the very same aircraft during the war.

8.  How many jumps have you done at racecourses?

We regularly jump at racecourses each year, our last being at The Aintree Grand National.

9.  Are you excited to jump into Haydock Park?

Of course, we're very excited to be able to jump infront of so many people for such a spectacular event!

10. What height will you be jumping from on the day?

Despite pre planning heights are often determined on the day based on the weather conditions.

11.  In terms of the weather, what are the prime jumping conditions? Aside from sunshine, what should we keep our fingers crossed for!

As the UK's leading Parachute Display Team, providing the weather is within the set limits, we will jump!

12.  What will you be getting up to after your jump at Haydock?

Most likely enjoying the wonderful hospitality and of course watching the horses race!

The Red Devils will be parachuting over the track on Saturday 26 May at 1.50pm, in a spectacular display!