Haydock Park’s new racing club will be cheering on their star filly, Not So Shy, on home turf

HAYDOCK Park’s new racing club will be cheering on their star filly, Not So Shy, on home turf today (THURSDAY, JUNE 7) 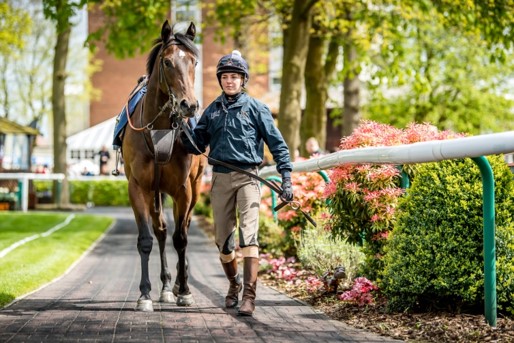 The two-year-old, trained by Tom Dascombe, last season’s most successful Flat Turf trainer at Haydock Park, saw the racecourse for the first time at Catterick a fortnight ago.

However, despite finishing seventh of ten runners at the Yorkshire track, Dascombe believes it could be an exciting afternoon for Haydock Park’s racing enthusiasts who lease the horse.

Not So Shy will take her chance in the six furlongs 188Bet Casino EBF Maiden Fillies’ Stakes at 2.30pm and Dascombe said: “Not So Shy will run a nice race today, she has come on a lot for her first experience and looks more grown up in her work.

“It is a sprint race, and she is drawn 5 in the stalls, but that’s okay because there’s no such thing as a bad draw at Haydock, and that’s what makes it one of the fairest and best tracks in England.

“It is amazing how young horses can develop, and very quickly too.

“Some of them thrive, and absolutely love the experience, the hustle and bustle of a race, while others curl up and worry about it.

“But they all develop in their own time.”

He added: “I certainly wasn’t disappointed in her first run, she did all she could do on the day and, crucially, it was the start of the learning curve for her.

“I think, though, we could see a different Not So Shy today.”

Not So Shy could be not be in better hands, Dascombe claiming 16 winners at the track last year, while jockey Richard Kingscote, booked for the ride on Not So Shy today, was crowned champion Flat jockey at Haydock Park last term.

But while Not So Shy is stepping out at the beginning of her career, Dascombe’s speedball sprinter Kachy, an impressive third in last month’s Armstrong Aggregates Temple Stakes, won by Europe’s fastest sprinter Battassh, is heading to Royal Ascot.

“The plan is still the same, for Kachy to run in the King’s Stand Stakes at Royal Ascot on Tuesday week,” said Dascombe.

“Kachy ran a solid race in the Temple Stakes.

“However, you want to win these big races, of course, but it wasn’t to be and now we go to Royal Ascot.”

Haydock Park’s general manager Jason Fildes: “It has always been an ambition of the racecourse to create a Racing club of this type and not a stereotypical horse racing syndicate.

“It is proving to be a real success story, offering a fascinating insight into racing for the members.”

Today is the first day of a busy three-day fixture at Haydock Park, with the first evening meeting of the summer tomorrow while Saturday features the Group Three Betway John Of Gaunt Stakes.

BBC Radio 2 disc jockey Jo Whiley will be playing some of her favourite hits for 90 minutes after racing on Saturday.