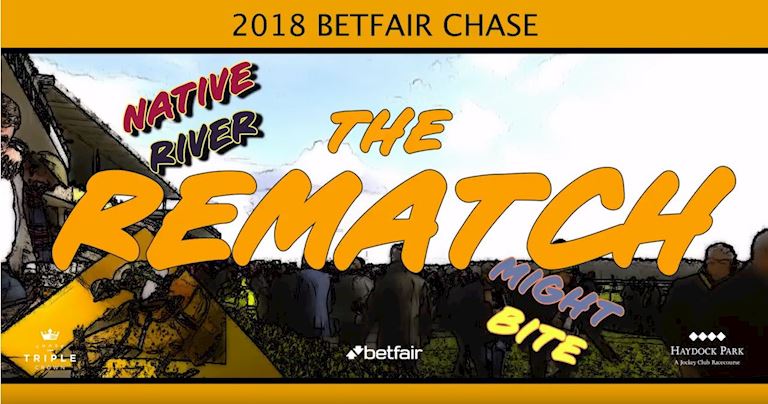 The first G1 of the British Jump season is also the initial contest in The Jockey Club Chase Triple Crown, which offers a £1-million bonus for any horse who can follow up victory in the Betfair Chase by taking the G1 32Red King George VI Chase at Kempton on Boxing Day and the G1 Magners Cheltenham Gold Cup at Cheltenham on March 15.

Native River, trained by Colin Tizzard on the Dorset/Devon border and owned by Brocade Racing, ended the 2017/2018 campaign as the leading chaser in Great Britain and Ireland, with a rating of 176 following a thrilling all-the-way victory over Might Bite in the Magners Cheltenham Gold Cup.

The eight-year-old was restricted to just two appearances last term, also winning the G2 Betfair Denman Chase for a second time at Newbury in February, and is a 5/2 chance with Betfair to make a winning seasonal return in the Betfair Chase.

Joe Tizzard, assistant to his father Colin, revealed: “Native River is in really good form. The plan is to run to Haydock in the Betfair Chase and we are really pleased with him.

“He has come back into the yard and he actually looks bigger and stronger than he has ever looked before.

“Native River came back into the yard two weeks after everything else, because he was due to run later than some of our other horses.

“We will run him slightly more this year as injury held us up until the second half of the season with him last time so we could only really focus on the Gold Cup.

“He is not ground dependent and, a bit like a lot of the top-class horses, he can handle any ground.

“If he won the Betfair Chase at Haydock, there is the £1-million bonus and that might tempt us to run him in the King George at Kempton. A spring campaign would be followed with another tilt at the Cheltenham Gold Cup as his target.

“It was amazing to win the Gold Cup and we are going to try and win another one!

“This season, we can target four or five races, including maybe Aintree or Punchestown if he came out of Cheltenham well.

“Native River didn’t win an Irish point-to-point or a bumper. Every time we have run him, he has improved and become a better horse - we don’t think he’s stopped improving.

“We think there is still more to come, which is exciting.”

Prior to his Cheltenham reversal, Might Bite had captured the 32Red King George VI Chase and the Nicky Henderson-trained nine-year-old ended last campaign with an emphatic win in the G1 Betway Bowl at Aintree in April. The 172-rated chaser is also a 5/2 with Betfair to notch up a fifth G1 victory in the Betfair Chase.

Other leading Betfair Chase entries include Bristol De Mai (Nigel Twiston-Davies, Betfair’s 9/4 Favourite), who powered to a 57-length victory in last season’s renewal and was runner-up to Might Bite in the Betway Bowl.

Native River’s stable companion Thistlecrack (16/1) looked to have the world at his feet after winning the 32Red King George VI Chase as a novice in 2016, but has made just three subsequent starts, most recently when finishing fourth behind Might Bite in the Kempton Park highlight last season.

An Irish-trained horse has yet to win the Betfair Chase, but Ireland’s champion owner Gigginstown House Stud is responsible for four entries this year including the Gordon Elliott-trained Shattered Love (14/1), successful in the G1 JLT Novices’ Chase at The Festival™ in March.

Elliott may also be represented by last year’s third Outlander (50/1) and Don Poli (25/1), both G1 winners over fences, while lightly-raced seven-year-old Disko (25/1), twice successful at G1 level as a novice chaser, could line up for Noel Meade.

“Add last year’s winner, Bristol De Mai, Clan Des Obeaux, and the four Irish entries headed by the JLT winner Shattered Love and it all adds up to a vintage renewal for the 14th running of the famous race.

“Last year’s winner Bristol De Mai currently heads the betting at 9/4 just ahead of old foes, Might Bite and Native River, who are both 5/2.

“In terms of the Triple Crown, at 20/1, we rate Might Bite as the most likely to emulate Kauto Star and win a £1 million bonus with Native River a 33/1 chance.”

A total of 39 entries for the three-mile contest include three-time G1 winner Unowhatimeanharry (Harry Fry, 20/1). Betfair’s 6/1 joint favourites are Soul Emotion (Nicky Henderson), last seen when taking a valuable handicap hurdle on the final day of last season at Sandown Park, and Paisley Park (Emma Lavelle), who was impressive when defying top-weight in a competitive handicap hurdle at Aintree last month.

Weights for the Betfair Exchange Hurdle will be revealed on Wednesday, November 14.