Old rivals Might Bite and Native River feature among an outstanding field of five for the £200,000 G1 Betfair Chase at Haydock Park this Saturday, November 24, Betfair Chase Day. 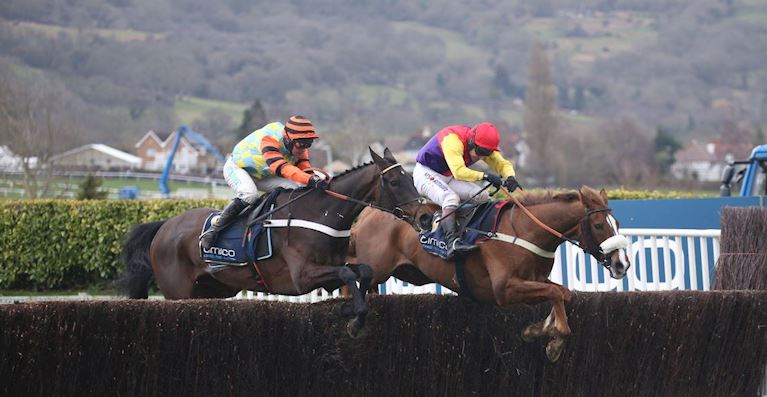 The extended three mile and one furlong contest is the first leg of The Jockey Club Chase Triple Crown, which offers a £1-million bonus for any horse who can follow up victory in the Betfair Chase by taking the G1 32Red King George VI Chase at Kempton on Boxing Day, December 26 and the G1 Magners Cheltenham Gold Cup at Cheltenham on March 15.

Native River (Colin Tizzard/Richard Johnson, 5/2 with Betfair) and Might Bite (Nicky Henderson/Nico de Boinville, Evens Favourite) served up an epic duel in this year’s G1 Cheltenham Gold Cup, with Native River prevailing by four and a half lengths on testing ground.

That was Might Bite’s only defeat in an otherwise faultless campaign, which saw him capture the G1 32Red King George VI Chase at Kempton Park on Boxing Day and the G1 Betway Bowl at Aintree’s Randox Health Grand National Festival in April.

Champion trainer Nicky Henderson has yet to win the Betfair Chase, coming closest with Long Run who was runner-up in both 2011 and 2012.

Henderson said: “Might Bite is in very good form and it is all systems go for Saturday.

“He has just been working extremely well and out of him, Altior and Buveur D’Air, he has been the easiest to get fit.

“He hasn’t had an away day, but he has just been in very good shape. Might Bite is a spectacular looking horse and he fits the Sprinter Sacre mould of just pure quality and class - he just looks that way. He looks really, really good.

“He made me very proud last year. He ran some excellent races and I think he was at his best at Aintree last time. To come back from the battle he had with Native River at Cheltenham and win there was something special. Even Altior and Buveur D’Air, who also won championship races at Cheltenham, weren’t ready to go to Aintree and Might Bite was - my admiration for him went up there.

“At Aintree, he was as straight as a gun barrel and he was like that in the Cheltenham Gold Cup. The ground from the back of the last in the Gold Cup just did him in.

“They had a lovely strip of ground on the inside all the way throughout the Gold Cup, but after jumping the last fence, you then cross courses which had been used all week and it was the wettest part of the whole course.

“I wondered whether he just got a little bit tired on that run-in and whether I should have given him a run between the King George and the Gold Cup as at the second-last in the Gold Cup he looked like he was going on to win his race.

“He faces Native River again on Saturday, but this time around, it is a different ball game. It is a different race on a different track on different ground. It is great for racing to have a showdown like this – it is going to be a proper race.

“You think about the Chase Triple Crown bonus and I am full of admiration for them, but you have to make sure these bonuses don’t make you do things you shouldn’t do. That is where I think we were right last year not to get tempted into trying to go for the Triple Crown.

“The ground in the Betfair Chase was heavy last year which suited Bristol De Mai. But you would have to think the ground this time around will suit Might Bite.

Native River’s stablemate Thistlecrack (Colin Tizzard/Tom Scudamore, 7/1), now a 10-year-old, has missed large chunks of the last two seasons due to injury. He is aiming to rediscover that brilliance he showed in the latter part of 2016 when he became the first novice to win the G1 32Red King George VI Chase at Kempton Park.

Trainer Colin Tizzard is seeking a fourth Betfair Chase victory, following on from triple winner Cue Card who scored in 2013, 2015 and 2016.

Defending Betfair Chase champion Bristol De Mai (Nigel Twiston-Davies/Daryl Jacob, 7/1) is unbeaten in three starts at Haydock Park. The imposing grey was imperious on heavy ground 12 months ago, as he strode clear for a 57-length victory over Cue Card. Trainer Nigel Twiston-Davies is chasing a third Betfair Chase, having also scored with Imperial Commander in 2010.

Paul Nicholls is the most successful trainer in the Betfair Chase, with six triumphs, and saddles the potential new kid on the block in Clan Des Obeaux (Harry Cobden, 12/1). The six-year-old captured the Cash Out In-Play With Betfair Graduation Chase on this card last season and ended the campaign with a good third behind Might Bite at Aintree.

Nicholls said: “Clan Des Obeaux is in good form and we can’t wait to run him at Haydock on Saturday.

“He is an improving young horse, though he does have it all to do in this race.

“He is at the same stage of his career as Kauto Star was when he won his first Betfair Chase.

“He is an improving six-year-old with time on his side. We are looking forward to running him.”

Betfair spokesman Barry Orr commented today: “We had hoped that the main protagonists would stand their ground and we are not disappointed.

“With prevailing conditions appearing to suit Might Bite, he is clear favourite at even money but the Gold Cup winner Native River is very strong at 5/2.

“Last year’s winner Bristol De Mai is the weakest in the betting and is now 7/1 from an opening 5/2.

“There may only be five runners but it is certainly one of the highest quality renewals in our 14-year sponsorship.’’

Betfair Chase Day offers a seven-race card, running from 12.10pm through to 3.35pm.

Over half a million pounds is on offer in prize money, with the supporting action headed by the £100,000 G3 Betfair Exchange Stayers’ Handicap Hurdle (2.25pm, eight runners).

Betfair’s red-hot 11/10 favourite for the Betfair Exchange Stayers’ Handicap Hurdle is First Assignment (Ian Williams/Tom O’Brien, 11st, including a 5lb penalty), who makes a quick reappearance after a stunning nine-length success in the Listed Regulatory Finance Solutions Handicap Hurdle at Cheltenham on November 17.