FOUR lawyers, a textile knitter, a damp proofer, a carpenter and an iron horse from Scotland are dreaming of Aintree glory after Shades of Midnight lit up Haydock Park. 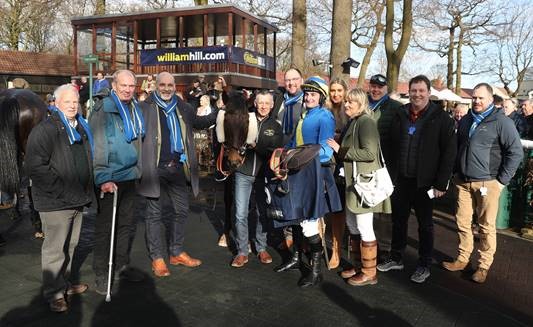 The border racing enthusiasts are the Potassium Partnership - and it is a tale to warm the heart after their stayer dug deeper than the claw of a JCB to win the Rendlesham Hurdle by eight lengths.

Nick Bannerman, who founded the partnership with his brother Rory in Hawick, takes up the story.

“Not long after we had decided to give the racing club a go, Rory’s daughter Eilidh was diagnosed with meningitis,” he said.

“Poor Eilidh nearly died, but the marvellous people at Edinburgh Children’s Hospital fought to save her.

“She was in intensive care for a long time but happily she recovered.”

He added: “The one thing that tells doctors that a patient is starting to recover from meningitis is when their potassium levels begin to improve.

“So, when Eilidh got better my brother decided on the name Potassium Partnership – and it has brought us luck ever since.”

It was a special day too for trainer Sandy Thomson, who enjoyed winning the Rendlesham title for a second time following the victory of Seeyouatmidnight in 2014.

Said Nick: “Our parents raised Shady (Shades of Midnight) as a yearling in their back field at Hawick even though they are not horsey folk.

“Sandy’s a great trainer, though, and his attention to detail with his horses is incredible.

“And he has certainly found the key to Shades of Midnight.”

Shades of Midnight ran a cracker at Haydock Park on Betfair Chase Day in November and could return to Merseyside on the biggest day of them all, Grand National Day on April 6

“There are a couple of options, but it looks like the Aintree Stayers Hurdle, so we are all incredibly excited about going there on Grand National Day.”

The nine-year-old gelding is looking to be only the second horse, after Red Rum in 1973 and 1974, to win back-to-back titles at this year’s Aintree.