EMMA Armstrong says Mabs Cross is their horse of a lifetime as the super star sprinter she bred returns home to run in tomorrow’s Armstrong Aggregates Temple Stakes at Haydock Park (SATURDAY, MAY 25) 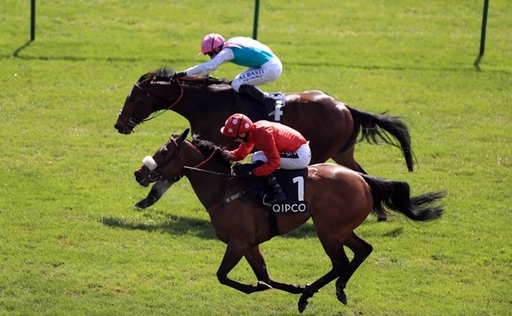 The tough as teak filly finished fourth in last year’s Temple Stakes, but her career has gone into orbit over the last twelve months.

Beaten a nose in the Group One Nunthorpe Stakes, Mabs Cross was crowned 2018 champion European sprinter after claiming the coveted Prix de l’Abbeye crown in Paris.

“Horses like Mabs Cross come along once in a lifetime, and we are very fortunate to have this very special lady,” said co-owner Emma Armstrong who bred her at Highfield Farm, Coppull.

“She’s a belting horse and to do what she has done makes us all very proud.

“It is a massive day, with Mabs Cross running in the fixture we sponsor, so I suppose that’s a bit of added pressure.

“But she doesn’t owe us anything and as long as she is okay then that is all that matters.”

“I didn’t expect her to win the Palace House again,” she said.

“I drove down to Newmarket in the horse box with my daughter to see Mabs Cross run for the first time this season.

“You are always hopeful, but she produced a brilliant show, despite shouldering a big penalty.”

The jet-heeled Meccas Angel won the Nunthorpe in 2015 and 2016 but now Mabs Cross is his undisputed stable star.

Dods said: “We thought that she had improved physically over the winter and jockey Paul Mulrennan said she felt stronger than last year, so it seems she has strengthened up.

“You don’t want to overcook them at this stage of the season, but she was the class horse in the Palace House Stakes.”

Dods hinted it could be Mabs Cross’ final year in training, adding: “We mapped out a five-race plan for her in 2019.

“She has won the Palace House Stakes, she’s in the Temple Stakes, before hopefully The King’s Stand at Royal Ascot, Nunthorpe and then Longchamp for the Prix de l’Abbeye.”

Another star sprinter Kachy, owned by Galloways bakery supremo David Lowe, comes into the contest on the back of three impressive victories.

Meantime, Calyx looks set to put his unbeaten record on the line at Haydock on Saturday as he is prepared for a tilt at the Commonwealth Cup.

The son of Kingman, who missed the 2,000 Guineas through injury, is set to run in the Armstrong Aggregates Sandy Lane Stakes on Saturday.

Haydock Park is also in action today (FRIDAY, MAY 24)