A magnificent seven-race programme at Haydock Park this Saturday, May 25, is headed by the £100,000 G2 Armstrong Aggregates Temple Stakes (4.00pm, seven confirmations) over the minimum distance of five furlongs. 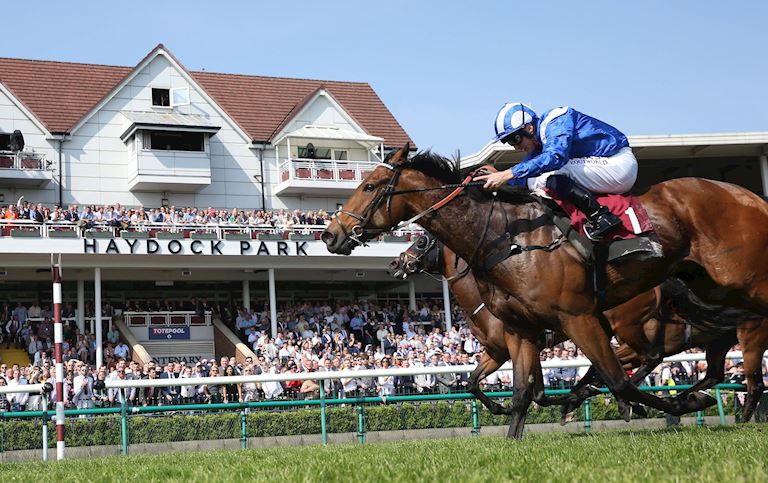 Racegoers are also set for a treat with the hugely-exciting Calyx (John Gosden) set to put his unbeaten record on the line in the £90,000 Armstrong Aggregates Sandy Lane Stakes (3.25pm, seven entries) over six furlongs.

All races on Saturday’s programme are sponsored by Armstrong Aggregates and sister company Amix, which are based near Bolton.

The seven confirmations for the Armstrong Aggregates Temple Stakes include last year’s winner Battaash (Charlie Hills), who recovered from a slow start 12 months ago to win with Kachy (Tom Dascombe) taking third and Mabs Cross (Michael Dods) in fourth.

Following last year’s victory, Battaash went on to finish runner-up in the G1 King's Stand Stakes at Royal Ascot and enjoy a second success in the G2 King George Stakes at Glorious Goodwood, both also staged over five furlongs.

Kachy is set to make his fourth appearance in the Armstrong Aggregates Temple Stakes on Saturday, having also finished fifth to Priceless in 2017 and sixth to Profitable in 2016.

The six-year-old, who is owned by Galloways Bakery supremo David Lowe, comes into Saturday’s contest on the back of three starts and three impressive victories on the All-Weather over the winter.

His most recent success came when making all the running for a scintillating success in the £150,000 All-Weather Sprint Championship over six furlongs on Polytrack at Lingfield Park on Good Friday, April 19.

Kachy’s trainer Tom Dascombe, who is based at Michael Owen’s Manor House Stables in Cheshire, said today: “Kachy is in good form and the target is the Temple Stakes.

“Kachy has to be a better horse this year. He ran at Lingfield off his highest-ever rating and everything about him makes you think he is a better horse in 2019.

“He ran well in the Temple Stakes last year when he was beaten a head and a neck and we are hopeful of another good performance.

“He is entered in the G1 Diamond Jubilee and the G1 King’s Stand at Royal Ascot and we will see how he gets on at Haydock before making any plans."

David and Emma Armstrong of the sponsors Armstrong Aggregates could attempt to win their own race with the courageous mare Mabs Cross. Following her fourth in the 2018 Temple Stakes, she went on to third in the G1 King's Stand Stakes at Royal Ascot and was beaten just a nose in the G1 Nunthorpe Stakes at York by Alpha Delphini (Bryan Smart), who also goes forward.

The five-year-old daughter of Dutch Art recorded the biggest win of her career in October, 2018, in the G1 Prix de l'Abbaye at Longchamp, France, when she had Battaash in fourth and Alpha Delphini back in 11th.

She was named the leading European sprinter at the 2018 Cartier Racing Awards and made the perfect start to 2019 when winning the five-furlong G3 Palace House Stakes for the second year in succession at Newmarket on May 4.

The main supporting race is the £90,000 G2 Armstrong Aggregates Sandy Lane Stakes, staged over six furlongs for three-year-olds and a leading trial for the G1 Commonwealth Cup over the same distance at Royal Ascot the following month.

Quiet Reflection (2016) won both races, while 2017 winner Harry Angel and last year's scorer Sands Of Mali both went on to be placed in the Royal Ascot contest.

The standout entry for the 2019 renewal is Calyx, trained in Newmarket by John Gosden. The Juddmonte Farms homebred Kingman colt won both his starts in 2018, following up a five-length Newmarket debut success with a length victory over subsequent G1 winner Advertise in the G2 Coventry Stakes at Royal Ascot in June.

After being on the sidelines for the remainder of last season, Calyx return to action with an outstanding four-length triumph in the G3 Pavilion Stakes over six furlongs at Ascot on May 1.

Lord Grimthorpe, Racing Manager to owner/breeder Khalid Abdullah, said today: “Calyx is in very good form and John has been happy with him since his run at Ascot.

“The current plan is to run in the Sandy Lane at Haydock on Saturday and then on to Royal Ascot for the Commonwealth Cup.

“He was very impressive at Ascot and we are looking forward to running at Haydock.”

The going at Haydock Park is currently Good to Firm. A generally dry week is forecast, with the chance of showers on Thursday.