Carlisle Racecourse is all set for a cracking Red Rum Day with a number of intriguing match ups featuring in the course’s first jumps meeting of the season.

Two horses – both saddled by trainers with Grand National-winning pedigrees – will aim to continue their hot streaks on Thursday (October 19th) and claim the day’s most historic race.

The 3.15 Rhodes Media Windermere Handicap Chase – the very same race won three times by the legendary Red Rum before each of his famous Aintree wins – throws up a mouth-watering prospect. 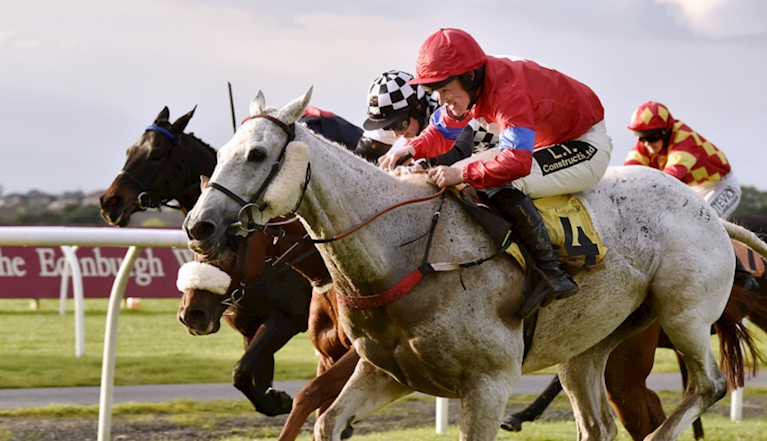 Brampton-trained Carrigdhoun (pictured above), saddled by 1979 National winning jockey Maurice Barnes, won the three-mile Windermere in 2016 and is going in search of his fourth straight win at Carlisle by attempting to repeat last year’s victory.

Although carrying one of the lighter weights, the wiley 12-year-old will not have it all his own way in the race.

Palm Grey, trained by Sue Smith who saddled Auroras Encore to win the National in 2013, is on his own hot streak having won on his last two outings at Carlisle before closing out his 2016/17 season with a win at Wetherby.

Another National connection in the historic race comes courtesy of Donald McCain – son of Red Rum’s trainer Ginger McCain. He has Federici going in the Windermere as part of his seven runners on the day.

Federici, ridden by Will Kennedy, had a mixed 2016/17 after impressing with two wins in Ireland back in 2015.

One of McCain’s entries which has enjoyed a much better time of late in Cumbria is Derintother Yank who won at Red Rum Day last year and again goes for glory over two miles in the 4.50 Racing UK On The Go Chase.

He will go up against Malcolm Jefferson’s Dubai Angel whose last appearance at Carlisle will live long in the memory – a storming 22-length win back in October.

Others to watch out for on the day include Nigel Twiston-Davies-trained Count Meribel who, while never posting a winner, has placed six times in his last six races. 2017 Grand National winning trainer Lucinda Russell has Celtic Flames entered in the opening race of the day.

“It’s great to have so many top trainers sending horses here. It is a real indication of what a challenging course we have here, one that is a real test which makes for great jumps racing for the spectator. The course is looking good so we cannot wait for the racing to begin.”