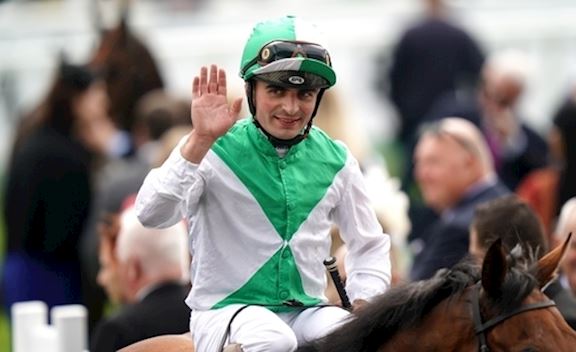 AIN'T NO MOUNTAIN HIGH ENOUGH FOR ANGEL
11/4 favourite Mountain Angel provided Newmarket trainer Roger Varian with a quickfire 44/1 double with a smooth success in the £60,000 Investec Wealth & Investment Handicap.
Hot on the heels of Defoe's win in the G1 Investec Coronation Cup, Mountain Angel, who always travelled powerfully in the 10-furlong contest, quickened up stylishly to score by a length, justifying sustained support in the betting market
The five-year-old Dark Angel entire was ridden by Andrea Atzeni, who was recording a 494/1 treble on the day (Defoe, Investec Coronation Cup & Gossiping, Investec Mile Handicap).
Mountain Angel is unbeaten this year having won over course and distance at the Investec Spring Meeting on April 24.
Varian said: "Mountain Angel did it nicely and I'm delighted to register another victory today.
"Andrea gave him a great ride and this horse likes the track.
"He has won a handicap by a length pushed out and his future for now will be in handicaps.
"Mountain Angel probably won't go to Royal Ascot as I don't think there is a race for him.
"We'll get him home and see how he is. He will probably deserve an entry in the John Smith's Handicap at York following that performance."
ATZENI IS CLIMBING THE EPSOM MOUNTAIN
Mountain Angel's victory in the Investec Wealth & Investment Handicap was the third part of a 494/1 treble for jockey Andrea Atzeni, who had already collared the Group One Investec Coronation Cup aboard Defoe and the Investec Mile Handicap on Gossiping.
Mountain Angel, trained by Roger Varian - for whom it was second win in succession after Defoe's Investec Coronation Cup triumph - was the 11/4 favourite and beat Jazeel by a length.
It was a second successive 10-furlong victory at Epsom Downs for Mountain Angel, as he won at the Investec Spring Meeting on April 24.
Atzeni said: "It's been a great week. The horses are running well, I'm on a lot of nice horses and hopefully it'll extend to Sunday and the French Derby as well. These winners make you a happier person, but riding nice horses makes my job easy.
"That last win on Mountain Angel was very smooth. He travelled nicely and took me to the front easy enough. He galloped quite strongly past horses; he's going the right way and could be anything."
RESULT
3.45pm Investec Wealth & Investment Handicap
1 Mountain Angel (Ziad A Galadari) Roger Varian 5-9-04 Andrea Atzeni 11/4 fav
2 Jazeel (Quantum) Jedd O'Keeffe 4-8-08 Jamie Spencer 7/1
3 Mr Scaramanga (Robert Moss) Simon Dow 5-8-00 David Egan 33/1
Time: 2m 6.08s
Distances: 1, ¾
Tote Win: £3.60       Places: £1.60, £2.00, £5.30           Exacta: £22.60
O'KEEFFE AIMING FOR THE JOHN SMITH'S CUP WITH JAZEEL
Jedd O'Keeffe, trainer of Jazeel (7/1), second in the one mile and two furlong Investec Wealth & Investment Handicap, was delighted with the effort put in by the four-year-old, beaten just a length by the winner Mountain Angel.
He said: "We are absolutely thrilled, he galloped right to the line. No excuses, he handled the track, handled the ground, he was just beaten by a better horse on the day.
"I've always had the John Smith's Cup in mind, but Jamie [Spencer] just said he is tailored-made for Goodwood as they get racing there some way out and he would handle the contours there too.
"But in the John Smith's they always go a good gallop and that is what he needs. I am sure he'll have an entry in there."
THIRD FOR LOCAL BOY SCARAMANGA
33/1 shot Mr Scaramanga , trained in Epsom by Simon Dow, put up a front running display to come home a length and a further three quarters of a length third in the fourth race of the first day of the Investec Derby Festival.
Dow commented: "He ran a smashing race and we are all delighted on our home track.
"It looked like he had the choke out a little bit but David [Egan, jockey] was happy with him. He said that is his thing nowadays, a mile and a quarter. Cut in the ground doesn't matter.
"We are all highly delighted and there is probably one of these handicaps in him.
"We will have to see as to what we do next. We had him as an All-Weather horse, so we were going to rest him for the summer. Now that we know he stays a mile and a quarter and he seems to be enjoying his racing again we will review it. We will see how he comes out of this."