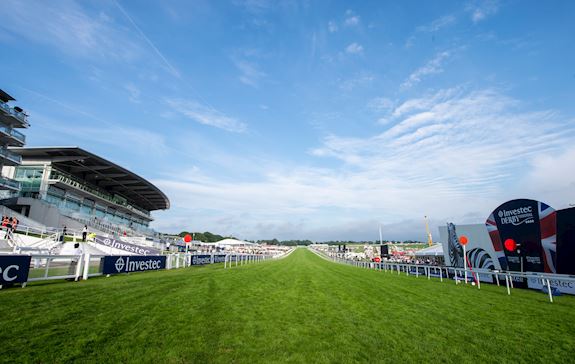 David Menuisier feels the timing of the Coronation Cup at Epsom Downs is “perfect” for Wonderful Tonight to make her comeback in.

The daughter of Le Havre is one of 18 horses remaining in contention to contest the prestigious mile and a half Group One prize on day one of The Cazoo Derby Festival (Friday 4th June) , following today’s scratchings deadline.

After tasting defeat on her first two starts last season, the Christopher Wright-owned four year old finished the season in style with back-to-back Group One victories in the Prix de Royallieu at Paris-Longchamp and the QIPCO British Champions Fillies & Mares Stakes at Ascot.

Although Wonderful Tonight is yet to be seen in action this season, the Pulborough trainer reports his stable flagbearer to be in good shape at home.

Menuisier said: “I think the timing of the Coronation Cup is perfect in early June as she wasn’t quite ready to go to the Middleton at York this week.

“We didn’t want to put the pressure on her too much for York as the Arc is the big aim this season and she will have a sequence of runs ahead of that run in France on the first weekend in October. If we start in June with her that would be fine.

“Although the timing is right we would only really contemplate it as an option if it was really wet as I don’t think galloping downhill would necessarily be for her unless the ground was soft. You have to have entries in races like this though in case the ground is in her favour.

“She seems a stronger filly than last year and looks lovely in her coat. Her muscle definition looks great. It was fantastic and very sporting of her owner Christopher Wright to keep her in training this year as a lot of owners would have retired her at the end of last season.”

The William Haggas-trained Al Aasy could make his debut at the top table in the Coronation Cup, providing he follows up his comeback victory in the Group Three Dubai Duty Free Finest Stakes at Newbury over the same course and distance in the Group Three Al Rayyan Stakes on Saturday.

Angus Gold, racing manager to Shadwell Estate Company, said: “Al Aasy ran very well at Newbury first time out and William has been happy with him since.

“We will see how he gets on this weekend at Newbury and take it from there but William had planned to go to the Coronation Cup.

“At Goodwood last year when he was last in the Gordon Stakes nothing appeared to come to light but he was a very immature horse physically and maybe it all came quick enough.

“William did the sensible thing and gave him plenty of time off and hopefully it will pay off this year, which it looks like it is.”

Gold added: “I think Owen has a race lined up for Hukum at Goodwood next week. He just knocked a joint the other day on his comeback at Sandown Park in the Gordon Richards Stakes so he missed a few days but he is back in training now.

“Given what happened we were happy enough but we always knew the mile and a quarter was going to be too short for him and at the time Owen said some of his were needing a run.

“I’m sure he will be better as a four year old but he will need to step up again if we are going to look at something like a Coronation Cup.”

Aidan O’Brien is responsible for nine of the remaining entries in the mile and a half prize on June 4th, which he is seeking to win for a record-extending ninth time.

Featuring among the Ballydoyle master’s entries is last year’s Derby winner Serpentine and Love, who claimed The Oaks 12 months ago, along with recent Group Three Ormonde Stakes winner Japan and dual Group One winner Mogul.

Other notable entries going forward for the race include the William Muir and Chris Grassick-trained Pyledriver, and last year’s Prix de l’Arc de Triomphe runner-up In Swoop from the yard of French handler Francis-Henri Graffard.

The next acceptance stage for the Coronation Cup is at the confirmation stage on May 29th, when there is also a £18,750 supplementary entry stage.