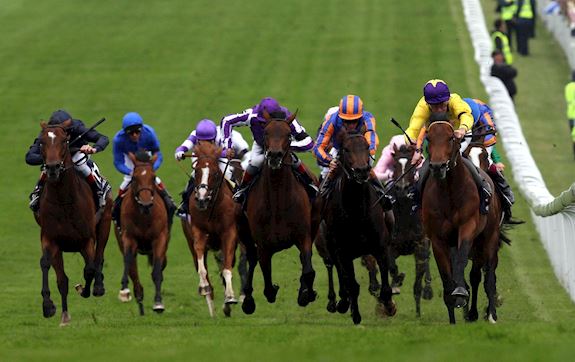 Mick Kinane believes Bolshoi Ballet possess the “perfect mind-set” to strike gold in this year’s Cazoo Derby and follow in the hoofprints of his illustrious sire Galileo on the 20th anniversary of his Classic victory in the Epsom Downs showpiece.

In recent years no horse has left a greater impression on the Derby than 2001 winner Galileo who has gone on to sire a record five winners of the race, a figure former jockey Kinane expects to be six following the conclusion of this year’s renewal on Saturday June 5th.

While the betting suggests Bolshoi Ballet is the horse everyone has to beat in this year’s Cazoo Derby, Kinane has drawn further optimism that he is number one in trainer Aidan O’Brien’s pecking order after taking the same route to Epsom Downs that Galileo did 20 years ago.

After making a winning return in the Group Three Ballysax Stakes at Leopardstown over 10 furlongs on 11th April, Bolshoi Ballet jumped to the head of The Cazoo Derby market when following up at the same level over course and distance in the Derrinstown Stud Derby Trial just under a month later.

Kinane said: “Bolshoi Ballet has taken the route Galileo took all those years ago by taking in both the Ballysax and Derrinstown, which are strong Epsom trials.

“Sometimes the winners might not quite win The Derby but they will always be in the fight at Epsom and are always at the forefront of Ballydoyle runners in the race.

“Epsom is tricky and you just never know how it is going to work out but he would be my pick to win the race.

“He looks like a very easy horse for Ryan (Moore) to ride. He can ride him in front, he can drop him in. The horse seems to be happy with whatever he wants to do.

“He seems to be a very intelligent horse and the type of horse you would love on your side at Epsom.

“Things can change dramatically and a lot of horses are overawed by the track and hustle bustle of it. He does appear to have the mind-set of a horse that will handle The Derby.”

Although Kinane expects Bolshoi Ballet to prove tough to beat, he feels there is a strong contingent of UK-trained challengers standing in his way of attempting to provide Ballydoyle master O’Brien with a record extending ninth win in the race.

He said: “I like Ed Dunlop’s colt John Leeper, out of Snow Fairy, it is nice to see him there and you would hope he would be a contender.

“I like the Dante winner Hurricane Lane and I think if the ground was on the easy side, he could be a major player as he has done everything asked of him so far.

“I think it could be a good race this year. Roger Varian’s horse that won at Lingfield (Third Realm) won quite well and if a horse acts at Lingfield, you know they will act at Epsom which is a huge plus factor. It looks like it is going to be a very exciting race.”

While Kinane’s days of riding may now be over he fondly recalls the emergence of Galileo, which started back in October 2000 when the son of Sadler’s Wells slammed his rivals by 14 lengths in a mile maiden at Leopardstown.

Kinane said: “He just blitzed them that day in Leopardstown. From the get go, he was a very special individual. Any horse can win by such a distance but it was the ease that he did it and he was always going to be better as a three year old.

“I won on him in the Ballysax and I missed riding him in the Derrinstown, which is Ireland’s best Derby trial, as I was riding in the French Guineas but he appeared to be ahead of anything else Aidan had at the time.

“Milan came along later in the year but at that point there was nothing to take to The Derby ahead of Galileo. He was the standout at that time.”

Having conquered all before him in Ireland a new challenge awaited Galileo in taking on the best of the British on his first start over a mile and a half at Epsom, but it was one he would ultimately prove more than equal to.

Kinane said: “I was lucky enough when those gates opened I was on my own there and it was a very easy race to deal with. I was in control all the way and he travelled well and he skipped round. It was one of the few Derbys you could really enjoy because you were in control of what was around you. He was so balanced and he went around there on rails.

“I let him level out and get balanced and let him surge on. Once I did quicken, I knew the race was over. He was totally dominant. It was nice coming down Tattenham Corner knowing you had everything in control all around you. He was a winner every step of the way. My hand was never forced at any stage with him, we moved when I wanted to move with him.

“Even if there was a horse going well behind me they weren’t going to match him. When you ride those good horses there is always something under the bonnet and it is always a great sensation.”

Though Kinane, who turns 62 next month, also tasted Derby success aboard Commander In Chief in 1993 and Sea The Stars in 2009, he still admits to this day that Galileo remains his favourite ever ride in the race.

He said: “If you asked me to pick a horse at the beginning of June to ride in the greatest Derby, if you could re-run them all together, I would pick Galileo as he was so mature at that time of year and well suited to the track.

“He was a very mature three year old at the beginning of June which was a huge help. He was a beautifully sized horse, a little over 16 hands.

“He got better through the summer but we knew we had a finished article which is hard to get in the first week in June and I would probably pick him as my favourite Derby horse.

“Like him, his progeny are very genuine and very tough and he has passed that down and his legacy will be around for a long time.”