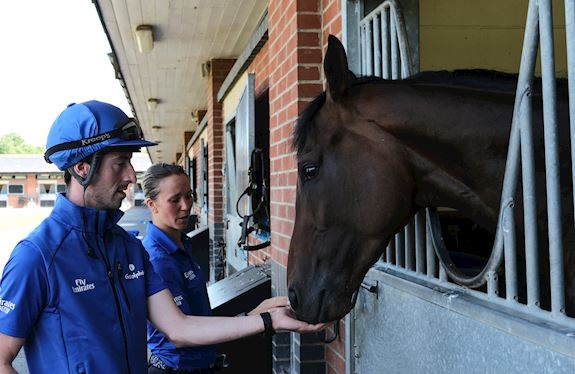 When Adayar streaked to victory in Saturday’s Cazoo Derby no one was prouder than Josh Crane, the man who rides him every day at home.

A former apprentice jockey, Crane never got the chance to take part in a Classic during his days in the saddle, but as he watched his gallops partner win the world’s greatest Flat race from the sofa of his grandmother’s house in Cambridge, he admits it was a feeling of “pure euphoria”.

But while the 29-year-old is loving life at trainer Charlie Appleby’s yard, Crane hopes to enjoy working with power of a different kind by turning his passion for flying aeroplanes into more than just a hobby.

Crane flies recreationally at the moment after qualifying as a pilot three years ago but admits he has already got one eye on switching careers, possibly even flying the planes of Godolphin sponsors Emirates.

He explained: “I got my private pilot’s license in 2018 and I’ve bought into a syndicate that flies a few planes out of Duxford. At the moment I get to ride fast horses and fly fast planes!

“It would be nice once I’ve stopped riding to transition into being a pilot. I bet Sheikh Mohammed has never had an employee that has ridden a Derby winner for him at home then worked for Emirates!”

For now though, Crane is enjoying cruising on the gallops of Newmarket on a daily basis rather than at 35,000 feet, a move he made after deciding to call time on his career as a jockey.

Having partnered a handful of winners as an apprentice during his time spent with now-retired Newmarket trainer Chris Dwyer, he initially joined Saeed bin Suroor before switching to team up with Appleby last March.

He said of Saturday’s achievement: “It’s great to add on to the CV. It is definitely bragging rights in the yard.

“I watched it at my Gran’s in Cambridge as she is big into racing so I said I would go around in the afternoon and watch it with her. She was thrilled, it was brilliant.

“Adam (Kirby) had him sat handy and got him across on the rail, so there were going to be no excuses if he got beat. But I was shocked at the turn of foot he showed on Saturday as he has always been a galloper.

“You had to have him up there otherwise everything else would have been too fast for him. The way he showed that turn of foot against Group One horses was exciting, but it was just pure euphoria.”

Having spent the winter months riding out for Appleby in Dubai it was only when he returned in February that Crane was partnered with Adayar. However, even in that short space of time he has noticed plenty of improvement.

“I got him on the first day back here in early spring and I’ve been on him ever since. He had a bit of a quirk about him but now he is in a routine he just flows.

“He comes out of his box, trots around in front, and goes up the gallops in front. He is such a big horse and he just needs to just roll on and have nothing hold him up.

“That is the best way to keep him fit. He rolls back in with not a bother on him and walks back into his box. He is in a good place at the moment and in a good routine.

“He has just developed and just looks better and better as he has gone along.”

With Adayar widely available at 40-1 on the morning of The Derby, Crane admits he had a small each-way wager on his equine partner, who he believed was overlooked by bookmakers until a late surge before the race saw him go off at 16-1.

He said: “I thought he was definitely an each-way chance as he finished second in two Derby trials.

“Third Realm only beat him just over a length at Lingfield and he was 11-1, so Adayar at 40-1 was way overpriced. I thought if he gets the ride that he did get then he was always going to be there with a good chance.

“I did back him each-way. I got him at 28-1 the day before they declared and after all that rain they had on Friday he was 40-1 and I couldn’t believe that so I had a bit more on him on Saturday in between lots.”

For now Crane is happy working in furlongs and yards, but at some point the time might come to step up to airmiles.