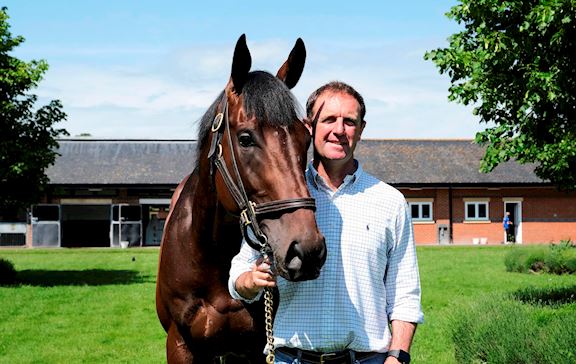 Charlie Appleby today described winning The Cazoo Derby for a second time as a “surreal” feeling and admitted even he was shocked at the acceleration Adayar showed to win the world’s greatest Flat race on Saturday.

Jockey Adam Kirby put the disappointment of losing the ride on John Leeper just three days before the race behind him to win the Epsom Downs Classic in style.

Appleby was keen to point out just how important it is for him and his team to win the biggest races in the calendar and to have now trained two Derby winners was very special to him.

The trainer, who is based at Moulton Paddocks in Newmarket, said: “It was very much in our minds that what we needed to achieve when I took over the license was firstly it was to try and train winners because as in any sport, winners breed success. I felt we got that ball rolling early doors and then when you get the nicer horses come along, hopefully you are able to deal with them in the right manner.

“It is something, that when I was given this job to train for Godolphin I didn’t want to turn up in races for the fun of it I wanted to be competitive and to do that on a world stage. To have trained two Derby winners is of course surreal. 2018 was a breakthrough year for myself in dealing with a Derby winner and a Melbourne Cup and Breeders’ Cup winner. It is an experience you take away from that and to produce another one (Derby winner) is huge.”

But Appleby, who saddled Masar to Derby glory in 2018, revealed he had been too busy watching Hurricane Lane at first and assumed his William Buick had made “a winning move” on his stablemate, before realising Adayar was on the brink of an historic victory himself.

The Godolphin trainer, who also revealed that Adayar is likely to appear next in the King George VI and Queen Elizabeth Stakes at Ascot, said: “On the Wednesday morning Hurricane Lane and Adayar worked together and most of us would have said Hurricane Lane was the horse that had a bit more spring in his step and zip about him on that occasion. I knew they were all fit and well but I just thought this horse would appreciate stepping up in trip.

“When I watched Masar win I stood in the same position under the grandstand and unfortunately the television went off so I had to switch and watch on the television across the track. At the time I still had my eye on Hurricane Lane as William (Buick) had made his move, which I thought was a winning move and I took my eye of Adayar.

“It wasn’t until I picked up the race commentary that Adayar had skipped probably a length and a half clear and once he had done that I was confident he would put it to bed as the one thing he was always going to do was gallop strongly to the line.

“The one thing that surprised us all, and to this day it still surprises me, is that acceleration that he showed. It’s been well documented about Adam’s (Kirby) ride and the gap that he had to take - it was very much a brave man’s route but he had a brave horse underneath him…

“To have trained two Derby winners is of course surreal.”

Appleby is now looking forward to watching Adayar take on his elders for the first time after earmarking the King George VI and Queen Elizabeth Stakes at Ascot as his next target.

The Frankel colt would be attempting to become the first horse since Galileo, Adayar’s paternal grandsire, in 2001 to complete the same Group One double and provide Appleby with a breakthrough win in the mile and a half prize on July 24th.

Although Adayar holds an entry in the Dubai Duty Free Irish Derby at the Curragh on June 26th, Appleby feels that the King George will come at the perfect time for his latest stable star, and also expects it to help determine which route he takes for the remainder of the campaign.

He said: “He has come out of the race great. As you saw he went on the seawalker yesterday morning and he has been out for a jog this morning and has been turned out in the paddock and he has shown his wellness. All signs are good so far.

“Without rubber stamping anything the discussions that are taking place at the moment are that we will give this horse a bit more time and look towards going to a King George with him.

“I think timing-wise it suits him and also we will have tested our mettle a bit against the older horses.

“After that we can see what he is like against the older horses there and if he happens to win a King George we can work back from an Arc. If he gets beat in a King George then we revert back to our original plan which was going down the St Leger route.

“I think, personally, looking from the outside having won neither race, I would rather pinpoint one as we all know in the autumn it is a big ask to do a St Leger then an Arc.”

Jockey Kirby had looked set to miss out on a ride in The Cazoo Derby, having being replaced aboard the Ed Dunlop-trained John Leeper by Frankie Dettori last Wednesday.

But Appleby was quick to offer the 32 year old rider the chance to partner Adayar and was praised by Kirby for his loyalty before and after the race.

Appleby added: “Adam has been a huge part of the team since the day I took over. He understands what we want. He knows the individuals and he knows the pedigrees but more importantly he knows what we are trying to achieve.

“Adam will educate them in the right manner to get the best out of them at the right time of their career. He is a good friend, like they all are.

“We all went round to Adam’s on Saturday night after The Derby. It was great to see Adam and his family happy but it’s great the amount of support he has got in the racing industry.”

While it is Appleby’s name on the door of Godolphin’s Moulton Paddocks Stables he has been quick to acknowledge that Adayar’s victory is very much a team effort.

He added: “First and foremost I must say congratulations to Sheikh Mohammed and the whole team at Godolphin.

“I must mention the team at Kildangan Stud as for many years we have been trying to breed a Derby winner and to produce two Derby winners in three years is a fantastic feat for them.

“It is all very well me taking all the plaudits but without any of them it doesn’t happen. They are all walking around on Cloud Nine this morning and deservedly so.

“I look at myself as the orchestrator. I’m the man lucky enough to be picking up the prizes but it is a huge team effort. From my own personal view I am very proud. To have trained two Derby winners is of course surreal.”

Meanwhile an outing in the Irish Derby appears to be on the agenda for Hurricane Lane, who lost his unbeaten record when finishing third behind Adayar.

Appleby added: “I was delighted with Hurricane Lane. He was the horse I thought in the paddock looked magnificent and I thought he took the preliminaries very well.

“What did surprise me, but we took it as a positive, is that he is very much learning on the job there. He showed his inexperience. Going into The Derby I thought he was one run short of what I would have liked to seen.

“He came off the bridle a bit earlier than I expected but his class got himself back into a position that he would be in the mix at the right end.

“I’m delighted with how he has come out of it and the plan with Hurricane Lane is to head straight to Ireland.”

One Ruler could be in line for a quick turnaround, with Appleby hinting that after finishing sixth in The Derby he could now be dropped back to a mile and a quarter next Thursday at Royal Ascot for a tilt at the Group Three Hampton Court Stakes.

He said: “We will drop him back to 10 furlongs. James said he didn’t handle the track particularly well but he didn’t see it out either. We might look at something like the Hampton Court, we will see what his wellbeing is like.

“He would carry a penalty in that from his Autumn Stakes success but we could look at something like that or wait for an Eclipse.”