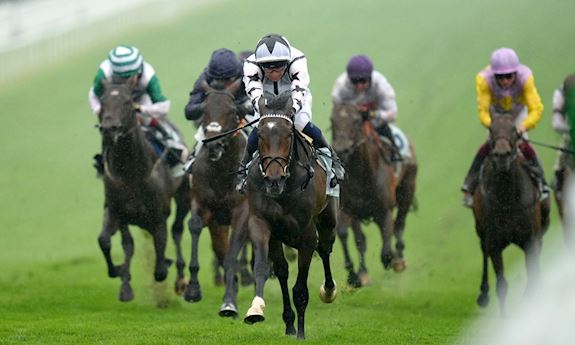 Trainer George Boughey celebrated victory with his first ever runner at Epsom Downs as Oscula landed the opening race of the 2021 Cazoo Derby Festival.

The filly was a 15-2 winner of the Cazoo Woodcote EBF Stakes over 6f, following up her victory at Brighton just 11 days ago. A two year old daughter of Galileo Gold, Oscula stayed on resolutely to take the honours by three lengths under jockey Mark Crehan.

A delighted Boughey said: "That was a pretty good performance, I think. Her work had been good, and we intentionally took her to Brighton before to give her a chance to come down the hill.

“We didn't really have Royal Ascot aspirations before. We thought we might take her to the Woodcote and the Empress, at Newmarket, but Mark (Crehan) got off the horse at Brighton - and he's ridden a lot of our two-year-olds this year - and he was very bullish.

“It was a great performance. She's very quick, but she's by Galileo Gold and there's plenty of stamina in her pedigree, so I think she will get a mile. She's a long filly who's still quite immature. You probably couldn't see it today because of the weather, but she hasn't really come in her summer coat yet. She's got a lot of upsides.

"She probably does show enough speed for five furlongs at the moment, but I do think she'll get further, which is another string to her bow.

"I think Royal Ascot may well be on the agenda now. I'll chat to Nick [Bradley] and see what the owners want to do, but the Albany Stakes has got to be a consideration. She made her debut at Kempton and five days later went and won well at Brighton, and only a few days later she's done that. It would be a pretty quick back-up from a big day, but we'll certainly be looking at it, yes."

Crehan, riding his second Epsom Downs winner said: “She went down lovely and came back even better. She handled Brighton well and that was the idea if she handled Brighton she would handle Epsom and she has done that. I got racing early with William (Buick) which probably wasn’t ideal but we got away with it here.

Asked about a potential run at Royal Ascot, he replied: “That is what I’m thinking as well to be honest. She has won well but I didn’t expect her to win that well - she is clearly improving.”

Nick Bradley, syndicate manager for owners Nick Bradley Racing, said: “Everything went according to plan. We got a great draw in stall two. The plan was always to grab that rail.

“She did it at Brighton and she has done it again here. I’m delighted for all the owners. The first and foremost thing is that Robson Aguiar recommended this horse. He has done all the work with her before she went to George’s. He told me she was a filly of high quality.

“It is his (Aguiar’s) groundwork that has made her win today. Without that none of us would be here. Going to Brighton certainly helped but Robson recommended this filly to us in January and he was spot on.

“It (going to Ascot) won’t be too quick as she is as tough as nails. It is just Ascot is a very different test compared to here. I don’t know where will be next. What has helped her here is her stall position and her ability to get out and grab that rail and boss the race. It will be hard for her to do that at Ascot but we could consider it, but at the moment I’ve not come up with a plan.”

Tom Dascombe, trainer of runner-up Flaming Rib (3-1), said:  "Ours is a nice horse so the winner must be pretty good. Well done to them."

William Buick, who was aboard the runner-up, said: "He's a nice horse. He didn't mind the ground, but he didn't really love the track, like a lot of two-year-olds. I think at Royal Ascot you'd look at dropping him back to five furlongs in either the Norfolk or the Windsor Castle, and he'd run very well in either of those."

William Jarvis, trainer of third placed Maybury (33-1) commented: "I was thrilled with that. He's going to be a nice horse in time. We threw him in at the deep end here and the draw didn't help us, but I'm not making excuses. He ought to win a maiden race anywhere in the country."

Silvestre De Sousa, rider of Maybury, added: “It was a good run to finish third. He’s still very green and babyish but this should have taught him a lot for next time.”

Following the running of the Cazoo Woodcote Stakes, the going was changed to Good to Soft (from Good, Good to Firm in places in the back straight).