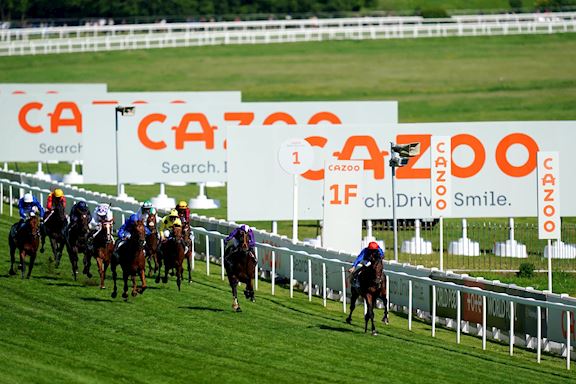 REACTION FROM BEATEN JOCKEYS AND TRAINERS AFTER THE CAZOO DERBY

Owner Kiavash Joorabchian said: "It's very, very exciting. It's the first time I've been involved in The Derby and he's run a great race. It was a fantastic run. Richard (Hannon) and Rossa (Ryan, his retained rider, who is currently on the sidelines) always loved this horse and always spoke about him very highly. Today he proved it, and that's only his third run. You have to remember he's quite inexperienced and he's going to get better from here, and he's going to be brilliant. Richard has a lot of belief in the horse and thinks he can go further and further, so we are very excited.

"I remember when we bought him Ross Doyle was very keen on him. Since then we've been patient with him and it's proving to be very successful, as finishing second in the Derby is not an easy thing to do. We are a young operation - still a baby operation - and we are up against the big Goliaths.

"I'm loving being in racing."

Jockey David Egan said: "What a run! I followed the third round as I thought he was a horse who would take us into the race, and I got a lovely run up the inside. I committed for the inside and went for a gun run and he was tough to battle through the gap. The winner got first run and quickened away, but we were a game second. Although he's a maiden he could win a Group One. Everyone's thrilled."

Trainer Richard Hannon said: "He's always been the most gorgeous horse, so I was stunned when he didn't win his maiden at Doncaster. He travelled like a really good horse but didn't handle the undulations.

"This is a massive day for the owner. There's more to life than winning The Derby, and it's just what he needs.  He wanted to come here and we always thought he was very good. He's got loads of horses and that will cheer him up.

"We've got enough money now from this to throw at some fancy entries."

Trainer Charlie Appleby said: “He’s finished third in a Derby and is going to be a contender in some of the other big races in the year."

Jockey Kevin Manning said: "I had a good run all the way but he just didn't pick up in the straight. The ground may have been a bit dead for him but it was a good run."

Jockey Andrea Atzeni said: “It was a pleasing run. I followed the winner through and he just got a little bit tight for room but he stayed on quite well and didn’t disgrace himself. He’s still a young horse, very lightly raced and it was a nice run.”

Trainer Aidan O’Brien said: “I won’t make any excuses because I don’t want to take away from any other horse, but I would say that he probably likes really nice ground and it just didn’t work for him today. We’ll try again. I don’t think it was stamina but it was lifeless – whether that was from the ground I don’t know. He had a perfect position and it was just lifeless.”

Jockey Tom Marquand said: “He probably melted a bit just beforehand - we travelled beautifully throughout and probably just galloped the legs off him over a mile and a half on this ground. We’ll probably come back a couple of furlongs and hopefully see him back to his best.”

Jockey Frankie Dettori said: “It was just too far for him at this stage of his life. We’ll go back to a mile and a quarter.”

Jockey Ben Curtis said: “My race was very straightforward. We jumped out, led and everything went perfectly. I thought I’d pick up nicely heading into the straight and then I just lacked maybe for a gear up the home straight.”

Jockey Declan McDonogh said: “He was disappointing. He got a lot of bumping around and had a tough trip but he probably just wasn’t ready for the experience.”